Over the past century, poultry breeding has evolved from a hobby into an entire industry 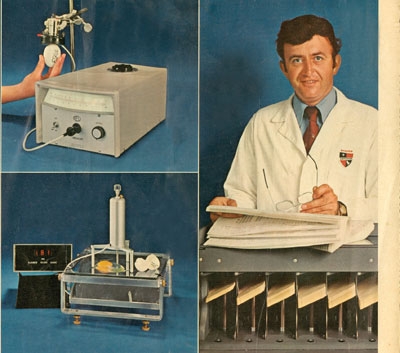 This Shaver advertisement is circa 1960 and was published with Spanish text.

My association with Canadian poultry breeding began early in 1967, when I moved from an academic position at Wye College – then the agricultural school of England’s London University – to working at Shaver Poultry Breeding Farms Ltd., as research coordinator. At that time, the breeding industry was evolving rapidly from relatively humble beginnings into an international business. The forces underlying the evolution of the industry were several: firstly, there was the capacity of breeders to harness the science of genetics for the improvement of commercial poultry. Additionally, the rapid expansion of both the egg and poultry meat fields transformed from relatively unimportant, disorganized, segments of agriculture into financially viable and successful consumer-oriented industries.

During the period from 1912 until the late 1960s, breeding had undergone significant changes and developments. With the emergence of Mendel’s pioneering studies of plant genetics (first reported in the 1850s and rediscovered in 1905), scientists began to investigate whether the same principles applied to animals, especially chickens, since they were plentiful and easy to work with.

Commercial breeding can be said to have begun when some farmers decided to make choices among the birds available for reproducing. These choices were, in the early days, almost exclusively based on appearance; physical characteristics could be emphasized and to some extent, modified so that a degree of uniformity could be established, thus differentiating individual farmers’ stocks.  With the invention of the trap nest, it became possible to obtain individual performance records, although these were not widely used until the 1930s and ’40s. Geneticists had found that variation in physical traits such as comb type, plumage and skin colour, could be explained using Mendel’s work, but they had difficulty explaining traits such as body weight, egg production and mortality, which were not divided into discrete classes, but varied on a continuous basis. However, the serious breeders developed progeny testing to a fine art, and
were able to make significant improvements in egg production and other commercial traits.

By the outbreak of the Second World War, many breeders, including Donald Shaver (aged 19 at the time), had established themselves locally as sources of baby chicks, and most sold hatching eggs, breeding pairs or trios, to other breeders. Across Canada, every small town or village would have had one or two hatcheries, some just using internal sources of hatching eggs, and others purchasing improved stock from outside sources. The process was labour-intensive and most of the hatcheries were small, inefficient and only operated on a seasonal basis. Customers were small, too, with few owning more than 100 birds.

In the late 1940s, the breeding industry began to develop more rapidly. When Donald Shaver returned from war service, although his original stocks were lost in a fire, he quickly re-established himself in the breeding business in Galt (now part of Cambridge), Ont. There were many similar breeders across Canada, and in most of the developed countries of the world, but developments were delayed in Europe due to the war, but serious breeding companies emerged in the United States. Prof. Goodale developed the Mount Hope strain of White Leghorn, which was widely sold and probably still contributes to some of today’s hybrids. Kimber Farms in California employed its first professional geneticist, Dr. W.F. Lamoreux, in 1943.

By the 1950s, geneticists were beginning to understand how genetics worked with commercial traits, but the resources necessary for the useful application of this knowledge to a professional breeding operation were not cheap. They were quite beyond the capability of the average small-town breeder, and those who developed the complex breeding infrastructure knew that they needed more than local markets to support such an investment. Thus, the system of franchise, or distributor, hatcheries was born, in which the local hatchery obtained male and female parent breeders from a primary breeder, grew and mated them, and used the resulting hatching eggs for the production of commercial chicks.

In 1967, Shaver Poultry Breeding Farms Ltd. had at least seven hatchery distributors in Ontario alone, plus others in most Canadian provinces and large ranges of franchised distributors were also spread across the United States. Many had originally had their own breeding programs, but chose to become distributors instead – one of these, Demler Farms in Orange County, Calif., was one of Shaver’s larger franchise hatcheries. It eventually merged with an egg production company and changed its name to Dairy Fresh, which in turn became part of Cal-Maine Foods, currently one of the United States’ largest egg companies.

Of course, competing breeders had similar distribution systems to support their ever-growing research and development programs. By the early 1970s, commercial poultry meat and egg production breeding in North America was dominated by approximately 20 primary breeders that initially specialized in one or two products. Shaver gained commercial prominence with its Starcross 288 breed, a White Leghorn cross. The company quickly expanded to both brown-egg layers and broilers, since the same sales force could, it was believed, support these different products. Many primary breeders specialized only in broiler stocks, and some bred exclusively either male or female strains.

Although meat stocks were selected primarily based on growth, conformation and feed conversion, egg layer stocks had to be subject to highly complex selection programs involving full pedigree breeding, individual identification, trap nesting and so on. The exact selection criteria and breeding methods became closely guarded secrets. No longer were breeders willing to sell each other stocks, and in fact went to great lengths to prevent competitors from acquiring their pure lines. When commercial stocks consist of two-way crosses, risk of strain piracy is high. Thus, the use of three-way or four-way crosses became common.

The 1960s were also the time when long distance air travel became economical, so that not only passengers, but also day-old chicks, could be transported halfway around the world in 24 to 36 hours, thus opening international markets to those breeders willing to go after them. Shaver was the only Canadian breeder to thoroughly exploit international markets: at their height in the late 1970s they were selling in more than 90 countries, and had company-owned (or joint-venture) breeding farms in the United States, England, France, Germany, Pakistan and Barbados. Both domestic and international sales were still supported by technical and veterinary expertise from their headquarters in Cambridge. These were the days when most breeding companies produced detailed, printed management guides for all of their products.

Until the 1960s most breeding companies were privately owned, but as capital demands expanded, there was a greater need for external funding sources. Shaver sold a part-interest in his company to Cargill Inc. in the early 60s and the balance when he retired in 1985. Other breeders, particularly in the United States, tended to sell out to larger companies to help facilitate their expansion. In the 1970s, a number were sold to pharmaceutical companies (Pfizer, Merck, Upjohn and others), but whatever synergies were expected failed to materialize and most of these relationships were later abandoned.

In this process, the number of primary breeders continued to shrink, through erosion or mergers. And the slow shift back to poultry-oriented companies having control of the breeding process began. The franchise system also gradually broke down, as breeder-owned or joint-venture hatcheries replaced them, although this did not happen in Canada, largely due to the system of supply management, which keeps commercial flock sizes lower than, for example, the United States.

In terms of Canadian activity, the Institute de Selectionne Animale (ISA) has a strong presence in the former Shaver facilities in Cambridge, Ont., where research and development continues on white-egg stocks, and from where grandparents and parents are shipped to the United States and other overseas markets. Lohmann has a grandparent farm and hatchery in Brantford, Ont., also the source of parent stock for Canada, the United States and other markets. Hybrid Turkeys continues to operate primary breeding and distribution facilities in and around Kitchener, Ont.

Multiplication and distribution of commercial stocks continue to evolve. Since the 1970s most integrated broiler businesses have established their own breeding farms and hatcheries. This is less so in the egg industry although several of the largest companies in the United States have their own hatcheries. More common is the establishment of breeder-owned or joint venture hatcheries, which have largely replaced the franchise hatcheries as the primary distribution method for egg-type chicks.

Distribution systems for egg stocks in Canada have remained mostly as franchised hatcheries, as stated previously, due to relatively small commercial flock sizes resulting from supply management. Broiler hatcheries in Canada vary: some are independent; some, such as integrated production companies, own others.

Thus, in the past 100 years, poultry breeding in Canada has evolved from hundreds (or perhaps thousands) of small, independent farms that did very little in the way of selective breeding, to the point at which most breeding work is done by a handful of multinational companies whose products are distributed and multiplied on an international basis. Canada has both contributed to, and benefited from, this exciting evolution.

By the first decade of the 21st century, ownership of primary breeding poultry organizations had diminished to the point at which breeding work is controlled by very few companies, listed in the following table. 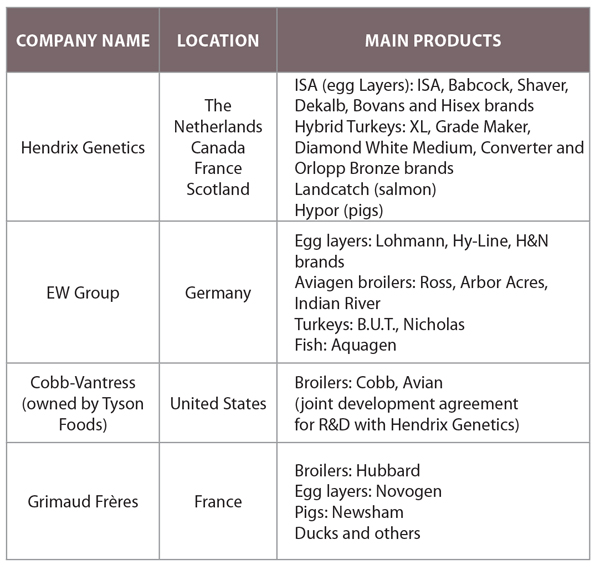