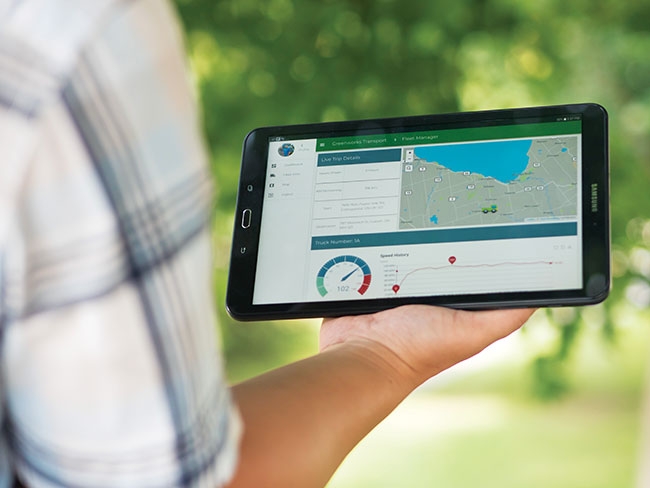 Technology that monitors environmental conditions inside livestock trailers will contribute to improved animal welfare, according to a two-year research project that tested remote wireless sensors. The Canadian Animal Health Coalition (CAHC) partnered with Transport Genie Ltd., an Ontario-based technology company, to conduct the research that wrapped up this spring.

“Electronic monitoring is a step forward in providing livestock transporters with the tools they need to be able to monitor their loads effectively,” says Jennifer MacTavish, CAHC chair. The Coalition, whose objective is to work towards better welfare for all livestock and poultry, spearheaded the national research project with funding from the Canadian Agricultural Partnership AgriAssurance Program.

“We already have high standards of livestock hauling, but this initiative will make a positive difference,” MacTavish says. “Ideally, if we make it easier for the drivers to make objective decisions, then the livestock in their care will benefit from further improvement in welfare.”

Smart-sensor technology
The Transport Genie system uses smart sensors to monitor temperature, humidity and other environmental conditions inside stock trailers, providing critical information to drivers, dispatchers and livestock managers to ensure animal safety in transit. For instance, when conditions inside the trailer fall below an acceptable range, the sensors send a wireless signal to the driver for corrective actions. Braking, acceleration and the duration of rest stops are also monitored.

The project tested the technology in different climatic conditions over long- and short-haul distances using a variety of trailer designs and hauling multiple species. Luckhart Transport, a livestock trucking company specializing in humane transport of animals based out of Sebringville, Ont., tested the sensors and provided feedback.

“Transport Genie was very receptive to our suggestions. Not only do they want the sensors to work, but they want them to be easy to use and reliable,” says Angie Hurst, vice president and co-owner. “The use of real-time temperature monitoring of animals in transit is something that the industry really needs. It is preventative care, which is crucial to animal welfare.”

CAHC ahead of regulations
CAHC instigated the project in advance of new animal transport regulations for feed, water and rest intervals as well as for checking livestock in transit.

According to MacTavish, providing livestock haulers with the tools to help them comply with the regulatory requirements easily and practically was important. “Putting regulations into effect for better welfare is a good thing, but we also need the tools to make it easier for the industry to meet new requirements,” she says.

Hurst applauds CAHC for its leadership. “I believe CAHC has played a critical role in getting this product developed. It is reassuring to see the coalition embrace technology to better the transport of animals.”

Electronic monitoring systems provide a valuable tool to help ensure livestock and poultry are healthy, comfortable and properly cared for during transit. “The consensus is that these systems work and are vital to supporting the industry in demonstrating accountability. At the end of the day, we’ll end up with improved animal welfare,” MacTavish says.