A boost for turkey breeding

Genomics project aims to improve the health, welfare and productivity of Canadian turkeys. 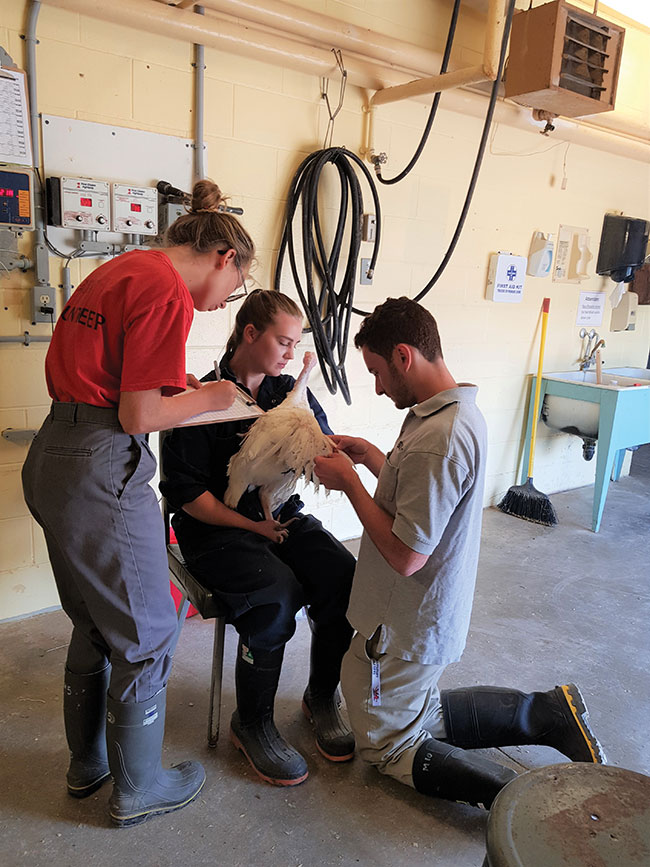 Researchers analyzed corticosterone levels in feathers from over 7,000 birds for insights into the impact of stress. PHOTO CREDIT: Christine Baes

New research is making the benefits of genomics available to Canada’s turkey industry. Hybrid Turkeys has teamed up with the University of Guelph to adapt technology already being used in laying hens and pigs by its parent company Hendrix Genetics to bring genomics-based breeding to turkeys.

Genomics will allow Hybrid to improve the accuracy of the genetic information it gets through the DNA of its birds by linking together DNA and phenotypic performance; it will also accelerate the breeding process.

It was Ben Wood, formerly a geneticist with Hybrid Turkeys and now an associate professor in the School of Veterinary Science at Australia’s University of Queensland, who first approached Christine Baes with the idea for the project when Genome Canada was seeking research proposals using genomics-based technologies several years ago.

Baes is a professor in the University of Guelph Department of Animal Biosciences and Canada Research Chair in Livestock Genomics. She has extensive experience in genomics in the dairy sector, and now heads the five-year project to improve the health, welfare and productivity of Canadian turkeys. The work is focused in three main areas: meat production; meat quality; and health and welfare.

Project premise
“The whole premise of the project is to connect these three areas of traits and make sure we have a really balanced and economically feasible breeding program,” Baes explains. “If birds are stressed, they won’t grow as fast and the meat won’t be as good.”

According to Baes, the poultry industry as a whole but turkey in particular has been highly successful in breeding to increase meat production. That said, meat quality and health and welfare traits have been a key focus as well.

The challenge is developing a breeding system that focuses not just on specific production traits, but that those traits are also easy to measure in large number of animals, are economically feasible to include and that the breeding program is balanced with equal weighting of the different novel traits.

Baes and her team began with DNA samples from one male and two female Hybrid turkey lines. They started collecting phenotypic traits related to meat quality and production and health and welfare.

“The main premise of the project is to implement genomic selection in turkeys, so you take a piece of DNA and associate the genes in the DNA with the specific traits we want,” Baes says. “Then we come up with the optimal mix of genes so the commercial product is the best that it can be.”

Different pillars
Under the meat production pillar, the team is looking at carcass components, allometric growth and overall production value. The meat quality work includes meat colour, its sensory properties like taste and juiciness. In both areas, they are developing and implementing digital analysis to make it easier to measure those traits within a specific line of birds.

The health and welfare aspects of the project proved to be a bit more challenging, with Baes admitting the team didn’t really know how to start. So, they turned to turkey producers for help, asking farmers what they thought the actual problems in their flocks are.

“That’s never been done before in Canada and it gave us an idea of what they’re facing, from digital dermatitis and leg problems to why birds are dying,” Baes says. “If we understand why they’re happening, we can address through breeding.”

An analysis of corticosterone levels in feathers from over 7,000 birds gave insight into feather growth and how stress bars on the feathers can help identify at what age birds feel stress. Work related to egg production and broodiness helped identify genetic differences in birds naturally inclined to that condition so it can be avoided in future breeding activity.

And a study in collaboration with North Carolina State University into blackhead disease has provided data that will help determine what genes make some birds more susceptible to this than others. A final main analysis involved looking at levels of inbreeding and how to manage and understand its implications.

Actionable results
As part of the project, Baes and the team also developed an actual statistical methodology that they used to examine each of the traits, one focused on random regression that, although used in dairy, was never before applied in poultry. The second built on causal relationships that help identify specific traits that cause other traits.

According to Baes, the project has shown an increase in accuracy of genomic evaluations of 30 to 60 per cent compared to conventional evaluations. Ultimately, farmers will see better birds, which is what drives the industry’s commitment to research, believes Hybrid’s R&D Director Owen Willems. “The main goal of our research is to produce actionable results that can contribute to a more sustainable industry through progress in areas that address evolving market needs, trends and customer feedback,” he says.

The project, slated to wrap up by the end of 2020, is now in its final few months.