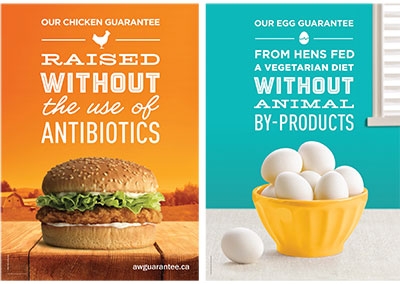 When asked if A&W was trying to stand apart from other fast food chains with its recent marketing campaigns (above), the company said, “Our guests told us that this is what they wanted.”

In September 2014, A&W Foodservices of Canada announced itself as the first national quick service (fast food) restaurant in North America to serve eggs from hens fed a vegetarian diet. A month later, the chain became the first in North America to serve chicken raised without the use of antibiotics. These initiatives follow a move made last year relating to the chain’s beef products. In September 2013, A&W (which is 100 per cent Canadian-owned and with 819 locations is the nation’s second largest hamburger restaurant company) began serving only beef raised without the use of hormones or steroids. The chain characterizes the consumer response to this change as “phenomenal.” In terms of the response to the chicken and egg campaigns, A&W says that at this point (mid-November) “Canadians are voting with their stomachs and the response has been fabulous.”

To get the details on A&W’s egg and chicken campaigns, we contacted the chain’s Chief Marketing Officer Susan Senecal. We first asked her when A&W had started planning the move to only serving eggs from hens fed vegetarian diets, as well as chicken raised without antibiotics. “In September 2013, we became the first national fast food restaurant to serve beef raised without the use of hormones or steroids and our guests loved it,” she says. “We then began asking what other changes they would like to see, and guests told us very clearly that how their chicken and eggs are raised and produced is very important to them.”

We also asked if there were other reasons behind the campaigns – perhaps to stand apart among fast food chains – and the answer was no. Senecal says “Our guests told us that this is what they wanted, and by taking action quickly, we’re now seeing them respond with more visits to our restaurants.”

When asked why A&W is choosing to promote eggs from hens fed vegetarian diets when chickens are actually natural omnivores (who will eat plant matter as well as insects, snails and so on if foraging outdoors for themselves), Senecal again focussed on customers. “They told us they would rather have eggs from hens fed a vegetarian diet without animal byproducts – and we agreed,” she says. “Our chickens are fed a diet of wheat, corn, soy meal and vegetable oil as well as some probiotics and prebiotics.”

SOURCING EGGS
All of the eggs A&W uses are sourced from Canadian farms across the country. Have there been issues with getting enough of these eggs, or might there be challenges in the future, if demand rises substantially? “The great news is that egg consumption at A&W has gone up because Canadians like the new eggs and are eating more breakfasts with us,” Senecal notes. “Our suppliers and farmers have been fantastic about responding to our changing needs and have worked with us to ensure that we have plenty of supply of eggs from hens fed a vegetarian diet without animal byproducts. We are confident that we won’t run out.”

A&W is also committed to having all of the hens from which it sources eggs living in enriched housing by the end of 2016. A&W has already been sourcing from these facilities for quite some time, and right now over half of the eggs they use are from enriched facilities. These are located in several provinces, including Ontario, British Columbia and Saskatchewan. Senecal says their intention is to source only from Canadian farms and that they would like to be able to source from provinces across the country. She acknowledges there have been “some challenges” presented by all the changes A&W has made to their beef, chicken and egg sourcing, but adds that “one of the most rewarding and interesting parts of the process is how it has brought us so much closer to the people who grow and supply our food.”

A&W is also emphasizing the “green” nature of some of their other products. Onions for their onion rings are sourced from Gills Onions in California, which A&W calls “the first operation in the world to produce ultra-clean, renewable electricity from onion waste.” Their sweet potato fries are processed at a facility that A&W says is the first frozen food manufacturing plant on the planet to have earned LEED Platinum certification, the highest distinction available to green buildings. A&W sources greenhouse tomatoes, which it considers more environmentally friendly than field grown.

EGG GROUPS RESPOND
Regarding the effect the A&W campaign might have on general Canadian consumer preferences for eggs from hens fed a vegetarian diet, Egg Farmers of Canada (EFC) does not feel it is its place to speculate. We also asked EFC how much it sees production of these “vegetarian diet” eggs growing, and how much it has grown over the last five to ten years. “We are very proud at EFC to be producing such a wide range of speciality eggs for consumers,” responds Alison Evans, EFC Director of Communications and Public Affairs. “Canadian egg farmers respond to consumer demand by offering a choice of eggs at the grocery store as well, including classic white and brown eggs, and specialty eggs such as free-run and free-range, and vegetarian-fed.”

Al Sakalauskas (executive director at B.C. Egg, the organization that oversees the province’s egg industry) says they are not sure how many farmers in B.C. are producing “vegetarian diet” eggs. “We know Omega-3 eggs have a strong market here compared to the rest of the country, and it’s still showing growth,” he says. “Omega eggs are from both caged and non-caged housing systems. There are a few different Vitamin D-enriched eggs on the market, and that market is growing as well.”

It’s important to note that B.C. Egg does not define eggs from hens fed special diets to be specialty eggs. “The way a bird can be housed at a facility is not easily changed, but diets can be changed at any time,” Sakalauskas notes. (In the case of organic eggs, they are sourced from hens fed organic feed, but these hens are housed in facilities quite different from conventional facilities in terms of things like more room per bird, access to the outdoors and natural light.) Sakalauskas says there are no eggs available in B.C. so far from hens raised in enriched housing, but notes it is a trend being established across the country and will therefore likely be found in B.C. at some point in the future.

“Egg sales are strong,” he concludes. “We’ve wrestled the cholesterol scare down, and now many dieticians and doctors are saying to the public that an egg every day is ok. With the financial stress on the country since 2008, eggs are seen as an inexpensive protein source, and are being used for more than breakfast. Other proteins such as beef, pork, fish and chicken are getting more expensive.” Sakalauskas also observes that breakfast items are one of the strongest-growing areas for fast-food restaurants. “Meals on-the-go are very popular, and egg breakfast sandwiches are a high-value item for these restaurants as there is very little wastage with them.” A&W is certainly among the fast food outlets that are hoping to maximize on this trend.