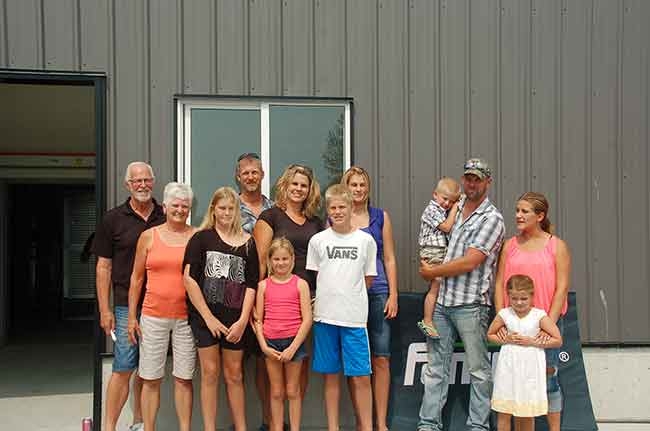 A large increase in egg quotas combined with a new B.C. Egg Marketing Board (BCEMB) order increasing the minimum space/bird are forcing B.C. egg producers to consider how best to meet the new requirements.

Since the BCEMB has not outlawed caged egg production (as some U.S. states have done), some producers have chosen to simply add extra footage and extra cages to their barns and reduce the number of birds/cage. Others have decided to make a complete change in their operations.

Ken Vanderkooi of Kenettas Farms chose the latter option. Aug. 12th, a week before the first layer barn was to be populated, he invited industry to tour his brand new state-of-the-art multi-million dollar farm.

Not just the barns and equipment are new. Vanderkooi has been farming in poultry-dense Abbotsford but his new farm is located across the Fraser River where the nearest poultry barn is about a kilometre away.

“I am isolated over here but still only half an hour from Abbotsford,” Vanderkooi says, adding “after avian influenza hit the area in 2004, I said it wasn’t going to catch me a second time.”

He bought a second farm in Nanaimo on Vancouver Island (operated and now owned by his son, Dwayne) “to be away from all the farms here in the valley” but continued to farm in Abbotsford.

He almost waited too long to move the rest of his birds. Just over a month after starting to build the new farm, AI again surged through the Fraser Valley but, fortunately, he and most other local farmers escaped unscathed.

New Barn Features
The new farm includes two 40X450 foot layer barns and a 36X255-foot pullet barn. All three barns are built with the Octaform system with its food-grade PVC-finish.

The layer barns have tunnel ventilation with TPI shutter inlets instead of doors while the pullet barn has a two-stage ventilation system, also with TPI shutter inlets. New to B.C., the TPI inlets keep the tunnel ventilation system slimmer, eliminate the need for an outer alcove and better direct the air. When inlets first open, they direct the air towards the ceiling but when the system fully kicks in (400 cubic feet/minute), the shutter position forces the air to the floor maximizing airflow through the barn.

As isolated as the location is, as impressive as the buildings are, as innovative as the ventilation system may be, they pale in comparison to the equipment within: the Valli enriched colony system. Although Valli international sales manager Paolo Zazzeri notes there are already “many” units in the prairie provinces, this is the first in B.C.

Vanderkooi says his son Jon, who will run and eventually own the farm, selected the system.

“Jon is responsible for everything we have done here, including the barn design. He had seen the Valli system working in Italy and told me that’s what he really wanted,” he says. “I agreed as he has to be happy because he is the one working the system and the one who will eventually have to pay for it.”

Vanderkooi admits the system is unlikely to increase productivity but will improve livability, noting it meets the requirements of the Humane Society of the United States (HSUS) and other animal welfare advocate groups.

“I believe this is where the industry’s future is,” he says.

The system includes 711 “colonies” in three tiers. Each colony is 10 feet long and 5.91 feet wide and designed to accommodate 72 birds, giving the entire system a total capacity of 51,192 layers. This gives the Vanderkoois plenty of room for future quota increases as their current quota holding is about 45,000 birds.

They can even increase their flock size well beyond 51,000 birds in future as the barns are tall enough to accommodate a fourth tier.

“We use heavy-duty steel construction so we can go up to 12 tiers if we need to,” Zazzeri states.

Colony features
Each colony includes a feeding/living area with LED lighting and a darkened nesting area. The feeding area includes 12 cm of feeding space/bird and 15 cm of perch/bird. There is both a central feeding system and an external feed trough. In an interesting innovation, there is a perforated guard the birds step on as they access the feed trough. The perforations are intended to shorten the nails.

Strips hanging in the nesting area keep light to a minimum, a plastic mesh on the floor keeps birds from touching wire while they are laying and a cover on the outside grate prevents them from accessing the feed trough.

The egg belt is 14 cm wide and guarded by an egg saver wire and shocker wire. The wires lift up several times a day to release the eggs onto the belt. The belt is programmed to move three times a day so the entire belt is filled even though 98 per cent of eggs are being laid in the small nesting section of each colony.

“The egg belt has capacity for two days lay although most farms do egg collections once a day,” Zazzeri states.

A manure dryer and blower unit running down the centre of the colony ensures manure is relatively dry. The manure belt has a support every foot and discharges into an external manure storage building.

“We have built enough storage so we only have to empty it once a year,” Vanderkooi says.

The pullet barn has 1332 rearing cages in three rows of three tiers each. Each cage measures 1000 X 705 mm and intended to hold 20 birds for a total capacity of 26,640 birds. Although the piping for the manure dryer has been installed, it is not being used.

“We are going to put at least one pullet flock through without the dryer and see how it goes,” Vanderkooi says.

Although this is the first such installation in the province, Apperloo says it will not be the last. Another is being installed in December and several other farmers have expressed serious interest.

“We have been incredibly busy,” Apperloo says, “with the change in regulations and today’s low interest rates, farmers are investing in new barns and new equipment. We have put in 40 aviaries in the last three years as well as conventional cages and the Valli enriched colony system.”