A look at skip-day feeding 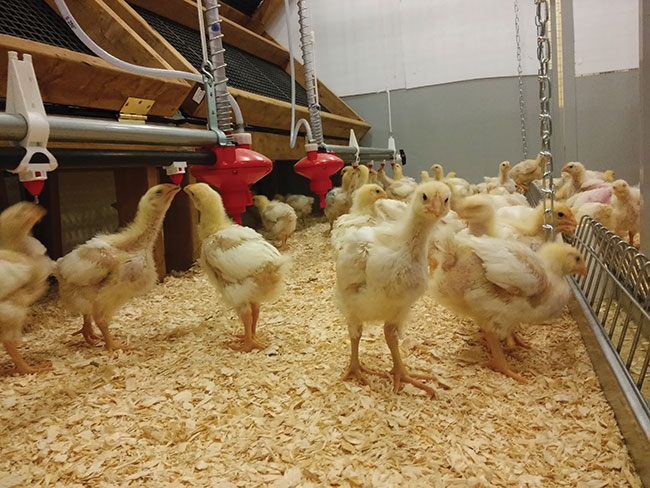 Aitor Arrazola, a PhD candidate with the University of Guelph, led a recent study to assess the effect of alternative feeding strategies on broiler breeder pullets.

Feeding young broiler breeders around the world generally involves restriction starting when the chicks are one week or a few weeks of age. This is done so that they grow at a rate that supports their health and welfare – one that prevents obesity, lameness and reproductive problems.

In North America, feed restriction is managed either through daily feed restriction or skip-day feeding schedules, where chicks receive no feed on one or more non-consecutive days per week and receive a greater quantity of feed on the remaining days.

“Methods of skip-day feeding vary from farm-to-farm across Canada, but it is a practice many of our producers are familiar with or have employed,” notes Jack Greydanus, chair of Canadian Hatching Egg Producers (CHEP). “In general, skip-day feeding typically begins at about three weeks, and the days skipped are reduced as birds approach the laying period. By 22 weeks, every-day feeding is more typical.”

There are some welfare concerns with both types of feed restriction. Limiting feed on a daily basis means that while birds still get enough food for their growth, they can exhibit signs of chronic hunger. Not being fed to satiety can also cause stress and injury due to the competition for food (pecking) it promotes.

That some chicks outcompete others for food also can mean weights in the flock are not uniform.

Skip-day feeding can cause stress as well, from hunger on off-feed days and also from the birds not knowing when their next meal is coming. As far as CHEP members’ use of skip-feeding, Greydanus notes that, as an organization, CHEP works closely with animal welfare experts, and that skip-day feeding is a practice that is acceptable under Canada’s voluntary National Farm Animal Care Code of Practice.

“That said, as an industry we are always looking for ways to improve and update our practices,” he notes. “Welfare is a main research priority for CHEP. We are funding research by Dr. Stephanie Torrey at the University of Guelph on alternative feeding strategies for broiler breeders.”

Torrey suggested consulting Aitor Arrazola, a PhD candidate in the university’s Department of Animal Behaviour & Welfare under her supervision. Arrazola led a recent two-year study to assess the effect of alternative feeding strategies on broiler breeder pullets and he also analyzed some long-term effects of these strategies after the pullets had grown into laying hens.

Arrazola notes that while some positive effects of alternative diets have been reported under lab trials in the past, there has been no conclusive findings by the scientific community relating to advantages in commercial production settings.

Arrazola found that pullets given skip-day feeding showed reduced feeding motivation compared to pullets given daily feeding during early rearing. However, compared to pullets on a graduated feeding schedule (which involved daily feeding at the end of rearing), pullets on a 4/3 schedule (Three days fasting within four days feeding) were highly motivated to forage and to eat feathers after feeding time. Arrazola says his measurements of physiological indicators suggest that broiler breeders can habituate to their feeding frequency, especially if the schedule is more predictable (e.g., a 4/3 schedule compared to the 5/2 schedule – two days fasting within five days feeding).

However, hens that received skip-day feeding lay settable eggs with a relative heavier yolk than hens reared on daily fed treatments, and hens reared on the 4/3 schedule had the fastest feed intake and the highest compensatory feeding at the end of lay, combined with a better body weight uniformity. Furthermore, Arrazola says “there were fewer males hatched from eggs laid by older broiler breeder hens reared on [skip-day] schedules.”

European research
A recent study by Dr. Caroline Lindholm and colleagues at Linköping University in Sweden was recently published in the journal, Poultry Science. The team compared birds raised on a 5/2 skip-day schedule to birds raised on daily feed restriction. They found signs of increased physiological stress levels in the skip-day birds, and that the birds showed no signs of learning the feeding schedule. The researchers believe this unpredictability is a stress factor.

At the same time, 5/2 skip-day birds showed signs of lower anxiety before feeding times, which may be a result of the lower feed competition associated with larger portion sizes. (That is, the birds seem to understand that they will each be getting a large meal and are not stressed about having to compete for it.) The 5/2 skip-day birds also generally showed more interest in a novel object in the home pen, which indicated increased risk taking and reduced fear while fasting.

“Taken together, the effects of 5/2 feeding versus daily feed restriction on the welfare of broiler breeder pullets remain inconclusive,” states Lindholm, “and differ between feeding and fasting days. In addition to reducing stress by minimizing the number of fasting days, we suggest that a shift to more predictable schedules may help improve the welfare of broiler breeder pullets.” Based on this study, which did not include 4/3 skip-day feeding schedules, they conclude, “Restricted feeding of broiler breeders is required for improved long-term health and welfare.”

In terms of what recommendations Arrazola would like to communicate from his research, he notes that, in terms of improving body weight uniformity, rearing practices such as grading, increasing feeder space and using a pellet or crumble diet rather than mash seem more promising than pursuing skip-day feeding schedules.

The researcher advises that if producers use skip-day feeding, they might “consider providing non-nutritive ingredients during off-feed days – for example, rolled wheat in an alternative feeder.” Arrazola adds that because broiler breeders are highly motivated to forage independently of what feeding day they are in during a skip-day schedule (especially those raised on the 4/3 schedule), providing bedding material and scratching areas could reduce further behavioural problems such as feather pecking, aggressive (severe or injurious) pecking and drinker pecking.

“Environmental enrichment can help to redirect oral behaviours toward objects instead of feather pecking,” he adds. “I recommend producers check for feather coverage, prevalence of skin lesions and litter quality on a regular basis.”

Greydanus says producers in Canada use a variety of skip-day feeding schedules. Indeed, some will use (throughout each pullet cycle) daily feeding for the first week or weeks, then 4/3, then 5/2, then 6/1, finishing with every-day feeding.

Greydanus does not provide non-nutritive ingredients during off-feed days to his poults, nor provide them with enrichment objects in order to reduce pecking. To his knowledge, no other CHEP members use them, but he and others use dimmed lights and other methods to reduce pecking.

However, Greydanus believes that non-nutritive ingredients during off-feed days and permanent enrichment objects may be employed by CHEP members to their poults in the future, as feather pecking is getting more prevalent. “It didn’t happen in years past, but has only started in the last two to three years,” he notes, “which makes me and others believe it’s related to new genetics. We are always responding to genetics changes.”