Cindy Egg Farmerette: A look back and forging ahead 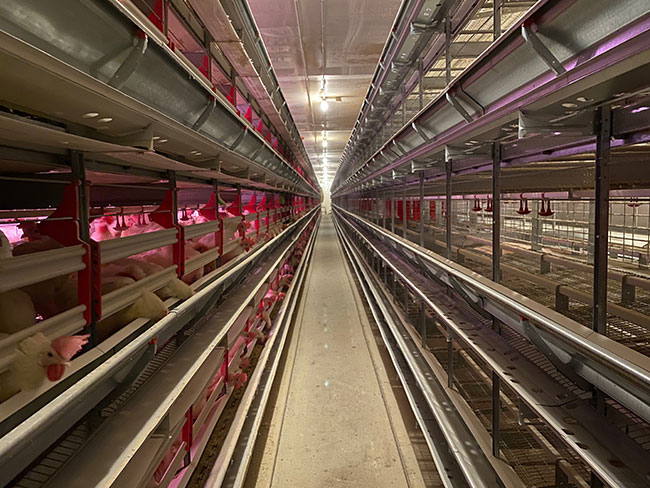 After Construction: For the sake of consistency, we installed another row of Farmer Automatic Eco II enriched colony housing (pictured above on the right) before it was discontinued. PHOTO CREDIT: Cindy Huitema

Some of you might remember me from a few years ago. That’s when I, Cindy Egg Farmerette, wrote about our egg farming journey as our family built a new enriched colony barn.

First, a short recap. We began the physical building in September 2017, with birds being housed in May 2018. We put in three rows of housing, four levels high and 15 houses long. The capacity for these rows is 12,960.

At the time of ordering our initial housing, we opted to go four levels high, with three rows, but leaving the space in the barn for a fourth row.

We originally thought we would do four rows and go three high, with the plan to add the top tier in the future. But we realized that this would be a lot of work. (This farmerette compared it to constructing a bungalow and adding a second floor later – a lot of extra time and labour and possible production downtime.)

Planning a fourth row
In October 2019, we met with knowledgeable salesman Harold Meadows of Clark Ag Systems at our kitchen table. The Farmer Automatic Eco II enriched colony housing that we had in our barn was being discontinued and upgraded and we wanted to order our fourth row of equipment to match the system we already had in place in the henhouse while we still could.

My husband Nick was general contractor and manager for the original build and proved to me that he can be quite particular about how things are done and appear. For example, the electrical conduit pipes were not to have any of the lettering showing when mounted to the walls and ceiling. This attention to detail still surprises me, as he makes more work for me in the house (fellow farmerettes know what I’m talking about!).

Nick wanted our housing rows to match. Harold was our salesman when we made the initial purchase and aided us immensely along the way – especially with the Genius technology after the first flock was housed.

In February 2020, the housing parts came by truck on skids and we stored them in our old hay barn until we were ready to begin construction. At least we had the equipment on site and split the equipment cost over two calendar years for accounting purposes.

Our flock changeover month is May. We arranged to have Chris Best Construction come and pour a two-inch depth pad for the new row in May 2019. Chris did our original concrete work in the barn and was, thus, familiar with the facility already. The pad is two inches in the middle with slight, gradual slopes to the aisle edges. We find that this makes it easier to clean under the housing throughout the year and at the yearly barn cleanout time.

Preparing “the warehouse”
Our plan was to try to begin this project in 2020. However, our first step was deconstructing the equipment in our old layer barn so that we could use this space for storage and as a workshop for the new install.

We also saved any equipment that we could sell as used parts – sorting the various components into recyclable matter, reusable parts, if any, metal for taking to our local scrap dealer and garbage.

In March 2020, we had brothers Nick and Ben help my husband Nick and son John take apart the housing before the brothers returned to school. The initial stages of the pandemic were just taking place and even at this time we exercised caution, with the brothers working in one area of the barn and Nick and John in another.

The plan for the old barn was to use it as a warehouse and workshop for spreading out all of the housing parts and having work stations. Our son John was quite insistent that we no longer call this the old chicken barn and refer to it, instead, as “the warehouse”!

Our old barn (sorry, warehouse!) is directly beside and parallel to the new barn, with a rear exit door right across from a side door in the new barn for taking housing pieces over when ready for installation.

I was quite skeptical that we could complete the dismantling and cleanout in one week. However, we completed the job in less than five days with a truck trailer collecting scrap metal to be cashed in when the scrap metal price improved.

Nick and John moved the many skids into the empty warehouse in the summer of 2020 when the weather was more pleasant. It was surprising how much space this building had after the old housing was removed. 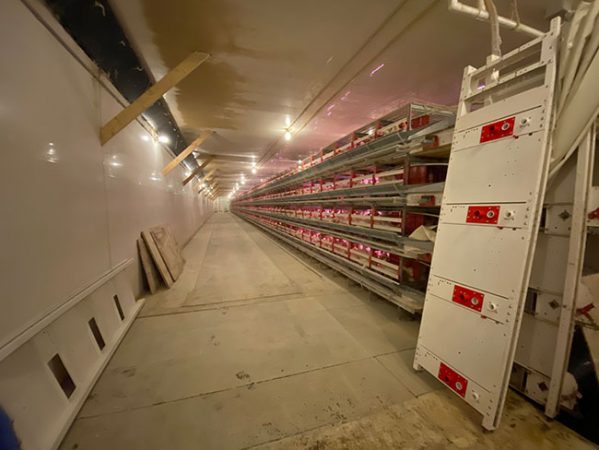 Before Construction: When we built our enriched barn a few years ago, we left room for a fourth row to accommodate expansion.

Construction starts
In early January 2021, we again had brothers Nick and Ben help. The main frames were the first items we constructed. We set up socially distanced work stations and established an assembly line for the frames. Our colony enriched layer barn is 15 houses long, and they needed to make 76 frames consisting of more than 20 pieces.

We marked out the floor in the new barn. Our daughter Charlotte and I were helpful carrying parts to the barn when needed and we assisted with taking the frames from the warehouse to the new barn as well.

We were concerned about how our activity in the barn would affect the behaviour and production of the hens with the construction noises, people walking in and out of the barn more often, ceiling lights on and working across from the existing rows. However, the hens got used to louder noises within a day and egg productivity never changed.

Nick liked that he had an exact replica right beside him and John proved again to be very detail-oriented in the various construction components, with a good memory of the previous build.

We erected the rear manure end assembly first, with the frames being the next big component. The various parts fell into place like building a Lego playset. Clark Ag Systems was also of great assistance when we had a construction question or were in need of any missing parts.

Charlotte and I also constructed the doors – 600 in total that included four pieces each! We did this on days when the weather was not as cold and we could fit it in around our other work. Charlotte has been barn manager and packs the eggs since the new barn has been in use.

Another job that took a lot of time and figuring was adding more length on the egg conveyor at the front of the barn and the conveyor paddles and elevators at the front of the new row. I helped John by putting the paddles together and placing them on the elevator chain for him to hand rivet in place.

Even though we felt we had a lot of time, the arrival of the new birds still was a challenging deadline to meet, with some more work being done on the system in the week prior to the birds’ arrival.

The timing and conveyor system had to be tweaked and greased to work properly for egg gathering once the birds were in.

Each house now has 27 or 28 birds each, with a capacity of 36. They have lots of space and we have lots of room for future expansion.

We completed this project in its entirety during the wretched COVID-19 pandemic. Although some parts were delayed in getting to us, they eventually arrived. The pandemic restrictions caused minimal interruptions and there were no visitors to the farm to take time away from our work time. 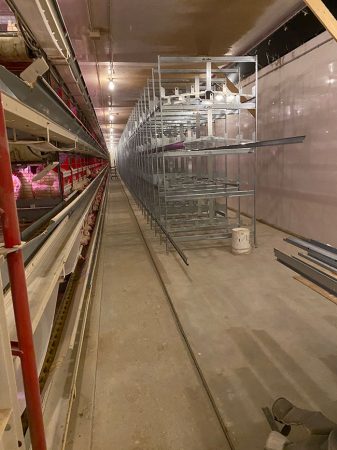 During Construction: Our colony enriched layer barn is 15 houses long, and we needed to make 76 frames consisting of more than 20 pieces.

Some helpful tips
Some advice from our experience with this and the earlier build is, firstly, to make sure to leave room for expansion in your egg production facility.

Secondly, we find the in-house lighting very valuable and a great aid in conducting our animal care barn checks every day. The hens do appear to be happy in this environment and are easy for us to see as well.

Lastly, seek out assistance from the company that sold you the product. You are spending a lot of money for a long-term investment and need to do things right to prevent extra cost, time and possibly production losses in the future.

Looking forward
As a side note, we were approached by Burnbrae Farms, the company we sell our eggs to, to produced omega-3 white eggs from our hens housed in colony enriched housing.

We began this process in August and will produce omega-3 until November. Although this has basically been a change in feed diet, it has added some excitement to our usual routine.

Our egg farm life continues on and we are happy with what we accomplished. Additionally, we had the anticipation of our first grandchild to look forward to during the row four build, which provided us with a nice distraction at times. Our daughter Stephanie works for Clark Ag Systems and she and Jake became first time parents to Moira Elisabeth on May 19.

Now, Cindy Egg Farmerette has updated you on the happenings at our farm and I look forward to informing you on what our next endeavour brings in the future!

Cindy Huitema is an egg farmer from Haldimand County, Ont., who occasionally writes about her farm’s journey transitioning from conventional hen housing to an enriched system.