A Market for Animal Welfare 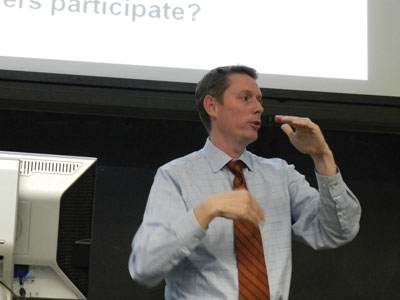 Supply and demand. Economies of scale. It’s basic “Ham and Egg-onomics,” according to Jayson Lusk, an agricultural economist at Oklahoma State University.

Speaking to an audience at the 2012 F.W. Presant Memorial Lecture at the University of Guelph, Lusk proposed a market system for buying animal welfare, whereby consumers could purchase animal well-being units, similar to carbon credits.

Such a trading system could offer a way for consumers to encourage improvements in animal welfare by paying producers for their efforts.

Developing a market for buying animal welfare is one way to deal with an issue – a solution only an economist could think up, admits Lusk. But if you think about it, it can make sense.

Books from 1910 talk about using cages and applying factory concepts of efficiency to raising animals, but it is only through the evolution of technology that producers have been able to specialize and gain economies of scale.

“Farmers aren’t more greedy than 100 years ago,” says Lusk, “people are people.” The market is driven by consumer demand. It’s basic economics, not “evil agri-business” as the animal advocacy movement would like you to believe.

What we have now is higher production than ever before and consumers paying lower prices. We’re getting more for less, so what’s the problem? asks Lusk.

Have these benefits come at the expense of animal welfare? This concern has now become a major driver in animal agriculture, but what are the solutions?

Bans to certain production practices are blunt instruments that focus on an input, not an output, says Lusk. For example, poultry welfare in an aviary system can be worse than in a cage system. A ban is a solution that is expected to fit all, no matter how cold or hot it is where you live. Also, if you only ban something in one jurisdiction, retailers will just buy product from elsewhere. A ban can only work to change animal welfare if a trade barrier accompanies that ban.

In the United States, Lusk says, bans have been mechanisms of change, however, with initiatives placed on state ballots that have been successful. But some states don’t allow ballot initiatives, which means that bans become law in states where the political climate is most favourable, not necessarily where the most animals are produced, which does not provide an overall solution to animal welfare issues.

In many cases, consumers demand better conditions for the animals but are not willing to pay for an increased cost of production. That puts the producer in a pickle, says Lusk. “Consumers aren’t always consistent,” he acknowledges. In California, for example, 63 per cent of consumers voted for a layer cage ban but only five per cent are willing to pay the premium for cage-free eggs. When they are standing in front of the egg shelf at the grocery store, many simply buy the cheapest eggs, believing that others will pay the price.

Labels claiming higher standards of production are a low-cost solution but they can become confusing to the consumer (for example, what does “natural” really mean?). Meat taxes proposed by some animal activist groups such as PETA are not particularly desirable either. Meat demand is inelastic, says Lusk. Therefore, it would take a huge tax to change consumption, and the tax wouldn’t necessarily improve animal welfare.

What Lusk proposes is a system that will be consumer driven: if animal welfare were a purchasable commodity, then consumers could buy credits to support the improvement of animal welfare. In essence, consumers would be paying the farmer to do a better job.

Lusk proposes purchasing animal well-being units (AWBU) as a mechanism to buy animal welfare. Placing a score on certain production systems, such as feeding level, space provided and nesting arrangements for poultry, for example, would provide a measuring stick for an AWBU, resulting in an aggregate score for that farm. Payment for the AWBU could then provide compensation to the farmer for the extra effort.

Is Lusk on to a good idea? Ian Duncan, animal and poultry science professor emeritus at the University of Guelph, likes the idea of a separate “welfare index” for each animal product that could be traded or offset, similar to carbon credits.

However, he says, the problem would be setting up the welfare index.

After raising this issue during the question period, he further explained after the lecture that welfare would be much harder to measure than carbon: it’s complicated.

As Duncan pointed out, welfare is affected by all of the above factors. As a result, animal welfare credits are, “a nice idea in theory but it is really difficult to balance some of these things against each other.”

Duncan’s behavioural research has focused on “asking the animal” what it feels about the conditions under which it is kept and the procedures to which it is subjected.

Using broiler breeders as an example, he explained that these birds are kept extremely food restricted, and normally only allowed 35 to 40 per cent of the food they would eat if given a free choice. How do the birds feel about this?

Duncan says they tell us that they are hungry by working extremely hard to get food. However, if we give them as much food as they want, they become obese, their production of fertile eggs drops dramatically, and soon they begin to suffer from all the diseases of obesity and they feel awful, Duncan explained.

Coming back to the concept of Animal Well-Being Units, would people be willing to buy animal welfare? Lusk asked. For those who feel strongly about animal welfare but have already changed their diet to reflect their preferences, buying welfare credits is an option that could appease their need to support animal welfare: they can’t not buy eggs anymore if they’re already not buying eggs. Agribusiness, animal welfare groups, you and me, we could all buy AWBUs and producers could participate and make money for doing so.

“The current market price for animal welfare is zero,” says Lusk. “Therefore not many farmers are going to sell it.”

From this economist’s perspective, we’ve just got the price wrong.