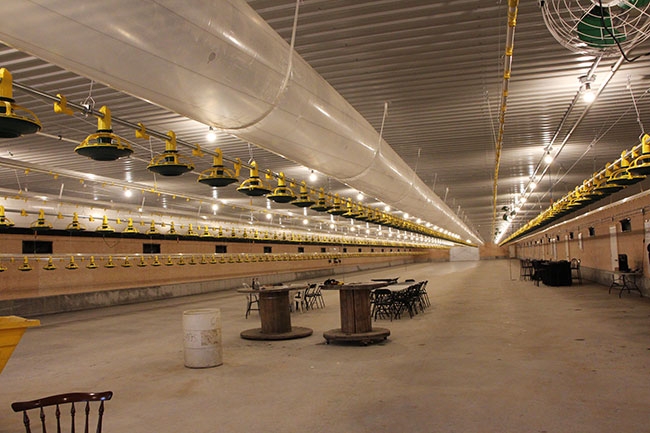 “I grew up on a farm, with my grandfather starting with dairy and then cash crops and some pork and beef, and always wanted to get into farming,” Pryce says. “I worked towards this through starting up a few different businesses like road dust control, a rental business, vehicle undercoating, and then decided last summer to take the plunge to buy quota and build a barn.”

Construction started in September 2016 and finished in December 2016.

“Our sons, Russell and Clinton, are the reason Catherine and I did it, so that they can have a future in farming if they want it,” Pryce adds. “We’re starting with the goal of producing 2.2 kilogram birds, with four kilograms as the ultimate goal.”

Pryce chose a cross-ventilation barn design with a heating system that’s brand new to North America – one he’s seen working well in other barns he’s visited. Pryce also believes it will help save on heating bills and electricity, which is quite costly in Ontario, and provide excellent humidity control.

Weeden Environments was a main contractor for the project. Nathan Conley, the firm’s manager for Ontario and the northern United States, says the cross-ventilation design offers a lower building cost than longer and narrower tunnel barns. “Many of Brent’s neighbours and friends are very happy with their cross-ventilated buildings,” he says. “We recommended that two sides have modular side wall air inlets for consistent control over incoming air during minimum ventilation. The air from both sides travels up and along the ceiling [the warmest part of the barn] and therefore it’s conditioned before it reaches the birds and the litter. We then use stir fans to produce consistent temperatures throughout.”

Conley says when warmer weather arrives, a continuous double baffle inlet on one side of the barn will be employed; this set-up creates the same amount of wind chill over the birds as continuous baffle on both sides of the barn. Val-Co HyperMax exhaust fans were chosen for the barn, which Conley says are high-performing and very energy efficient.

A first in North America, the barn’s forced air propane heating and humidity control system is provided by Mabre. Mike Neutel, CEO of Neu Air Systems in Woodstock, Ont., says the systems are used all over the world. The set-up includes two 600,000 Btu Mabre propane furnaces with Reillo burners.

“In poultry barns, typical heating systems are tube heaters and box forced air heaters,” Neutel says. “Some growers have these heaters vented to the outdoors and some vent the products of combustion in the barn.”

Mabre heating systems exit exhaust through chimneys while maintaining a high efficiency of 92 per cent, Neutel notes, while the forced air blowers provide excellent air circulation, which is key in maintaining proper humidity levels. A very even temperature, often within a degree throughout the entire barn, is achieved, but no draft is created. Return air going back to the furnace incorporates fresh outside air through a louver, while heating and mixing this air through an exchanger.

All of this, Neutel says, was important to Pryce. “[He] also commented during his decision process that the low ammonia levels will make it a safe environment for his children to manage the barn when they get older without having to worry about farmer lung,” Neutel adds. Mabre systems maintain humidity between 50 and 60 per cent, even with outside humidity levels of 90 per cent, which Neutel says keeps ammonia levels very low.

In terms of how popular the cross-ventilation systems will become, Conley notes that in Ontario, producers are moving away from two and three-story barns for easier cleaning and to incorporate modular loading systems. “In the U.S., longer tunnel-ventilated barns are the norm, because the barns are larger and the temperatures higher,” he explains. “With this design – used there and around the world – the barn operates the same as a cross-ventilated barn, where air is brought in via sidewall inlets and exhausted out the sidewalls, but when hotter weather arrives, we gradually transition into tunnel to generate air speed down the length of the barn to create wind chill over the birds to cool them. I think that you’ll begin to see a trend of tunnel-ventilated buildings popping up over the next few years as we continue to see hotter, longer summers and the need to control heat stress becomes greater.”

In late January, Pryce reported in on barn performance and his first flock, which had arrived three weeks prior. “So far, I’m really happy with the heat unit and the environment in there is great. Right now is when you see things start to slide a bit, but it’s the same as the first few days the chickens came in. Usually you don’t really take young kids in a barn, but I’m pretty comfortable with taking my young kids in. The carbon dioxide and humidity levels are bang on.”