EFO Chair Carolynne Griffith retires after 17 years with the organization 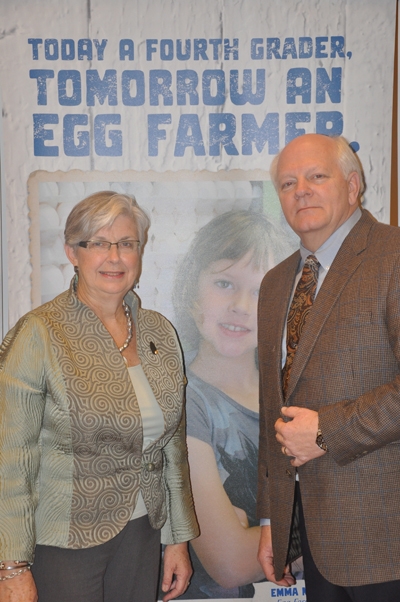 Carolynne Griffith (shown here with EFO general manager Harry Pellisero) said her tenure on the EFO board has “been a great, fulfilling and rewarding journey.”

In her last speech as chair of the Egg Farmers of Ontario (EFO), Carolynne Griffith said, “I am proud to be an egg farmer of Ontario.”

After a decade at the helm of the organization and 17 years on the board of directors Griffith commented, “It’s been a great, fulfilling and rewarding journey.”

Deciding to leave the board was not easy. But it was time. It is, she said: “A day of sweet sorrow for me.”

She thanked Ontario’s egg farmers, the EFO staff and the EFO board of directors for their help and support. “Thank you for the many opportunities you have afforded me.”

She also made special mention of her late husband Arthur, who encouraged her first to run for the board and then supported her through her years as a director and chair.

Griffith, an egg farmer from Alviston, Ont., first joined the board in 1995 and has held the position of chair since 2002.

During her tenure she said there were many challenges, not the least of which are the ongoing talks at the WTO. Griffith took on the protection of supply management as both a professional and personal challenge. A friend said, jokingly, that in recent years Griffith had been to meetings of the WTO in Geneva so often that she likely knows the streets of Geneva as well as she knows the streets of her hometown of Petrolia, Ont.

Griffith said that the struggle to preserve supply management is not over. While both the prime minister and the federal agriculture minister have been unwavering in their support, supply management continues to be under attack at the WTO and in the press.

While the threat from the WTO appears to have receded in recent months she cautioned that the trade talks are only “in hibernation, but not dead” and could reawaken after the U.S. elections and after Europe deals with its economic crisis.
In the past year, supply management was under near constant attack from some journalists who have made it “their life’s work to tear down what we have built over the last 40 years.”

Those critics are not going to go away so egg farmers and others in the supply-managed sector must remain vigilant and remain ready to counter the assertions. One way to deal with the critics is to connect directly with consumers. For consumers to trust you they must know you and that is at the heart of EFO’s award-winning “Who Made Your Eggs Today?” campaign.

Introducing the public to egg farmers builds a connection. It brings human faces to the forefront and makes eggs more than just a commodity. “This has been one of the most memorable achievements during my tenure,” she said.

“We have a great story to tell and only we, because of our experience, can tell it,” she said.

Egg farmers now connect with consumers at a personal level and they are doing it in ways that even 15 years ago couldn’t have been imagined, she noted. When she first joined the board no one had a cellphone and few if any of the directors even had a fax machine. Today cellphones, smartphones and more are essential tools, and not just for communicating with each other. The EFO carries out its campaigns across a host of different platforms including social networks, Twitter, e-mail, its website as well as the more traditional television, newspaper and magazine ads.

Griffith said an egg farmer’s goal is to produce the best eggs for consumers, and consumers should be told that in a way that connects them to the producer and that assures them egg farmers and consumers have shared values. The “Who Made Your Eggs Today?” campaign is doing just that.

The EFO thanked Griffith for her years of service by presenting her with a painting of one of the favourite spots she shared with Arthur and erecting a “Thank you, Carolynne” billboard in Petrolia.