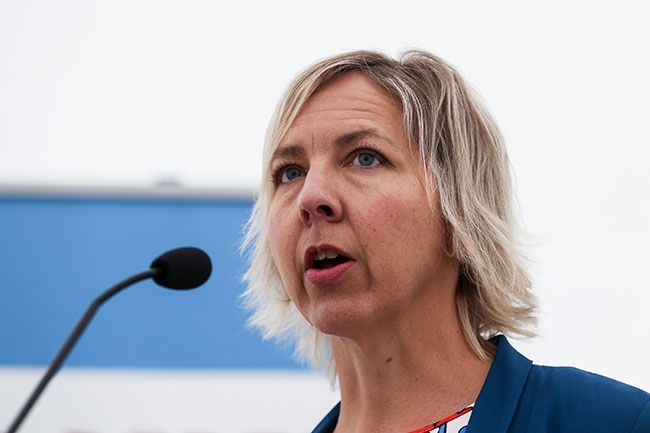 Sandilands believes that in the future, there will be an interesting tension between the pressure retailers are bringing to bear on the U.K. poultry industry and the need to champion research evidence so that science gains more power to influence consumers. Photos courtesy British Free Range Egg Producer’s Association

Housing and managing poultry in ways that are sensitive to the birds’ needs while respecting the sustainability of farming in the United Kingdom is the focus of Dr. Victoria Sandilands work. Sandilands is a senior behaviour and welfare scientist at the Monogastric Science Research Centre at Scotland’s Rural College.

Sandilands recently spoke at the University of Guelph’s Campbell Centre for the Study of Animal Welfare in Guelph, Ont., as part of the centre’s ongoing animal behaviour and welfare seminar series. Her research on poultry welfare is wide-ranging, from examining conditions in furnished cages to the humane killing of birds on farms on small and large scales. She teaches and supervises students on a variety of topics, and serves as current president of the World’s Poultry Science Association (U.K. Branch). She is also an active member of the International Society for Applied Ethology.

“Increasingly, my work involves collaboration with well-known poultry companies, animal welfare organizations and industry councils,” she says. “The poultry industry is a relatively intimate group of people, and I like to think we are working towards similar goals in many instances. We need to work towards practices that result in better animal welfare, but we have to support the sustainability of farming as well.”

Sandilands was always interested in animals, but decided against the veterinary path. During her undergrad degree in California, when she briefly studied northern elephant seals, she got hooked for life on animal behaviour. “I had a choice between a master’s program in wild animal or farm animal behaviour, and decided on farm animals,” she explains. “My PhD was in laying hens because, from a practical point of view, they are easy to study. I still wasn’t sure at that point about studying poultry further, but I discovered the more you study chickens, the more you realize you don’t know. There is so much to learn. If you do any research project, you are only addressing one small aspect, and a few research projects don’t necessarily give you a definitive answer.”

For example, her beak trimming research is ongoing. According to Sandilands, the U.K. had allowed the infrared method, but was looking to ban all trimming by 2016. Sandilands was part of a “Beak Trim Action Group” made up of scientists, vets and many industry and government officials, and her studies – along with those of other researchers – convinced the group that the U.K. was not yet ready to ban beak trimming. Sandilands noted that even in large free-range flocks, substantial feather pecking can occur with untrimmed birds, and research continues into how pecking can be reduced beyond trimming.

During her talk at the University of Guelph, Sandilands gave an overview of how egg production in the U.K. has developed – within a relatively very short period – from backyard flocks to large commercial operations, and from one type of chicken to two distinct lines: broilers and layers. “In the 1950s in the U.K., we had 80 per cent of egg production in small free-range flocks, 12 per cent in barns and eight per cent in cages,” she explained. “By the 1980s, we had 95 per cent of layers in cages, four per cent in barns and one per cent free range. When battery cages first came out, they were for holding individual birds so that farmers could identify and cull the layers that did not perform well. In 2015, the U.K. now has about 51 per cent of layers housed in cages, 2.5 [per cent] in barns, 44 [per cent] in free-range production and 1.5 [per cent] in organic production. So the way hens are housed varies widely from decade to decade.”

Cages are disappearing in North America and Europe due to public pressure and new research results, but a new element has been added recently, with major supermarkets and restaurants wanting only cage-free eggs by 2025. “The supermarkets think they’re doing the right thing, but nothing with housing systems is black and white,” Sandilands said. “No system is better than any other on all factors. We have a situation where we might not have a market for caged eggs in future, but it’s also worrying for free-range producers here because when there are only free-range and barn eggs, the free-range farmers’ premium margin will be smaller.”

Sandilands and colleagues from various organizations have made some presentations and held friendly debates over the fact that housing systems aren’t clear cut in terms of animal welfare and to set out the pros and cons of each option, but it’s difficult to reach large numbers of people this way. “In addition, it’s really hard to convince people that furnished cages for example, have some real benefits, as it’s the behavioural aspect of a hen’s life that captures people so much,” she explains. “The fact that birds can’t behave normally in a cage, can’t dust bathe and forage, is more important to people than air quality and other factors. People have a picture in their minds of cage-free life for a hen, and don’t understand the scale of free-range or barn production and what it means for a hen to live in these cage-free systems with thousands of other hens. But if you’re trying to feed several million people eggs on a daily basis, it’s going to be large-scale.”

Sandilands believes that in the future, there will be an interesting tension between the pressure retailers are bringing to bear on the U.K. poultry industry and the need to champion research evidence so that science gains more power to influence consumers.

RESEARCH INFLUENCE
Sandilands’ research continues to shed light on bird welfare. For example, broiler-breeders (who are restricted feed) were thought to be hungry based on their behaviour, so some research has focused on how to use fibre and appetite suppressants to make birds feel satiated while still maintaining a healthy growth curve. But new studies by Sandilands and other scientists have shown birds who spend more time eating have stress hormone levels and overall behaviours similar to birds fed restricted diets.

Other studies by Sandilands and her colleagues are investigating methods for necessary culling of small numbers of birds on-farm in terms of welfare, ease of use, cost, etc. That research has found various humane tools are no quicker than traditional hand wringing and that hand wringing can be improved with better techniques. She also notes it’s very satisfying to see her research into more humane on-farm euthanasia of larger numbers of birds using mixtures of argon and carbon dioxide in the case of disease outbreak being implemented by at least one company in the U.K.

Sandilands is particularly excited about establishing an objective way to measure chronic stress in laying hens. Stressed hens show less brain neuron formation. Once the method of measuring this is completely established, the industry will have a solid way to compare chronic stress levels of hens housed in various systems.

Going forward, Sandilands believes there will be an interesting tension between the pressure retailers are bringing to bear on the U.K. poultry industry and the need to champion research evidence so that science gains more power to influence consumers.

“In the end, things have a way of working out,” she concluded. “Many bird welfare topics are not pleasant, and we have a responsibility to look at these things, but I come from a practical perspective as well. If I had 10 chickens, I would not keep them in a furnished cage, for example, but we have hundreds of thousands of birds and the need to feed our population with high-quality eggs, so how do we house hens in a way that recognizes welfare but allows farmers to still make a living? I’m glad the battery cages have disappeared in Europe and are disappearing in North America, but we can’t push for changes that destroy agriculture or run it down.”