A Window into the Future 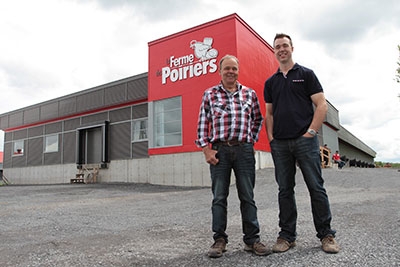 Mathieu Poirier (right, shown here with his father Jean-Claude) felt it was time to modernize the family business

It had been ten years since Mathieu Poirier had joined his father Jean-Claude on the farm, and he felt it was time to modernize the family business. Egg production in the next 30 years is certainly going to be very different from the past 30 years. At 33 years of age, Poirier prefers to be ahead of upcoming trends.

Built over last winter, the new layer barn is entirely equipped with enriched battery cages. But Poirier did not only want to be prepared for future animal welfare regulation. He built his barn with another goal on his mind: keeping consumers on the side of local egg farmers.

Located just outside the village of Saint-Bonaventure, near Drummondville, the new building uses contrasting red and grey siding to create a contemporary look on the outside. Poirier chose the colours, drafted a plan and took it to an architecture technician.

“I wanted something nice,” he says. “I wanted the result to be different (from other farms) and it wasn’t much more expensive.’’

It was also the right time to have a graphic design firm create a new logo for La Ferme des Poiriers.

The visual impact is not only meant to stand out among other poultry operations. Poirier wants to make a good impression when visitors drop by to see how eggs are produced. The hen house has a large window that offers a peek into the birds’ living environment.

The window is located at the end of a hallway. Visitors can have a look without having to go through biosecurity, since they don’t enter very far into the building.

‘’This window for visitors is like a treat for us,’’ Poirier says. ‘’People want to know how egg production works. Kids want to see the birds. With my new enriched cages, I am not at all ashamed of showing how the birds are treated.’’

300 feet, 6 tiers
Built in the 1970s, the two older layer barns had become too small and out-dated. Quota from growth allocations had to be rented out and if it was not brought back to the farm, the Poiriers would eventually be forced to sell it or give it up. The farm was also losing its two most loyal employees. In a new construction, everything would be simpler for future workers.

The new construction houses six 300-feet rows of cages, six tiers high, with a walkway between tiers three and four. To allow for two age groups at the same time, the barn is split in two, each side with three rows of cages, for a total capacity of 62 000 layers.

The enriched cages are Hellmann’s model EU 24-241. They have a middle partition that splits cages in two sections, each holding a maximum of 24 birds. ‘’Research shows that when you have more than 30 or 40 birds in cage, they start picking at each other. That’s why we have middle partitions,’’ says Johann Benner, who oversees Canadian sales at Germany’s Hellmann Poultry.

Cages have two parallel perches, high just enough for eggs to roll under them. They also boast curtains around a nesting area located close to the front, to minimize egg movement.

Feeding troughs follow the whole length of the cages in front. They are rigid enough to be used as a ladder. These sturdy troughs are standard at Hellmann, Benner says.

A supplementary feeding system may be added along the central partition. ‘’If one day regulation changes and we need to add trough space, it will be possible,’’ says Stéphane Chouinard, Hellmann distributor for Quebec and Eastern Ontario.

The barn is ventilated with an air mixer, providing 25 cfm of fresh air directly to the birds in their cages and bringing manure water content down to 35 or 40 per cent. Air may also come from lateral air intakes in the summer, or be filtered and recirculated in the winter.

The facility also has a new water treatement system that will greatly improve water quality from the older now-demolished houses.

Hot water heating pipes were inserted in the cement floor, but only under the alleys between the cage rows. ‘’We wanted to reduce our construction cost, because we didn’t know if heating was needed,’’ Poirier said. He expects to heat during cold waves, in order to reduce feed costs.

Two different meals
The Poiriers also grow 100 acres of corn and soybeans, which provide for 20 to 25 per cent of the birds’ feeding needs. The feed is mixed on location, with advice from Shur-Gain experts.

The new barn has four feed silos: two for each layer age group. They will be used to introduce Shur-Gain’s Ecolay Tandem, a new program that provides layers with two different feeds, one for the morning and one for the afternoon. Recipes vary according to the needs of the birds’ metabolism during the day.

Construction at La Ferme des Poiriers is not yet over. For more than 30 years, the family has raised its own pullets. The old barn currently housing the pullets is not convenient to raise two age groups, to go along the new layer barn. Before the end of the year, pullets will also have a brand new home.