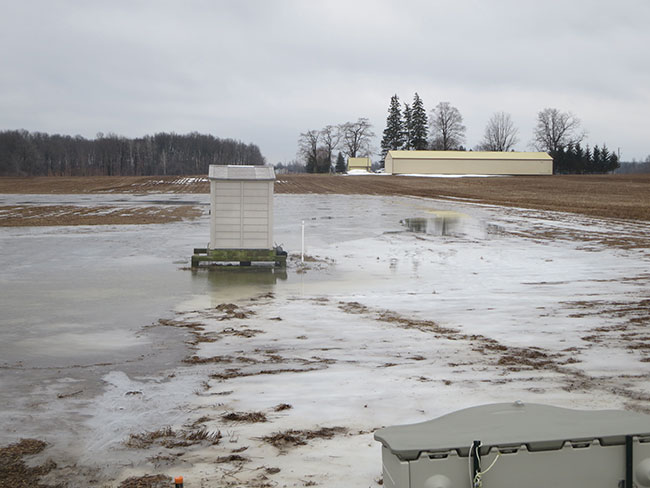 This photo shows surface flooding of fields during a snowmelt. The runoff and water quality monitoring station and shed can be seen in the background. PHOTO CREDIT: Ryan Carlow.

Ontario’s phosphorus losses are happening mainly over the fall and winter and primarily during and after major rainfall or melting events.

That’s according to Merrin Macrae, a University of Waterloo professor in geography and environmental management, who has spent the past decade studying how climate and soil management influence water quality patterns in Ontario.

Most of the phosphorus losses happen between October and April, which makes staying away from practices like winter spreading absolutely critical.

“This doesn’t mean that large losses can’t happen in the summer, but the peak time is typically during the non-growing season with snow melt or with big spring storms on wet soils,” she says. “We can’t control the climate, but we can control what we do before and during those vulnerable periods.”

Peak flow events
Nutrients applied in the fall and winter will be subject to at least a couple if not more of what are called peak flow events – snow melt or winter rain events that cause heavy water flow across the soil surface – which means the nutrients will be washed away before the soil can absorb and use them.

Research shows that about 90 per cent of phosphorus losses happen in two to five big events in late winter or early spring, as opposed to chronic loss that happens year-round.

“Really big rains or winter thaws can be critical events and they’re really bad if they’re coupled with recent fertilizer application – it’s like turning on the tap,” she explains. “You can’t predict a three-inch thunderstorm in June but you can predict a snow melt in late February or early March.”

According to climate records and weather simulation models, big soaker events are going to happen more frequently, which means more peak flow events – and could result in more phosphorus losses in the future unless preventative steps are taken.

By spreading the manure in the spring at planting time, the nutrients are more likely to stay where the crops are able to use them. Similarly, applying in September when winter wheat or a cover crop is planted is also a good time.

An egg producer’s experience
Nick Stokman is an egg producer just northwest of Strathroy. His current barn was converted to a dry manure system from semi-liquid during its last renovation. That’s also when his 40-foot by 60-foot dry manure storage with interior travelling feeder was built, which dramatically expanded his manure storage capacity from the previous open liquid manure pit.

In fact, it was during the very wet fall of 2018 when he was unable to spread any of his manure after wheat harvest the way he normally does that he decided to store it until spring to avoid compacting the soil.

He’d come up with a back up plan to store any excess in a neighbour’s unused bunk silo but ended up not needing it. Instead, the manure was dry enough that he ended up being able to store it for about 22 months.

“Normally, we figure on a full year of storage and we put it on after wheat on my own fields or on my neighbour’s,” Stokman explains.

He has a corn-soybean-wheat rotation and has been no-till for 30 years. Manure is applied after wheat into either a cover crop like red clover or with oats planted afterwards to have the cover crop capture as many of the nutrients as possible.

“We started farming in 1962 and we’ve been putting manure on since then and since we’re on clay soil, which is inherently higher in potassium and phosphorus, those levels keep going up,” he says.

To help lower his phosphorus levels, Stokman found an alternative home for his manure with a neighbour, a former livestock producer who applies it to his land when he has wheat in his rotation.

Stokman soil tests his fields every three years and, although that gave good average data for each field, he was noticing variability in his crop.

So, he worked with Hensall Co-op to do SoilOptix soil testing instead. Through the use of sensors, SoilOptix generates high resolution topsoil maps that detail in-field variability of soil’s chemical and physical properties.

“That’s kind of an eye opener. I had spots with way too much and other spots where I’m leaving yield on the table because I’m short (on nutrients),” he says, adding the bottom line is that his phosphorus levels are too high.

Reduce soil pH levels
Reducing soil phosphorus levels is also one of Macrae’s key recommendations, as it will lower phosphorus in both surface and subsurface run-off. 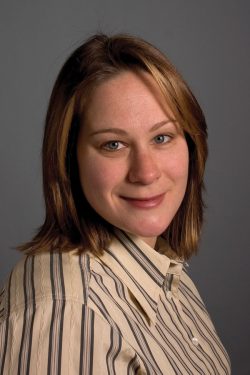 Merrin Macrae is a University of Waterloo professor in geography and environmental management who has spent the past decade studying how climate and soil management influence water quality patterns in Ontario.

During a presentation at the 2021 North American Manure Expo, she encouraged farmers to keep levels to what’s agronomically appropriate, but avoid over-applying, and figure out ways to spread manure out over more fields. Getting soil phosphorus down to what is needed agronomically is a first line of defence that will work on all farms, she noted.

“What we’re really trying to do is optimize BMP selection by being strategic,” she said. “You may only be able to do one BMP, so you want to make sure what you choose is the best for your situation and that it will have a really good effect.”

That means accounting for climate variability, differences in the landscape, tile drainage levels and how land is used. Those differences can extend right into a specific watershed, such as Lake Erie, where the northeast gets more snow and has longer snow cover than the southwestern areas, and soils vary from flat clay to sloping loam.

“Some practices will work well everywhere, like keeping soil phosphorus low, and using the right placement and timing for fertilizer,” she said. “But tillage and cover crop effects will depend on where you live and have to be treated with more care so we’re optimizing what we do to minimize phosphorus losses.”

More information about manure stewardship and nutrient management options is available at farmfoodcareon.org/timing-matters.

This article is provided by Farm & Food Care Ontario as part of the Timing Matters project. The project is funded by the Ontario Ministry of Agriculture, Food and Rural Affairs.