Adrian and Jodi Roelands of Roelands Plant Farms Inc. have been selected as Ontario’s Outstanding Young Farmers for 2016. 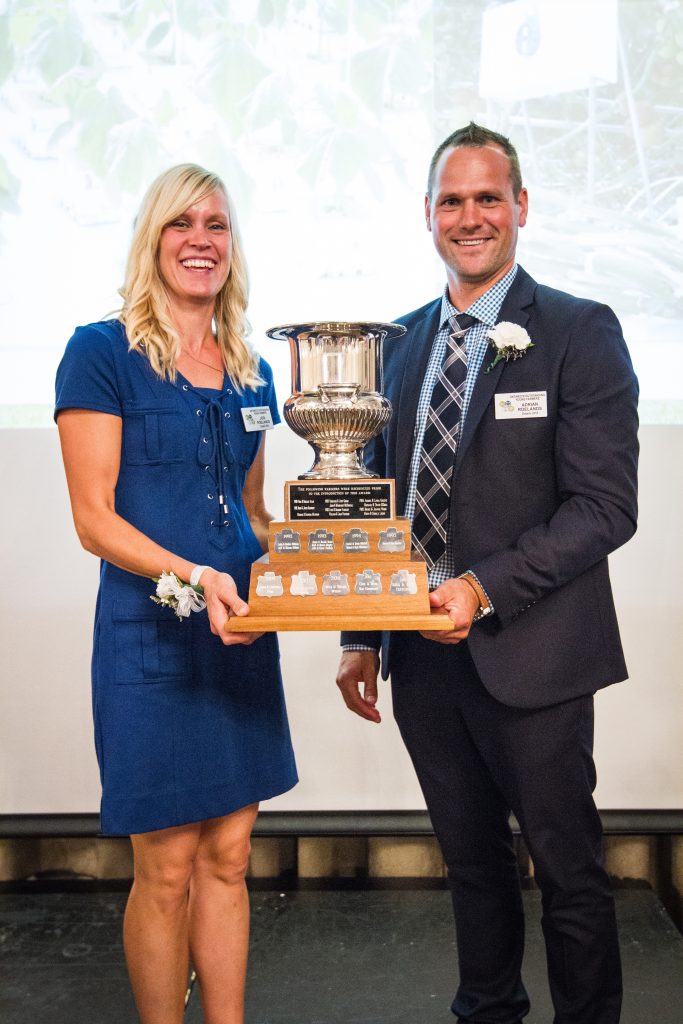 Sept. 26, 2016 – Adrian and Jodi Roelands of Roelands Plant Farms Inc. have been selected as Ontario’s Outstanding Young Farmers for 2016. The winners were announced at the Ontario regional event in Stratford, Ontario on Sept. 13.

Roelands Plant Farms Inc. is a greenhouse in south western Ontario where Adrian and Jodi custom grow premium cucumber, tomato and pepper seedlings for sale to vegetable production greenhouses. Since construction of the greenhouse in 2013, they have since expanded twice, bringing their total operation to 12 acres. The industry uses computer technology to automatically control almost every aspect of climate, and the increasing amount of automation available to growers enables them to produce extremely high quality vegetables while keeping costs competitive.

“The Ontario OYF region put on a great event in conjunction with Outdoor Farm Show in Woodstock to showcase the OYF nominees,” says OYF vice president East Carl Marquis. “Adrian and Jodi really demonstrated their passion for agriculture and I’m excited for them to represent the region at the national event this fall.”

Both Adrian and Jodi have been involved in agriculture their whole lives. Adrian grew up on a farrow to finish hog operation, and Jodi grew up working alongside her family on their broiler breeder operation. Even before they got married, it was evident that farming together was in their future – it was just a matter of how and when.

In 2012 Adrian and Jodi made the decision to venture out on their own, and by early 2013 they had started construction on four acres of greenhouse propagation space on a newly purchased farm. The operation started with just the two of them, and quickly grew to 60 full-time employees and another 100 staff seasonally. Managing a farm like this has meant learning a lot of new skills quickly, and adapting their management styles accordingly.

One of the principles that guide Adrian and Jodi is to remain committed to their agricultural roots, and endeavour to be a leader into the changing future of farming. They see the future of the family farm being much different than the past – it will be larger, more productive and technology based, and will employ more highly-skilled staff.

Celebrating 36 years, Canada’s Outstanding Young Farmers’ program is an annual competition to recognize farmers that exemplify excellence in their profession and promote the tremendous contribution of agriculture. Open to participants 18 to 39 years of age, making the majority of income from on-farm sources, participants are selected from seven regions across Canada, with two national winners chosen each year. The program is sponsored nationally by CIBC, John Deere, Bayer, and Agriculture and Agri-Food Canada through Growing Forward 2, a federal, provincial, territorial initiative. The national media sponsor is Annex Business Media, and the program is supported nationally by AdFarm, BDO and Farm Management Canada.