Cindy Egg Farmerette: Looking back after the build 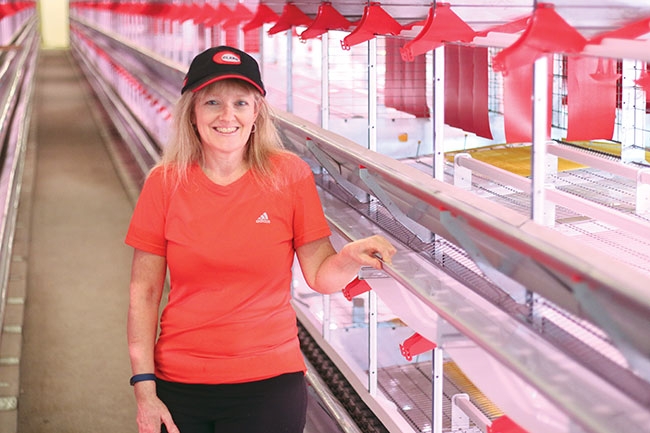 Since last September, Cindy Huitema, egg producer from Haldimand County, Ont., has been documenting her family’s journey transitioning to a new layer housing system with her blog, Cindy Egg Farmerette. In the final installment of her blog, Cindy discusses the process of placing her initial flock and how everyone on the farm is adapting to the new enriched barn and its added technology.

A lot has occurred since the last blog, written just prior to the new flock of laying hens arriving to their habitat of Farmer Automatic Enriched Colony Housing in the new barn.

Electrical was still being worked on the day prior to putting hens in, feed arrived a day or two before and we were still cleaning things up. We quickly realized that it was going to be much easier to do jobs in the barn before the hens came, with the housing empty.

Basically, we went through the barn row-by-row, checking each house to be sure something was not missing or put together incorrectly. For instance, we made sure all of the in-house lighting cords were all zip-tied to housing walls and ceilings so the hens would not be enticed to play with any loops in the cord.

The hens arrived on Friday, May 18, and because we designed room in the barn to build another row of housing, there was lots of space for bringing the carts in. As there were no animals in the barn before, it was extremely clean.

We decided to have housing lights and wall lights on initially so we could have a good view of the birds and their behaviour, and so they could adjust to their new surroundings.

The in-house lighting and barn wall lights have a dimmable feature that is controlled from the ante room.

Lights can be dimmed downwards from 100 per cent to zero per cent, and there is a knob that you can manually turn to dim if you need to.

We also have the dimming programmed through the Genius system to gradually turn brighter in the morning over a period of a few minutes when the hens get woken up, and gradually dim over a period of 15 minutes when late afternoon sleep time comes. In our old barn, the lights popped on and off, and this always startled the hens and caused a lot of noise and movement. With the “gradual” feature, this drastically deceases the stress levels of the hens. Just think, if you are sleeping and someone comes in your room and turns on the light, are you not a little ticked and startled?

The Genius controller is in the ante room and is like the brain of the barn. You can see at a glance what is going on the barn, from how many fans are running and at what speed, to water and feed consumption, barn and cooler temperatures, feed schedule, mortality and more.

Our daughter, and recent graduate, Charlotte has stepped into an Egg Farmerette-in-training role rather easily. And, she was surprised how much more there is to learn. She is taking over more of the record keeping, barn cleaning and ante room routines.

Initially, Charlotte and our son John were much more compatible and versed in the operation of the Genius controller. But, the more we use different components of the Genius, we become more comfortable with the controls.

The perks of a packer
We purchased a refurbished packer from Gary Nairn, who is a local egg farmer and handy machinist when it comes to rebuilding used packers. The packer came about a week prior to the hen install and we have never had one before.

I grew up picking eggs by hand from in front of cages that had two or three hens in them. Our farm here had a laying barn with conventional housing with five or six birds in a unit, and the eggs came to the front of the barn on egg belts and we would pack the eggs into flats.

Everyone was very anticipatory with the new packer as the eggs still come to the front of the barn on egg belts, but then go from elevators to a cross-conveyor that brings the eggs into the packing room.

John is home for the summer from university and, in addition to his off-farm job, he was good at getting the packer working, understanding its mechanics and spotting any housing issues.

The egg packer puts the eggs in trays, advances the trays by belt to a side table and we stack them into stacks of six to put on skids. In the old barn we would gather eggs twice a day – morning and afternoon. But now, in the new barn, we only gather eggs once a day, in the morning, and we find that the packer saves time. It is also a nicer environment, in a separate room from the hens, and seems to be a more enjoyable task.

Perhaps being newbies at using a packer, we are being a bit pretentious – however, I thoroughly embrace this new routine and do not miss some of the struggles and environment of the old barn.

The road ahead
Looking to the future, we feel we have made a good decision in our hen housing choice and thus far we are enjoying 98 per cent egg production and low mortality with the new housing and barn.