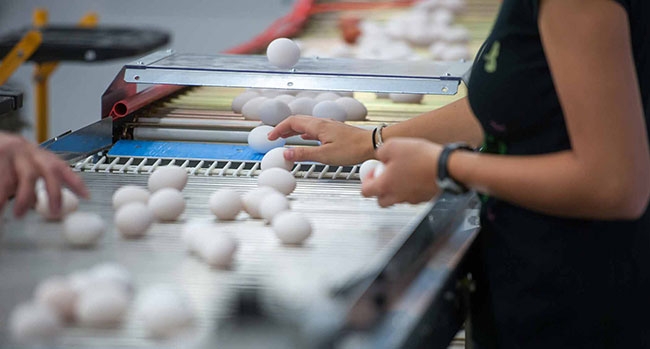 In March of this year, the National Farm Animal Care Council (NFACC) released its new code of practice for layers. The code calls for producers to phase out conventional cage systems over the next 15 years. For many producers, this will mean big change at the farm level. In preparation, Canadian Poultry has gathered the stories of three Canadian egg producers who’ve already made the transition.

Enriched Cage System
Glen Jennings, Nova Scotia
Glen Jennings is an egg producer based in Masstown, N.S. The fourth-generation producer has been farming since he gradated from Nova Scotia Agricultural College in 1989. Jennings raises 14,000 hens, 7,000 of which are replacement pullets. His farm also produces 40 acres of pumpkins and squash for the fall market. Jennings represents Atlantic Canada on the Egg Farmers of Canada Board, where he has served as second vice chair for two years now. Jennings has two children: Amy, 11, and Blake, 22, who works full time on the farm.

It was 2012 when he first thought about making the transition from conventional cages to enriched housing. One of his two barns was nearing the end of its lifespan and desperately needed replacing. That’s when he started looking into alternative systems, specifically fully furnished enriched housing.

“It was quite beneficial at that point to be on the national board because you get to go to meetings across the country and meet producers from every province,” Jennings says. “Some of these producers would already have transitioned into alternative housing. Whatever our knowledge is, we’ll share.”

In 2014, Jennings toured operations in the U.S. and in Ontario, after which time he made his decision, ordered the necessary equipment and built a new barn with a fully enriched system. The first flock went in mid-May of 2014. Jennings is currently in his fourth flock.

In the old conventional system, Jennings’ birds were housed at 67-square-inches. The new system, designed by Big Dutchman, offers considerably more space at 116.25-square-inches. The birds are also provided with a nesting box, perching space and a scratch pad area where they can dust bathe and scratch.

The result, Jennings says, is that everything is much cleaner. The air quality is better and overall mortality is lower. He also sees better feed conversion, which, in turn, leads to higher production.

“Four years later, it is still such a pleasure to walk into that barn compared to our other conventional barn,” he says.

Free-Run System
Charles-Éric Bouchard, Quebec
Charles-Éric Bouchard, 21, is a fourth-generation poultry farmer from St-Gédéon-de-Beauce, Que. Last year, his family doubled the size of their flock. With Bouchard near graduation, his parents, Paulin and Michèle, felt it was a good way to introduce him to the farm. Today, they have 26,000 birds in a free-run system, with another 21,000 in conventional housing. Bouchard is currently studying agribusiness at Laval University. He will graduate in December of this year.

The move to free-run was an obvious one for the family. “We knew that the market was expanding into free-run,” Bouchard says. “The consumers decide what they want to buy, and at that time there was increasing demand for free-run eggs. For us, it was more natural to go where the consumers are actually going.”

After exploring his options, Bouchard chose an aviary system designed by Hellmann Poultry Equipment. The new system proved challenging and meant a change in management style.

In the next few years, the family plans to upgrade the conventional barn, which currently houses 21,000 hens. At this point, though, they’re not sure what type of housing system they will go with.

“It’s a great challenge for me, since I’m a new egg producer,” Bouchard says. “I’m just finishing my degree now, and I was thrilled to try and do something different – something that we have never done before,” he concludes.

Free-Range System
Scott Janzen, British Columbia
Third-generation poultry farmer Scott Janzen is located in the B.C.’s Fraser Valley near Abbotsford. He raises layers, 12,000 of which are in conventional housing and 9,000 in free-range production. Janzen also custom raises 50,000 pullets each year. After working off-farm for 20 years, Janzen bought the family farm when his father was ready to retire in 2007. He brought with him 20 years worth business experience, which he says has helped him to build more success.

In 2014, when the opportunity to move to free-range came up, Janzen decided to make the leap. He knew the market was moving towards cage-free production, and thought the transition made good sense.

The transition wasn’t easy, though. Janzen describes it as challenging, although he admits that it’s a challenge he loves. “Free-range production,” Janzen says, “requires a totally different management style. It is more work, but I enjoy it more because you actually have to go in there and you farm different. You have to be much more observant and aware and have an understanding of what’s going on around you in an aviary system or a cage-free system.”

When Janzen made the transition in 2014, there were just two other farmers using aviary systems in B.C. As a result, he spent a lot of time gathering as much information as possible, assessing it closely before making the decisions that best fit his farm business.

“When I decided to do this, I had to be all in,” he said. “You can’t do aviary production part time. You really have to want to do it.”