Experts weigh in on current trends and new features. 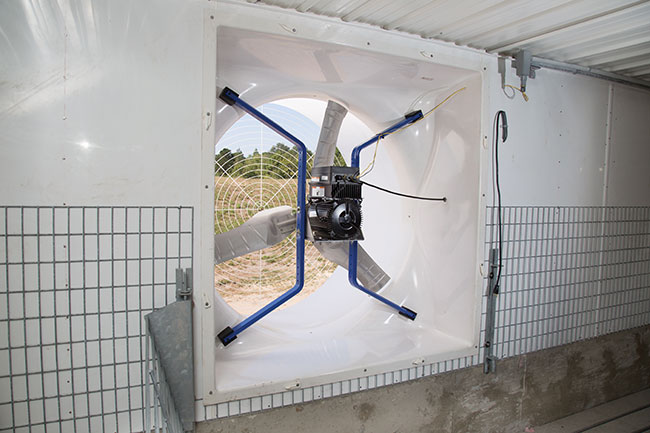 Technology in poultry barns has evolved to address a variety of new factors over the last 10 years, from new barn design to efforts to increase bird welfare to advanced bird genetics. Circulation fans are no exception.

Perhaps the biggest driving force in circulating fan evolution over the last few years is the increase in size of poultry barns. Fans have, therefore, had to become larger and more powerful to ensure air movement is both sufficient and efficient, explains Doug Martin, national sales manager for Canada at Cumberland Poultry.

Bird density has also increased in these larger barns, he adds. This has heightened the need for proper air circulation.

However, according to Niels Dybdahl, owner and head of sales at DACS, as fans for the poultry market have increased in size, they have not really gotten much more efficient. “This is due to the fact that these fans have never been aerodynamically optimized,” he asserts, “and they have all been traditional on/off fans.”

In the same vein, Scott Mulka, product manager at Munters, has seen fan materials evolve from mostly galvanized components to non-corrosive materials like fiberglass and high-strength polymers. These materials are able to handle the tough conditions of the poultry barn environment for as long as 25 years or even longer.

It can be difficult to sort through how the various fans on the market differ from one another. It’s also challenging determining what features matter most. For tips, Canadian Poultry talked to experts. 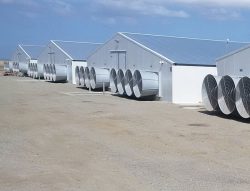 The DACS MagFan has been on the European market for about five years but has recently arrived in Canada. Photo: DACs

The DACS MagFan has been on the European market for about five years but has recently arrived in Canada. Its efficiency stems from the aerodynamic shape of the housing, the cone and the motor, as well as the fact that the motor is direct-drive.

“Where other fans use belt-driven fans (there is a belt from motor to impeller), the MagFan is a direct-drive fan (impeller directly mounted on the motor), and just this alone provides approximately 15 per cent higher efficiency,” DACS’s Dybdahl explains. With the aerodynamics added in, the MagFan is 40 per cent more efficient than a belt-driven fan at full speed, he notes. The capacity for producers to control fan speed through the variable-frequency drives makes the technology even more efficient.

Dybdahl explains that when the MagFan runs at half speed (traditional belt-driven fans are either ‘on’ at full speed or off), its energy consumption is only 12.5 per cent of what’s required for full speed operation. “[This is what] makes the MagFan capable overall of saving 75 per cent of electricity cost compared to traditional on/off fans,” Dybdahl says.

“Additional advantages of the MagFan is a more uniform airflow in the barn and, due to the speed controlling, the air flow pattern in the barn stays the same and, hence, much better climate can be achieved.” 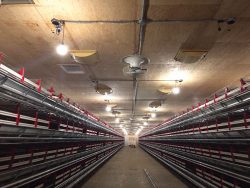 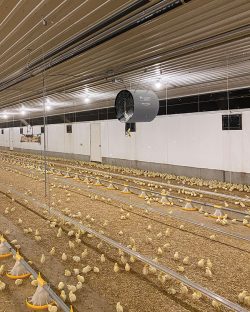 The Canarm 24” PCF-EC series fan with ECsmart motor, is the most energy efficient fan on the market for 0-10 volt variable speed air movement and destratification. Photo: Canarm

Canarm AgSystems’ 24” PCF-EC series fan employs ECsmart motors in both its exhaust and circulation fans, enabling power savings up to 75 per cent, poultry products manager Nicholas Wilson says. “The Canarm 24” PCF-EC series fan with ECsmart motor is the most energy-efficient fan on the market for 0 to 10volt variable speed air movement and destratification,” he reports. 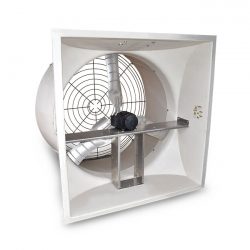 The Cumberland Poultry Commander direct drive fans (in 36” and 54” sizes) offer both high efficiency and high output. “They are constructed with durable fiberglass and poly cone options,” Martin says, “with a permanent magnet motor that runs cool to the touch and supplies constant torque to the propeller.

“Commander fans feature an industry-leading drive that allows for the use of failsafe relays or back-up thermostats as required. Other benefits include reduced total fan energy costs as well as low maintenance, with no belts, pulleys or grease.”

Munters describes its CX24 as a high-powered fan in a small, flexible package. Photo: munters

The patent-pending chevron design on the outlet is engineered to reduce sound levels, Mulka says, and the fan is also made of corrosion-resistant materials. “The advanced design of the CX24 produces a higher centerline velocity while decreasing the spread of the air flow,” he adds, “providing you with more control.”

Looking forward, Steve Ford of the University of Illinois believes that future fan-related efficiencies may be gained not only by improving the fan itself, but by improving the barn air movement system.

He asks, “Can we provide air movement where it is needed, and also save energy by lessening air velocities where it is not needed?” More research of where air is needed or not needed for different types of poultry would likely be required for that to come to fruition.