August 2, 2017By University of Alberta 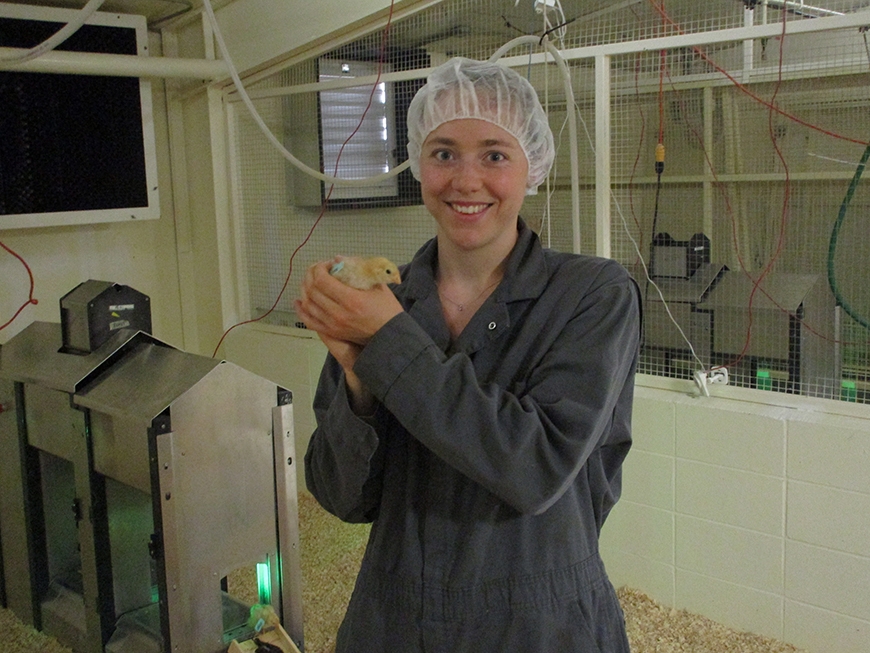 Sasha van der klein is studying how the reproductive success of broiler breeder chickens is affected by day length and control of their body weight. University of Alberta

August 2, 2017, Alberta – As a child, poultry researcher Sasha van der Klein didn’t beg her parents for a puppy, but for pet chickens. By eventually fulfilling her request, her parents put her solidly on the path that has led to a Vanier Scholarship, Canada’s most prestigious award for PhD students.

Van der Klein’s award is one of 10 Vaniers earned by University of Alberta students for 2017, and the only one for the Faculty of Agricultural, Life and Environmental Sciences, where she is studying under the supervision of Martin Zuidhof, an expert in poultry precision feeding.

Her thesis is investigating how day length during the rearing period of broiler breeders and controlling their body weight affects their reproductive success and nesting behaviour.

“When you give them too much light, it prevents the birds from becoming sexually mature and laying eggs in the year they are hatched,” said van der Klein.

Broiler breeders, the parents of the meat-type chicken, have to get short day lengths when they grow up, to mimic the winter season, just as most birds get in nature, she said.

“This helps the chances of survival of the offspring—it’s essential for the offspring to be hatched in favourable conditions. In nature, the parents sexually mature in spring, and that increases the chicks’ chance to survive. The cue is day length, as winter days are shorter than summer days.”

By answering such questions as how long the hens who had light controls during rearing look for a nest, how long they sit on the nest, and how many eggs they finally produce, she hopes to offer the poultry industry solutions for an array of concerns. These include the high percentage of unusable floor eggs broiler breeders are prone to lay, the poor overall productivity of broiler breeder hens, and also how producers can be most efficient with feed.

Vanier Scholarships are worth $50,000 per year for three years and are difficult to attain because selection criteria includes not just a student’s academic excellence and the research potential of their project, but also the leadership the students demonstrate in their community or academic life.

Although van der Klein is an international student who moved from the Netherlands to pursue her PhD at the University of Alberta, she quickly became immersed in assisting with complex student affairs on campus. For the past two years, she has been the vice-president of labour for the Graduate Students’ Association, assisting graduate students with compliance issues in their research or teaching assistant contracts. This year, she will be negotiating a new collective agreement for graduate students at the university.

The Vanier Scholarship definitely relieves some of the many challenges a PhD student must cope with, and that’s especially welcome when a thesis project involves responsibility for the welfare of more than 200 chickens, said van der Klein.

“I’m thankful to have a great team and many volunteers that helped me during my experiments, but even then the commitment to being a farmer at the same time as being a student is an intense responsibility,” she said.

“By controlling this variable, we have already had important new insights into sexual maturation that have not been possible previously,” he said. “Ultimately, commercial application of Sasha’s precision feeding research could decrease nitrogen, phosphorus and CO2 emissions by the broiler breeders by 25 per cent, which is transformational for the poultry industry.”