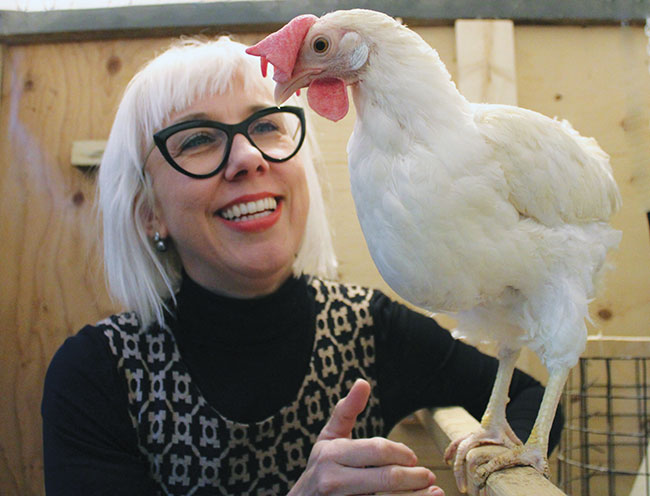 If you asked a researcher what they’d focus on if money were no object, there are few who’d say they’d do exactly what they’re doing today. And while University of Guelph researcher Alexandra Harlander hadn’t thought about a future in poultry, after working with her first farmers, she couldn’t resist the work.

Her research is unique in that it brings together veterinary medicine and behavioural studies. This allows her to address some of farmers’ biggest concerns, especially around feather pecking and keel bone damage in aviary systems.

Early passion for animals
From a very young age, Harlander knew she wanted to work with animals. Growing up in a small village in Austria, she felt close to nature, and especially to animals. So, while other little girls said they wanted to be ballerinas or actors when they grew up, she always said she wanted to be a zoologist.

After high school, she thought about studying biology, but later decided to study veterinarian medicine instead. It’s proven to be an asset. While she’s surrounded by specialists in animal biology and animal agriculture, not many have a background in veterinary medicine.

“I think it makes me very unique in my field,” she says. “Not so many people working with farm animals link it so much to physiology or to nutrition.”

Chooses Guelph
Post-graduation, Harlander worked at a poultry research facility in Switzerland before being offered two positions, both at highly regarded universities: UC Davis in California and the University of Guelph. She chose the latter. “I chose Guelph because it’s a wonderful group,” she says, highlighting its diversity and cooperative spirit.

Harlander especially likes the university’s collaborative approach, as it allows her to work closely with veterinarians, animal and bio-scientists as well as integrative biologists.

“I think it’s a unique approach,” she says. “I have extremely nice colleagues, and I think, for me, this is very important, having a good working environment to produce good research output.”

Perhaps what she likes most about Guelph, though, is having the ability to work on a research farm. Many of Europe’s top universities closed their research facilities, she said, which makes similar research there very challenging.

“I think, personally, it’s good that we can conduct some research in our field with farm animals on the farm,” she said. “But it’s also important that they have a research farm, as I’m doing a lot of fundamental research.”

Applied science
Linking fundamental research with applied problems is Harlander’s specialty. Since her very early days, she has been fascinated by the problem of feather pecking. A call for a graduate student to conduct research on a company farm presented itself, and she took the opportunity. The job was on a small company farm in the Austrian Alps.

The company wanted to better understand how pop-hole dimensions in aviary systems with outdoor runs impacted the number of birds that went outside. Harlander moved to the commercial farm and set up her experiments.

“This was my first contact with chickens,” she says. “I had a little apartment on the farm. It was in the middle of nowhere – it was beautiful there – and I lived with the chickens.”

During her time on the farm, she was invited to join an auditor on visits to the company’s other farms. “This is how I ended up with feather pecking,” she says. “I realized they were going outside, but they were naked.”

Feather pecking focus
The feather pecking question stuck with her. From farmers she learned that it was a bad sign when there were no feathers on the floor during rearing. This means they’re eating the feathers, she says. And where there is feather eating, there is usually feather pecking.

The puzzle has brought her to other questions around gut composition, feed passage time and the role of the gut brain axis in chicken behaviour. She’s found, for instance, that high feather pecking birds lack lactobacillus in their gut, a bacteria that’s present in birds that show little to no pecking behaviour. She also found that the enteric nervous system responds immediately when lactobacillus is added to the diet. This work has been published.

Driven by unanswered questions
Harlander says her research is driven by the need to answer a question, and this is how she became a specialist in poultry behaviour.

“I really wanted to know why they pecked each other,” she says. “They have a lovely environment, they’re in small groups, but still they peck each other.”

“It kept my attention,” she adds. “I really wanted to find out why.”

The question still drives her research today. While she believes it’s a multifactorial issue that involves environment, nutrition, social stress, the answer is not yet clear.

Research in feather pecking has led her to another area of interest: keel bone damage in aviary systems. Despite years of study at institutions around the world, it is still difficult to understand how hens sustain so much damage to their keel bone. Harlander believes it has something to do with the velocity with which they hit the ground when they fall from higher tiers, but the answers aren’t clear just yet.

Right where she belongs
Interestingly, when asked what she would do if budget wasn’t limiting factor, she says, “Honestly, I’d do fundamental research and applied research in the field of feather pecking.”

She adds that maybe it would be nice to work with more students and have a larger research facility within which to work. And while it might be the questions that drive her, ultimately, it’s the farmer that she most wants to help.

“It’s sometimes really heartbreaking for farmers,” she says. “They do everything, they try everything and these girls peck each other. This can be really frustrating.”

“I love my research,” she adds. “And I think I’m unique because somehow I work together with so many other fields… fields that never work with chickens. I think this enriches our research.”