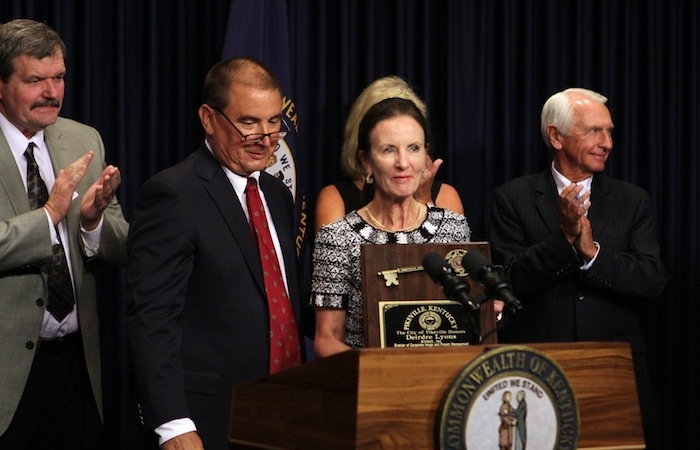 Mrs. Deirdre Lyons, co-founder and director of corporate image and design at Alltech, accepts a symbolic key to the city of Pikeville from Pikeville, Kentucky’s mayor Frank Justice (pictured left). Kentucky Governor Steve Beshear (pictured right) announced nearly $6 million in funding for the development of an industrial park in eastern Kentucky, where Alltech has committed to building layer and aquaculture facilities. Kentucky Office of Creative Service

July 24, 2014 – Alltech has announced plans to develop a poultry layer and aquaculture facility in the new Marion Branch industrial site in Pikeville, Kentucky.

The global animal nutrition company, headquartered in Nicholasville, will become the first occupant of the on the new site.  The Marion Branch industrial site is a project that incorporates the objectives of the Shaping Our Appalachian Region (SOAR) initiative, begun by Governor Steve Beshear and U.S. Rep. Hal Rogers in late 2013 to revitalize the struggling economy in eastern Kentucky counties.

The company says the initiative falls in line with its core business in animal nutrition, implementing its sustainable and natural solutions designed to help farmers feed a rapidly growing world population of 9 billion people by 2050.

“We are delighted to have the support of Gov. Beshear, Congressman Hal Rogers and the Commonwealth of Kentucky that will make it possible for Alltech and other companies to operate at the Marion Branch Industrial Park,” said Deirdre Lyons, co-founder and director of corporate image and design at Alltech. “We are also thankful to the City of Pikeville for their continued support and shared vision for prosperity in eastern Kentucky. We hope that through our decision to build an aquaculture and layer facility at Marion Branch, as well as a new brewery and distillery in downtown Pikeville, we can be a catalyst for further economic development in the area.”

Marion Branch is a 380-acre former surface mine site that is within Pikeville city limits and owned by the city. Pikeville City Commission worked to obtain the infrastructure of a bridge, road, water and sewer to encourage business development in the area.

The Pikeville/Alltech announcement is in line with the efforts of the 10 SOAR working groups that are leading discussions throughout the region on topics related to eastern Kentucky’s future economic well-being and quality of life. Based on citizen and organizational input, the groups will identify significant opportunities and a long-term vision related to their topics. The working groups’ focus areas include broadband; agriculture, community and regional foods; business recruitment and incubation; education and retraining; and health.