Dispelling the Myths.  Using antibiotics as a livestock growth promoter increases the risk of
human antibiotic resistance, a Marshfield Clinic researcher and his
colleagues have found. 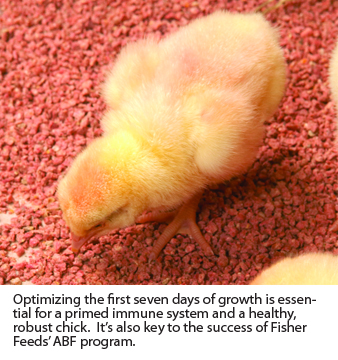 Using antibiotics as a livestock growth promoter increases the risk of human antibiotic resistance, a Marshfield Clinic researcher and his colleagues have found.

With this knowledge, feeding antibiotics is no longer just about production and profits, it’s now a moral question, Derek Detzler, research and development manager for Fisher Feeds told attendees at the Ontario Ministry of Agriculture and Food and Rural Affairs (OMAFRA) producer updates in Guelph, Ontario.

And it’s an especially important question if poultry and producers can get along just fine by reducing or removing the current spectrum of commonly used drugs.

Detzler asked attendees, “If we can produce healthy, happy birds economically while reducing or removing antibiotics, isn’t it our moral responsibility to do so?”

Based on the current worldwide industry trend, Detzler said that Fisher Feeds recognized that growing birds without the use of antibiotics was the way of the future. This is vitally important because there is immense pressure on the livestock industry to eliminate the use of medically important antibiotics for non-therapeutic (i.e. growth promotant) uses in livestock.

Removal of Drugs in Feed: A Worldwide Push
Organizations such as the American Medical Association, the World Health Organization (WHO) and numerous medical experts worldwide have advocated ending nontherapeutic uses of antibiotics in livestock for good.  In 2006, the European Union banned non-therapeutic use of antibiotics in livestock feed and the U.S. is moving in the same direction.

Most of the major U.S. poultry companies have dramatically decreased or eliminated the use of drugs in feed.  Tyson Foods has reported that their use of antibiotics fell to 59,000 pounds in 2004 from 853,000 pounds in 1997. In September of 2006, Gold Kist became the first major U.S. poultry processor to offer antibiotic-free products with the introduction of their New Nature Select™ brand.

While regulatory and health concerns are a couple of reasons the big food companies are moving away from the drugs, there are also strong commercial reasons. Today’s markets are already paying higher prices for branded products that differentiate themselves from bulk, generic commodities, said Detzler, and this is a consumer trend that will only continue.

“World prices for bulk, undifferentiated commodities will be under downward pressure for years to come,” he said.

Many consumers want to know more about their food, how it was raised, fed, and processed. They will use what they learn to tailor their food purchases, and this will put a lot of pressure on all of the industry stakeholders.

“The Canadian poultry producer can continue to produce commodity chicken but potentially risks lower prices in the future if import tariffs are reduced. For longevity, look to produce higher value livestock for premium markets,” said Detzler.

Fisher Feeds’ ABF Program It began with an idea…
Since 2004 Fisher Feeds has been testing, developing and formulating their feed with the goal of reducing, and ultimately eliminating, antibiotics.  Detzler said it began with the desire to tackle coccidiosis and prevent resistance before it became a potential problem.

Like many feed companies, Fisher Feeds was incorporating anti-coccidials into their feed to help manage the disease.  But owner and CEO Dr. Rae Fischer* wasn’t convinced that medicated feed was the only effective option available. With no new drugs being developed, he was concerned the birds could develop resistance, said Detzler.

With this in mind, Fisher Feeds decided to replace coccidiosis medications with three consecutive rotations of a hatchery applied coccidiosis vaccine.

In 2004, the company met with their supply chain partners, which included customers, mill staff, and hatchery/ processing personnel. They discussed this new approach, and decided to incorporate three continuous cycles of Coccivac B®. This would start in the spring, and run through to the fall. In-feed treatments resumed in the winter of 2004.

While using the vaccination program, Fisher Feeds found that the performance was equal to birds receiving drugs in the feed and recorded only one case of necrotic enteritis and one cocci break (due to E. tenella) on over three million birds.
Encouraged by these results, Fisher Feeds utilized the vaccination program again in the spring of 2005. This time, they noticed that with each successive vaccinated flock, there was an incremental increase in performance.

Detzler said that the company pondered whether or not this increase in performance was due to the absence of in-feed anticoccidials. He questioned if birds were being held back by sub-clinical coccidiosis due to resistance or leakage in late growout while using antibiotics.  Or, could it be that the vaccinated birds were becoming immune to the disease early, allowing optimal absorption of nutrients in the later stages of life?

Regardless of the reason, the increase was well received and Fisher Feeds made the decision to continue vaccinating year round, which is still the norm for their corporate farms and most customers today.

Their corporate farms and select customers began recording and analyzing daily weights of the individual chick. They found that not surprisingly, weight gain has a direct correlation to bird health and management and that even seemingly slight differences in early weight gain will multiply as the bird matures.

This led Fisher Feeds to formulate and develop a novel prestarter that maximizes early growth, allowing the gut villi and immune system of the chicks to develop and reach their full genetic potential.

“The industry hasn’t been capitalizing on the potential efficiency of early chick growth,” said Detzler.  “It’s shocking, the growth potential not being exploited.”

A unique feature of the prestarter is that it is red – a colour known for decades to be attractive to chicks. Initial results have led Fisher Farms Ltd. to apply for a patent in 167 countries.

“We’ve come a long way from where we were,” Detzler says. “Due to benchmarking, management changes and nutritional fine tuning, we are routinely hitting 200 grams at seven days, and we’re working hard to find each additional gram.”

The Next Step: ABF
Recognizing they had an extremely robust chick that was encroaching on its genetic potential, Fisher Feeds began phasing out the use of a necrotic enteritis prevention drug and began testing natural alternative products. By April 2006, all birds placed on Fisher’s corporate farms were raised without in feed antibiotics. To date, 83 per cent of more than three million birds have gone to market without the need for any treatment whatsoever.

Matthew Fischer, operations manager for Fisher Feeds and Bert Fisher Farms Ltd said  “Unfortunately, many in our industry have tried to discredit and ignore the plain simple fact that it is being done economically and efficiently on a commercial scale.”
“Most of our customers have reduced their antibiotic useage by 75 per cent, and are on the threshold of being completely antibiotic free. They have not given up economic or growth performance versus typical antibiotic programs,” Detzler said.

The scientific proof is there that we don’t have to feed so much (antibiotic). We have the tools in our toolbox to make this work.”
Fisher Feeds believes that the key to its ABF success is priming the immune system of the chick in the first seven days by using the novel prestarter, a sound vaccination protocol, and paying attention to detail – targeting treatments and barn management during times of stress.

Detzler said Fisher Feeds feels that it has made the moral and more environmentally safe choice.  Prudent use of antibiotics will help keep the drugs working longer, prevent human resistance from developing due to residues in food and the environment, he said.

Product Development Manager Brian Durrer commented on marketing.  “We’ve received a lot of interest from Canadian processors. We are also exploring the idea of marketing ABF chicken under our own label. This can take a lot of time and effort, but we feel the market is there.”

ABF chicken could be on Canadian grocery store shelves as early as March, he said.

* Although Dr. Rae Fischer and his company, Fisher Feeds, have similar names, they are spelled differently.