The science behind maintaining gut health without antibiotics. 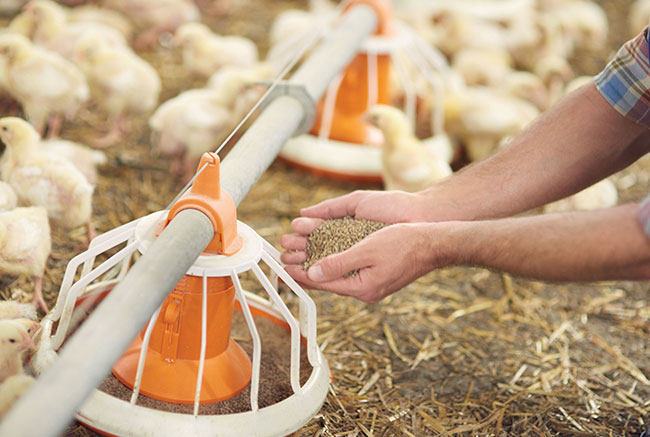 So far, nothing replaces antibiotics in terms of feed conversion or growth.

There is no silver bullet that will replace antibiotics in maintaining a healthy gut. The bottom line is, antibiotics work. The reality is, they will need to be replaced. Are there alternative solutions out there now to maintain gut health or just ideas?

“I never really know what is efficacious and what is good salesmanship,” admits Dr. Lloyd Weber. As a practising veterinarian and a poultry producer, Weber knows that farmers want products that act under a wide variety of circumstances, that are easy to use and, most of all, that are economically viable.

At a fall meeting hosted by the Poultry Industry Council in Guelph, Ont., Weber described an industry that he predicts will be all raised without antibiotics (RWA) in three to five years, following the lead of the EU.

Europe does well, Weber said, but they keep coccidiosis – the number one disease pressure – under control. To him, it’s “not a big deal” that antibiotics will be gone as long as we can keep our ionophores and he also predicts that vaccination use will increase.

The problem now is, while many alternative interesting gut health management ideas are out there, many have yet to be scientifically proven to be effective in terms of their production or economic value.

So far, nothing replaces antibiotics in terms of feed conversion or growth. That said, there is enough work published to pique interest. A farmer may just say, “If it pays, I’m happy.” But ideally, we want it to do more than pay. 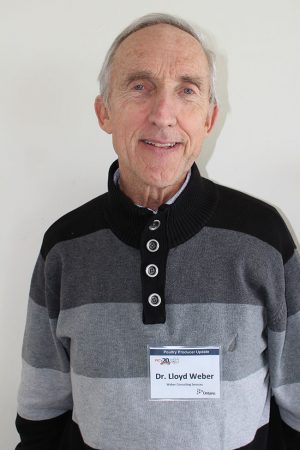 It starts with water
Good gut health starts with good water, Weber said: “Insist on excellence.” Historically, water treatments have included chlorine, hydrogen peroxide and other lesser used methods such as ultraviolet and filtration. Eighty per cent of Canadian farmers still use hydrogen peroxide, Weber noted, while many Americans use only chlorine dioxide, which is far superior because it is effective at any water pH.

But what really works? He’s seen producers spend upwards of $100,000 on water treatment – with the only noticeable result being their toilets aren’t brown anymore. He has seen one farmer spend $2,200 for an H2O2 product that was supposed to be better but instead his E. coli got worse with every crop. When they tested the H2O2 level it was 1 ppm; hydrogen peroxide won’t work below 30 ppm. Since every farm is different, he suggests a chemical analysis of the water as well as the typical bacterial analysis. Off-the-shelf solutions may not work.

The efficacy of water treatments is difficult to interpret. If you do a water treatment and you don’t monitor your water for bacteria and minerals, the treatment is useless. The water treatment devices themselves take a lot of monitoring – are they working? Weber is often shocked that people would do any treatment without checking for iron mush, manganese or slime or calcium buildup that may reduce the effectiveness of any additive, noting that a lot of sludge builds up with low pressure and warm environments.

Lowering the pH of water is helpful, Weber said. Pointing to a 2003 broiler trial at the University of Guelph that compared a pH of 7.2, 6, 5, and 4, a pH of 5 gave the best performance overall. At pH 4 there was less bacterial growth but the results were not useful because the drinkers plugged up as sludge was released from the lines and eight per cent of the birds were lost to dehydration. This emphasized that water lines must be clean or sanitized before starting with a new product.

Weber compared the process to going to the dentist: You need to have plaque removed from your teeth, just like the buildup inside water lines needs to be removed too. Does a pH of 4 give better performance? Some trial results using organic acid and chlorine dioxide have shown a little better feed conversion and also a difference in water consumption. Birds can sense the taste of water better than humans do – a chicken has a greater ability to respond to an acidic pH.

Organic apple cider vinegar is very costly but some producers swear by it; inorganic acids are good or bad depending on whom you ask. It’s mainly about economics, but factors such as the baseline water quality or using open drinkers versus nipple drinkers will also give different results. Open drinkers are at a greater risk for bacterial contamination; you’re more likely to get clean water from a nipple.

Ultimately, Weber has learned that if you’re going to put additives of any kind in the water you better have good quality water to be sure the product is even getting to the bird.

Enzymes, pro- and prebiotics and yeast
Enzymes in feed have shown some response in feed conversion and weight gain, compensating for those young broilers who don’t have the enzyme capability able to digest feed fully in first seven to 10 days or may have difficulty digesting soybean meal. Poor digestion may result in gut upset resulting in looser droppings, which in turn results in increased NE. The use of enzymes in feed results in less undigested protein in the lower gut. Weber sees further potential for providing enzymes in water, something that producers are reluctant to add to the water because they don’t want the hassle.

The activity of probiotics and prebiotics is still unclear. So far, Weber is not seeing negatives but neither is he reporting great positives.

There are yeast additives as well – cell wall yeasts or enzyme enriched yeasts. In a process known as “competitive exclusion”, cell wall yeast sets up barrier at the villi so bad bugs can’t attach.

Essential oils and other ideas
The practice of using essential oils typically travels from Europe, where they are more commonly used, to Quebec, to Ontario. Weber will go into a broiler barn and smell a variety of scents, everything from cayenne pepper to extracts to acid – so many that he quips, “I’ve got to run to keep up!” Right now, he’s involved with an Agriculture Canada research trial assessing encapsulated cinnamaldehyde and he’s very impressed.

There are lots of stories of other products too. Weber heard from a company in Ireland who want to use algae, claiming it can help to provide the same omega 3 fatty acids from broilers that you can get from salmon. That’s just one of the stories he hears, to which he responds, prove it!

More science is needed
What all of this tells Weber is that we don’t necessarily need an antibiotic to get good performance. Are you being proactive or using additives for treatment? Prevention is better than treatment but it’s harder to quantify.

Are you using good science to test and evaluate your results? Are the results significant? Are they repeatable across different flocks and chick qualities, and in different seasons? If you’re using a cocktail approach, what part is effective? It can be difficult to assess.

Ideally, we’re looking for decreased disease plus increased performance and, ultimately, some sort of synergy where one plus one is greater than two. Looking ahead, we need to document everything and somehow share that information.