Most barns in Ontario will require modifications to accommodate modular loading. 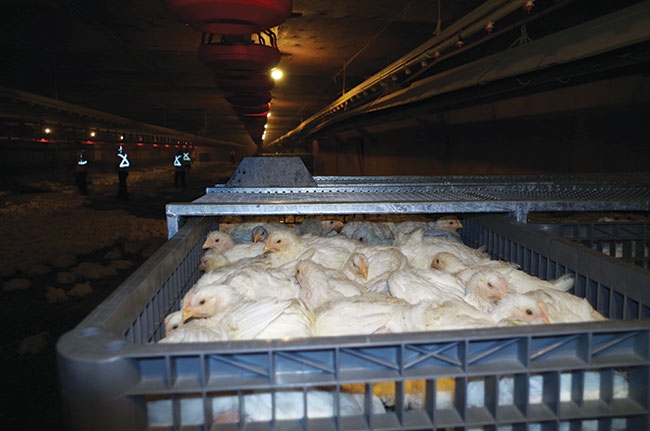 In terms of the modular handling of poultry, Ontario and Quebec lag decades behind Europe and the rest of North America. But, that may be changing soon.

“A lot of it’s just based on what we have to do moving forward,” Richard Mack, president of Riverdale Poultry Express in Elmira, Ont., says. “As an overall industry, we need to keep up with the rest of the world.” While the benefits won’t likely outweigh the cost, modular handling does address animal welfare concerns by enabling gas stunning.

For chickens, modular transport means that the birds are placed in drawers or baskets in the barn that are then stacked in a module and moved to the truck by forklift. The birds will ride in a nested position during transit so they don’t flap and move around, avoiding injury. Once in the drawers the birds no longer have to be handled individually, reducing the stress levels and injury potential, while allowing quick and efficient processing at the plant.

For turkeys, the system is a little different to accommodate the size and nature of the birds. The birds are still loaded on the truck either by autoloader or hand catch. Mack says, “you won’t get a turkey to get into a drawer and have it sit on command – it’s not going to happen.”

At the plant, the modules are brought into a climate controlled lairage facility where the drawers can be removed and put through a gas stunning chamber or pit. Gas stunning is hard to do for an entire trailer at once, Mack explains. There are time requirements as far as timing. An entire trailer load takes an hour or two to process, so gassing the entire trailer is not feasible. A modular set up gives you the advantage of being able to do smaller sections at a time.

For processors, a modular plant requires more space for lairage, which may be difficult for some and expensive for others. There are 31 provincially licensed chicken and fowl plants in Ontario and 34 federally registered poultry meat establishments in Ontario and Quebec.

Are catchers prepared? Mack says it depends on the environment. The turkey industry might not experience a big change because they’re still going to herd the birds onto a loader or catch them. The turkey loader conveyor will stay the same, already ergonomically correct for workers to address the human component of loading. Turkey loading won’t get any faster with modular handling, using the same amount of work and catchers. The biggest change for the turkey sector will be at the processing level.

For chicken, it’s a big investment for the catchers because the modules do come off the trailers and go into the barns, requiring forklifts. Mack predicts that the loading time will be shorter for chickens, with crates typically loading in one-and-a-half to two hours with seven or eight people being reduced to loading 10 to 20 per cent lower volume in 45 minutes to an hour with five people, including the forklift operator. Two and three story facilities will take longer.

MODULAR MODIFICATIONS
Are farmers ready? “Some are, some aren’t,” Mack says. “On the turkey side, as long as the loading stays similar to what we have today, they’re prepared. It’s not a big deal. If they have room for a truck and trailer at their facility, either hand load or auto load, it should be fine.”

For chickens, under a new regulation introduced in July 2017 in Ontario, chicken farmers and processors will need to be modular loading ready by Dec. 31, 2024. The regulation prescribes the requirements for equipping existing and new chicken barns to accommodate modular loading, a process that will initially be led by the processor.

Once the processor declares their intention to implement a modular system, the farmer has 56 weeks, or seven quota periods, to become modular compliant. The farmer has the option to switch processors if they choose not to comply at that time.

Most barns in Ontario will require modifications to accommodate modular loading. In the province today most trucks are just loaded beside the barn. “On the chicken side, obviously it’s a whole new dynamic,” Mack says. “When you move to a modular system, you will need to consider if can you drive a forklift inside the first floor of your barn? Do you have enough room for loading the truck?

If you have a second story do you have side-loading available? Do you have a 30 to 35-foot laneway beside the barn for the forklift to turn? If you have a third floor, you’ll also need pass down holes so catchers can work through.”

Mack sees the one-storey, open span barns as the easiest to convert. Two-storey are a pain, needing a little land around them to adopt side door loading as needed.

The second floor must also be engineered to hold 2,800 pounds of load to support a typical full module. Some have installed a custom track system in a second floor but from his experience, anyone who has done that wouldn’t go back and do it again. Three-storey are a bigger challenge but at present there are only approximately 117 three-storey barns in Ontario and the switch to modular will likely see more decommissioning of these barns.

As of January 1, 2017, all new barns must be single storey to accommodate modular loading except where two-storey are required by local regulations to provide a smaller footprint.

PAYBACK
If the transition to modular loading is costing us, without any tangible economic advantage, why are we doing it?

On their website, the Chicken Farmers of Ontario (CFO) explains it this way, “The Ontario chicken industry is currently transitioning to modular loading in a proactive response to heightened public expectations regarding animal welfare.”

The CFO does, however, address the need for some compensation: “Farmers are responsible for the cost of renovations to their barns. However, effective A-145, farmers will receive 1.2 cents per kilo in addition to the live price for a seven-year period as compensation. This is an interim amount that will be ‘trued up’ once a critical mass of barns have become modular loading compliant.”

In terms of labour, the human resources department at the plant will like modular handling. For processors, live receiving has to be one of the dirtiest jobs out there, Mack says. “It’s a revolving door as far as labour goes. Some people only last an hour.” At least with a modular gas stunning set up, somebody can have an easier job. Gas stunning has a few issues but has been said to be less stressful.

Labour may be one of the only paybacks though. “I don’t think I’ve heard a processor yet say there is payback in a modular loading system,” Mack says. After spending millions on plant improvements they may save a bit of labour on the receiving side and maybe a little on some grade performance but overall, no significant payback. There’s perception, though, that gas stunning is better, so there is payback on the investment “to satisfy the public; satisfy that we’re doing the right thing; and satisfy that we’re being the most humane.”