What are some factors that impact early mortality rates and overall chick quality? 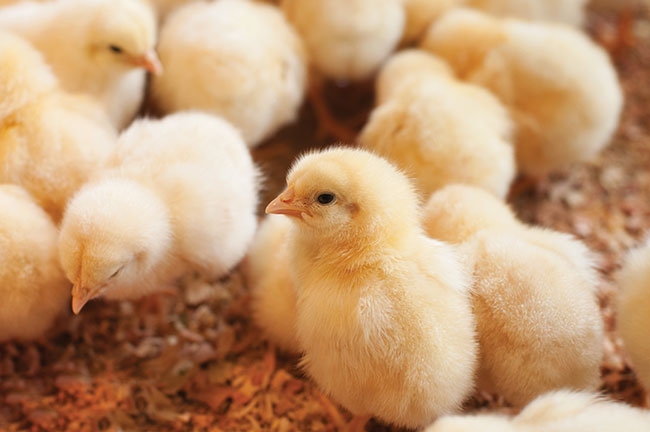 Ideally, total mortality at seven days of age is one per cent or less. Photo: Adobe Stock

Early mortality in a flock can have several causes or contributing factors. One of the most common reasons is a bacterial infection of the navel (omphalitis) or yolk sac. In this article, I discuss omphalitis and other factors that can impact early mortality rates and overall chick quality.

What is normal mortality?
Typical total mortality in a broiler flock will account for four to five per cent of the population over the course of five to six weeks. This number will vary slightly from one farm to the next depending on a number of factors. The majority of these losses often occur in the first week and, ideally, total mortality at seven days of age is one per cent or less.

The most common cause for first week losses, as mentioned above, is bacterial infection of the navel (omphalitis) or yolk sac. It is important to consider that mortality can also be due to starveouts, dehydration, contamination of hatchery administered vaccinations, improper incubation conditions, fungal infection, viral infection, nutritional deficiencies or toxicity. Environmental conditions, such as chilling, may also play a significant role in the mortality rate, regardless of what the initial cause is.

Despite appearances, the surface of an egg is unclean and there are numerous bacteria present. This is one of the reasons that hatching eggs are carefully graded upon arrival at the hatchery. Dirty eggs are removed, as are any eggs with evidence of shell defects or cracks. The reason for all of this work is to try and minimize the risk of bacterial infection and omphalitis 21 days down the road when the eggs hatch.

Until approximately 20 days of incubation, the yolk sac is outside of the chick’s body. But at 20 days of incubation the yolk sac should be mostly internalized and the navel should be in the process of closing. This is one of the reasons why the progress of chicks as they hatch is closely monitored. It is important that a hatch is not pulled too early, as too many birds will have open and unhealed navels at this point.

Significant efforts are made to maintain a high level of sanitation within a hatchery environment, as any open, unhealed navels are an invitation for omphalitis and infected yolk sacs to occur. Therefore, it is important for the hatching egg producer and the hatchery to work closely together to ensure the best quality hatching egg possible and to minimize the chances of omphalitis once the eggs hatch.

Unfortunately, there are cases where hatching egg contamination occurs. Or, there may be a breakdown in sanitation and the level of bacterial contamination overwhelms the control measures in place. In these instances, a percentage of chicks are exposed to a bacterial challenge and omphalitis can occur.

The most commonly isolated bacterial species is E. coli.

Other commonly isolated species include:

As one can see based on this information, a number of bacterial challenges are normally present. The prevention of omphalitis and infected yolk sac, therefore, relies heavily on the measures taken by the hatching egg producer and the hatchery to prevent overwhelming challenge and infection.

When increased bacterial challenge does occur, minimizing the outcome relies heavily on the conditions in the hatchery at hatch, preventative measures that can be taken around this time point and on the conditions the birds are placed in at the farm.

Excellent brooding conditions at placement can mean the difference between 1.5 per cent and greater than two per cent mortality during the first week. Any added stress that occurs during the first week (improper temperature/humidity, poor water quality, poor ventilation, poor access to feed, etc.) can further set the chick back, making the fight against infection and disease that much more of a challenge.

Treatment of early mortality
The first step taken in the treatment of early mortality should be an investigation into the underlying cause. While bacterial infections are generally the most common source, it should not be assumed that is the problem. In some cases, if flocks are affected with another condition, such as dehydration, some of the treatments used for bacterial infection can actually be toxic to a dehydrated bird.

Another factor to consider when determining treatment of early mortality is when to treat. Many cases of omphalitis/infected yolk sac are due to E. coli and mortality generally decreases by the time the flock is six to seven days of age.

In general, treatment for omphalitis/yolk sac infection is not recommended unless mortality persists beyond this period of time. This allows severely affected sick and lame birds, which will not respond to treatment, to be identified and culled from the flock.

A concern regarding early treatment is that the result may be that birds which should be culled are missed as the medication makes them ‘feel better’. However, these birds are unable to clear infection due to the nature of the initial challenge. In these cases, birds will temporarily improve only to relapse later in the cycle.

There are, of course, cases where early omphalitis challenge is so severe that early treatment is warranted. That’s why it is important to consider each case individually when discussing the decision to treat a flock.