Canadian poultry industry on guard as HPAI outbreaks spread across Europe and Asia. 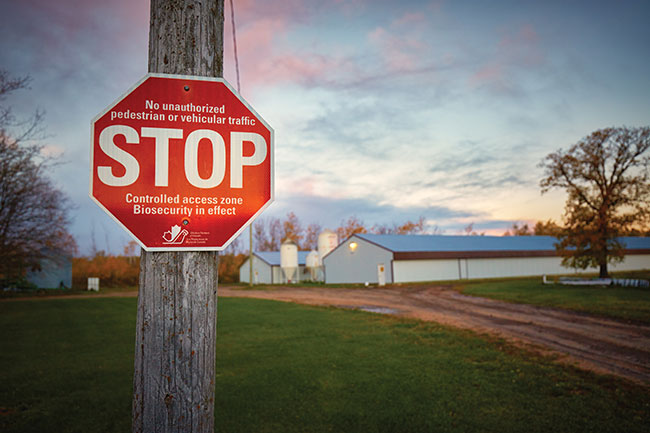 In recent months, the European poultry industry has been dealing with significant outbreaks of highly pathogenic avian influenza (HPAI). Outbreaks have also been recently reported across Asia and elsewhere. The Canadian poultry sector is watching closely. That’s because in 2014 and 2015 numerous AI outbreaks in Europe and Asia preceded infections on chicken farms, first in B.C. and then across Canada and North America.

“The main AI virus circulating is H5N8, although H5N5 and the potentially zoonotic (transmissible to humans) H5N1 have occasionally been found in these recent cases,” says Tom Baker, incident commander at the Feather Board Command Centre in Ontario. “Apparently, the virus found in Japan and Korea is more similar to the one that was circulating in early 2020 in Europe than to the current European strain. This means that there are two distinct H5N8 HPAI epidemics in eastern Asia and Europe.”

Right now, AI has been recently diagnosed in 19 European countries. In France, AI outbreaks since November have climbed to 264, resulting in the culling of 1.1 million birds, mostly in foie gras ducks in the Landes Region. Last week, authorities in Japan culled the country’s largest flock to be affected by HPAI at 1.1 million chickens.

Overall, Baker notes that from last fall to last January, more than 500 new cases of HPAI in domestic poultry have occurred globally. Approximately 35 million domesticated birds have either died from the disease or been culled.

“Farms across the globe are intensifying their biosecurity measures,” he observes. “Most countries with AI are depopulating infected flocks and creating surveillance zones and some are culling all birds within three kilometres. Everywhere, we have seen the value of robust wild bird surveillance systems in assessing risk to commercial flocks. The typical scenario we are seeing around the world is first detection in wild birds, then free-range and backyard flocks and then commercial flock outbreaks.”

B.C. Chicken Marketing Board director Ray Nickel, who is also the information officer for the B.C. Poultry Association Emergency Operations Centre (BCPA-EOC), explains that during a yellow alert, restrictions are in place such as farm gates staying closed at all times (except when a vehicle must pass through). If a case of HPAI is suspected in B.C., the province will move to red status. “It’s a significant step up where we go into a complete lockdown,” Nickel says.

“We lock our gates at all times. We inform all allied trades and others associated with the farm that we are in a state of enhanced biosecurity. We implement a vehicle wash station where we must remove all organic debris with a pressure washer. We also must disinfect tires, wheel wells, undercarriage of vehicles, floor mats, pedals, steering wheel and door handles. In addition, we make sure garbage bins and dumpers are moved outside of the controlled access zone and reduce pickups as much as possible.”

Nickel adds that there has been a mandatory biosecurity program in place in B.C. since 2006 and producers have continuously demonstrated strong commitment to it. EOC section chiefs meet monthly with the B.C. Ministry of Agriculture and Canadian Food Inspection Agency (CFIA) officials and preparations have been made, due to the COVID-19 pandemic, to create a virtual incident command centre that will be used if needed. BCPA has also developed an emergency response plan in reaction to past AI outbreaks.

BCPA chair Steve Heppel says the EOC and the rapid response committee have also been working together with the B.C. Ministry of Agriculture and CFIA to develop procedures and teams. And right now, all procedures must be modified to meet pandemic restrictions. He adds that a rapid and coordinated approach to containing AI is dependent upon poultry producers, allied trade and association staff being able to participate in the process.

“We’ve been advised by several health experts that our involvement in an AI outbreak will hinge upon individual producers having gotten their annual flu shot,” he says. So, in October, the BCPA urged all B.C. poultry producers and their families to get the shot (free of charge for this group) so that they can work if necessary on an AI rapid-response team. These teams, which can help with euthanasia, surveillance and more, are under CFIA jurisdiction and all members must have the shot – and immunity is only achieved two weeks afterwards.

Vet perspective
Neil Ambrose, director of veterinary services at Sunrise Farms (which has operations in Alberta, B.C., Manitoba and Ontario), believes that the security of barns is critical for the prevention of AI outbreaks in Canada. “My rule is that what is inside the barn stays inside and what’s outside hopefully stays there,” he says. “We should not allow poultry outside unprotected at this time of year. If birds must [be outside], they should be in protected, covered and secure areas only.”

Ambrose adds, “B.C. has a separate audited biosecurity program for the regulated poultry sector. This is a good addition to national agency programs, as it just heightens awareness of biosecurity adherence.”

While Ambrose feels Canada’s poultry industry has “definitely come a long way from the dark days of 2004” in terms of AI emergency planning and knowledge, he thinks there should be more focus on prevention – on watching migratory wild birds, for example, who are the primary transmitters of the virus.

“We should be closely monitoring the movements of these birds and where they overwinter,” he says. “To me, this is a big red flag and what I watch for in the Fraser Valley each fall/winter. If I see thousands and thousands of wild birds sitting in a corn stubble field, that’s a concern.”

In Ambrose’s view, the poultry sectors should also work more closely with the dairy and crop farming sector to encourage or require corn stubble fields to be ploughed under or reseeded with ground cover as soon as the fall crop is harvested. “Birds flying overhead look to places to feed and rest,” he asserts. “If we make the environment less welcoming for them to stop next to our poultry barns, surely this would help.”

“In addition, what may have historically been open-sided barns such as those seen in the turkey sector are now enclosed with screens or netting,” Ambrose says. “Also, the planting of trees around air intake vents acts as a natural filter and a windbreak when barns are exposed to the likelihood of wind transmission.”