Avian influenza and your water

Once inside the water line, a virus can survive for weeks. 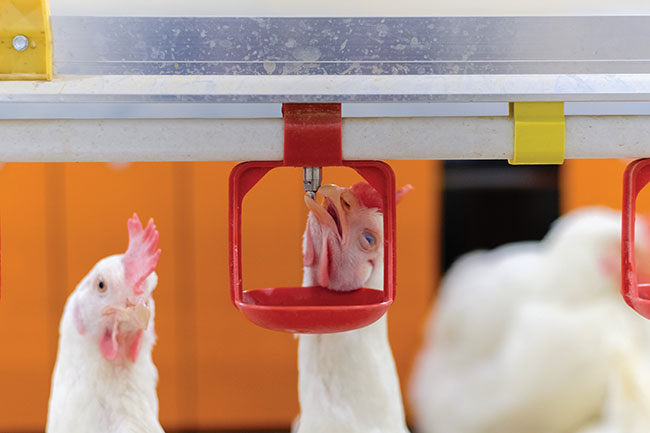 The dreaded headlines are back. We have all been put on high alert for avian influenza – again. Many of us remember the 2015 outbreak where we were all reminded and/or taught what to do, and not do when highly pathogenic avian influenza virus (HPAIV) is detected in our area or even in our own flock.

Every meeting had the “biosecurity talk” the “notification talk” the “cleaning and disinfecting talk” – all valuable points of discussion and information. We did not see much of the inclusion of the water system in these discussions at that time. I’m not talking about the water source – pulling from surface water is a huge no-no when you have migratory birds infected with HPAIV in a flyway over your farm – I’m talking about the water system in your barn.

My company was asked to be a consultant for a grower that had been hit by avian influenza at that time. They were wanting to make sure they had done all they could before placing birds again even though they had been cleared for placement and were just waiting out the days they had to be on “hold”.

Before we were involved, a contracted, trained cleaning crew had come into the barns to do the final cleaning and disinfecting. This group had submitted their plan to the appropriate government entity and it had been approved. The working crew was well trained in biosecurity issues. They wore biohazard suits and cleaned everything in the barn beginning with the removal of organics, then wash-down with a cleaning agent and, in the final steps, they sprayed everything from the ceiling to the baseboards with a disinfectant.

Government officials had to approve the process and were involved in the concluding inspection. When all was said and done the grower was presented a list for his records of all that had been cleaned and disinfected. Two pages of single line items had been cleaned, removed, and/or disinfected. Guess what was not on that list? The inside of the water line.

This becomes an especially important point with the H5N1 subtype we are facing again this year. Different subtypes of viruses have different types of shedding patterns. For example, the H9N2 subtype typically can be detected in fecal droppings or cloacal swabs but is not often detected when only tracheal swabs are done.

The opposite is true of the H5N1 subtype. Because this virus survives well in the trachea there is a higher possibility that it will be found in the drinking water. Keep in mind that the water system is not a closed system. Every time a bird triggers a drinker, they open the system – and they leave whatever was on their beak on the drinker. Anything that is in that barn, be it a mold spore or a bacterium or a virus, can wind up inside the water line. Once inside the water line, a virus can survive for days or weeks.

Don’t forget the water system when the discussion turns to biosecurity, keeping the barn clean, or recovery from a disease event. It could be the one place that is harboring the enemy.