The housing system choice is as individual as the producer. 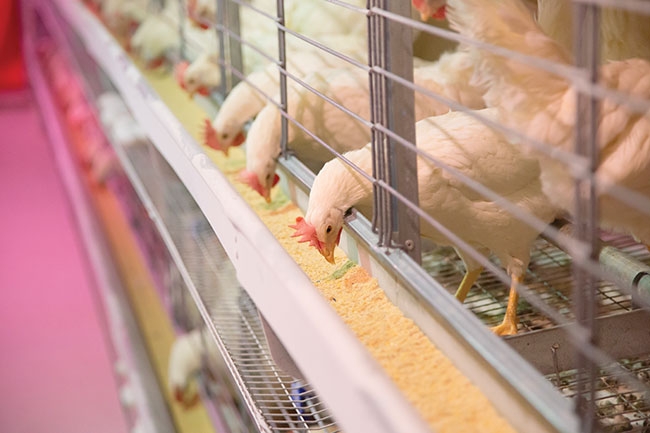 “If I had to be a chicken, 100 per cent I’d want to be in an enriched system.” photo credit: Big Dutchman

Across the country, egg producers looking to comply with the phase-out of conventional layer housing are facing a big decision of whether to invest in aviary or enriched housing. For many producers, the choice is challenging: not only do both systems provide management benefits and drawbacks, the single most critical factor – future consumer demand – remains a huge wildcard.

“I don’t think anyone has as a crystal ball on what the future will hold,” says Amy Carter, general manager of Clark Ag Systems, which distributes Farmer Automatic and Tecno layer housing systems across Canada. “In Europe, they’ve gone predominantly cage-free but the consumer demand in Canada is just not there.

“I think there are many producers holding tight right now (rather than investing in new housing) because over the last year it changed. We saw a lot of cage-free barns going up a year ago and now we are seeing the demand swing to enriched systems instead.”

Part of the decision comes down to dollars and cents, as cage-free eggs capture approximately 15 cents more per dozen than their conventionally caged equivalent, so long as a producer can find a market that will take them.

“If the egg farmers can get a premium for cage-free eggs, they will go most likely for a cage-free system, even If the aviary equipment is more expensive and the management is more time-consuming,” says Andreas Moors, area sales manager for Hellmann Poultry. “At the end, it will pay off.”

Certain market indicators suggest cage-free eggs are simply a matter of ‘when’, not ‘if’. Germany recently legislated cage-free for 100 per cent of its egg production. Many other European countries produce primarily cage-free eggs. Though North America tends to trend behind Europe in welfare regulations, major companies here have been on board for the past couple years.

However, consumers’ willingness to pay a premium on cage-free eggs has so far failed to gain the traction industry expected, leaving many egg producers uncertain of next steps and causing sales of aviary systems to slow. And, adds Ron Wardrop, Canadian sales manager with Big Dutchman, “there is added production cost (to cage-free production) so most people are leaning away from cage-free systems.”

Clark Ag Systems’ president Brad Mandryk foresaw that consumers wouldn’t be as ready to commit to change as the major companies. “It didn’t surprise me at all. A lot of the large producers in the U.S. are really slowing the process of converting solely towards the cage-free concept.

“Even the egg board was cautiously concerned about where demand was going to go. It was the special interest groups pushing cage-free eggs and, though people are becoming much more conscious about animal welfare, it comes down to price. The consumer is not necessarily willing to pay for cage-free in the grocery store.”

Future marketability
Of course, current demand is just one factor. With layer systems typically lasting 20 or 25 years, installing a system that meets future consumer demands is as important as installing something that best suits today’s needs. Though the new Code of Practice for the Care and Handling of Pullets and Laying Hens supports enriched cages, the future of this housing system may be uncertain as activists lobby to ban any form of cage.

“You have to ask: If I put in an enriched system, is demand going to hold for 20 years or is everything going to shift to cage-free systems?” Carter says.

Hellmann’s Moors agrees. “Even if the farmer has today no benefits with having an aviary system, they seem to be better prepared for the future, as changes to the existing rules and stricter regulations can suddenly come up. That means farmers will be on a safer side with a cage-free system.”

If regulation were to outlaw even enriched cages tomorrow, experts say existing cages would likely be grandfathered for some years, just as conventional cages were when the most recent code of practice was released. However, market demand is fickle: Should the market change, unpopular raising systems could produce unmarketable eggs even if those eggs meet regulations.

“We know markets can change very quick. We have experienced a complete changeover in Europe and especially in Germany, where it’s almost 100 per cent impossible to buy cage eggs in a supermarket,” Moors adds.

The shift is even evident in unexpected parts of the world: Moors says Hellmann is now even getting requests for aviary systems from companies operating in countries with virtually non-existent animal welfare regulations.

Other perks and drawbacks
Aside from marketability, farmers should consider several other key factors when deciding whether to implement an aviary or enriched housing system. Cage-free and enriched housing systems both offer productivity when managed properly. However, proper management is different when hens are confined to cages rather than allowed to roam. A cage-free system will not suit farmers who prefer automation and simplicity over hands-on management.

“Some customers, when they see pictures of aviaries, they say: ‘No way will I ever do that system,’” Moors says. “If they are used to cages for 40 years and then they see a house with all the birds flying everywhere, they think it’s too much work. But others are pioneers who really look forward to doing it. They want the system even if they’re not forced to do so. They’d do it even if there was no market premium.”

Hens destined for cage-free systems must be raised in aviary-style pullet barns in order to learn to move through the system, jump to perches, find feed and water, and co-exist within a very large flock. Helping them learn to opt for nest boxes for laying is a time-consuming, labour-intensive process, notes one producer.

“You need to teach them how to move so in the morning when you turn the lights on, the birds are in the system and near the nest instead of on the floor,” says David Lefebvre, professional engineer, director of operations for Ferme St-Ours Inc., and proud seventh generation on the family farm.

Teaching layers starts in the pullet barn where, for about 30 days after opening the aviary system, staff must go through the barn each night, lifting pullets off the floor and placing them into the system. In a 20,000-bird pullet barn, Lefebvre says he would expect to lift hundreds of birds every night the first week after opening the system. Once birds move over to the layer barn, he’d expect just a few layers would need to be lifted into the system each night for the first week.

Operating a cage-free system is more costly than enriched housing in terms of infrastructure costs, not only because the same square footage can house fewer birds but also because the system requires more intensive air control and management infrastructure compared to an enriched system. As well, because pullets destined for aviary systems need to be raised in aviary-style pullet barns, the additional costs begin even before laying begins.

While airflow is important in any system, effective and efficient heating and ventilation systems are critical in an aviary. Manure becomes part of the ground litter rather than being regularly removed, so drying and cleaning the air fundamentally impacts bird health and productivity.

Management and costs aside, many egg producers spend significant time analyzing which system will provide better welfare and comfort for their laying flock.

Big Dutchman’s Wardrop argues that cage-free does not necessarily mean a better existence. “If you really care about the welfare of the bird, enriched is better. The regulations for enriched cages were drawn up very scientifically instead of emotionally. The government and associations did a really good job of taking the welfare of the bird into the whole concept. If I had to be a chicken, 100 per cent I’d want to be in an enriched system.”

“I do really like the atmosphere you have in (cage-free) barns. It seems like you enter into the world of the birds; it’s really special. But an enriched system also perfectly responds to the layers’ needs,” he says.

Do your homework
Farmers ask Clark’s Carter virtually every day which system she’d install if she were choosing between caged and cage-free.

It’s a question she simply can’t answer. “Farmers are really doing their homework on what it takes to run enriched versus cage-free,” she notes. “A lot of farmers have crops and other demands on their farms so that has to be considered. And, talk to your grader and see where demand is coming from. Ultimately, it is a family decision on which system you choose.”