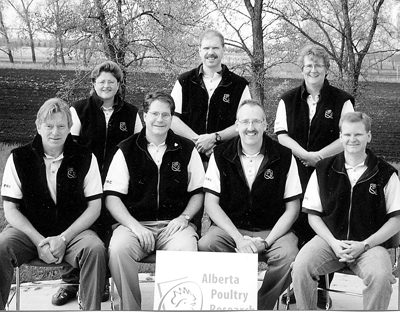 To qualify, the teaching unit must have been in existence for at least three years. It may work at the graduate or undergraduate level and may include some or all members of a faculty, school, department or division, or may be an interdisciplinary team. Students taught by such a teaching unit must be able to identify results that they were taught by a group of instructors and not just a series of individuals.

The University of Alberta’s poultry group is made up of Dr. Gaylene Fasenko, Dr. John Feddes, Dr. Douglas Korver, Dr. Lynn McMullen, Dr. Robert Renema, Dr. Frank Robinson and Martin Zuidhof. To reflect their involvement with poultry, they are often referred to as the “Coop of Seven”.

with Alberta Agriculture, Food and Rural Development, who is working towards his PhD on bio-economic computer modelling of the broiler chicken supply chain. Details about the courses they teach, complete with colour graphics can be downloaded from the website: www.agric.gov.ab. ca/aprc/award.pdf.

In early 2000, the University of Alberta’s Student’s Union recognized three faculty members for their undergraduate teaching and mentorship skills. Two of the three—Professor Frank Robinson and Assistant Professor Doug Korver—were from the Poultry Group, which Dr. Ian Morrison, the Dean of the Faculty of Agriculture, Forestry, and Home Economics described as, “A group of enthusiastic, committed and innovative educators who I take great pleasure in nominating for the ‘Teaching Unit Award’.”

The Coop of Seven’s award nomination also included letters of support from the provincial Department of Agriculture, Food And Rural Development, graduate and undergraduate students. It also listed the awards and certificates of excellence earned by those who had completed the Poultry Group’s courses.

Those letters of support included phrases such as, “awesome course,” “the highlight of my university career,” “unbelievable assistance,” “unprecedented enthusiasm,” “impressive team… committed faculty,” and “the entire Poultry Group is without peer.”

The Unit Teaching Award carries with it a monetary prize of $3,500. It is indicative of the broad support that the Poultry Group has earned over the years that this amount has been matched twice–by Alberta’s poultry industry (the chicken, egg, hatching egg and turkey producer associations) and by the Depart-ment of Agricultural, Food and Nutritional Science at the University of Alberta.

The Poultry Group has announced that these funds will be used to enhance their creative teaching efforts in the poultry area.