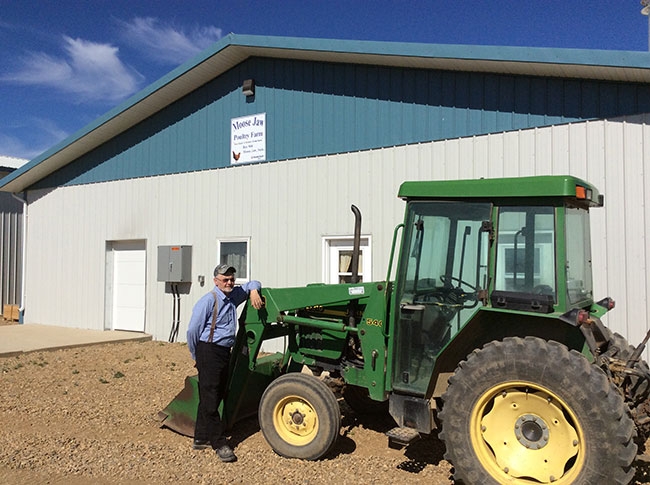 As we say goodbye to 2017 this December, Baildon Hutterite Colony in Saskatchewan will begin shipping out the first organic eggs produced in the province. It will be an achievement that is the culmination of much research, discussion and planning.

Baildon Colony was established in 1967 and is located just south of Moose Jaw, Sask. Colony members currently farm about 19,000 acres in a continuous rotation of wheat, barley, canola, lentils, chickpeas, peas and soybeans. “Our land is a little bit rolling, but some of it is very flat as we are near the Regina Plains,” notes layer manager Paul Wipf. “Some of our cereal crops are used for our livestock, as we have a large hog operation, dairy, layers and also some turkeys.” Feed-grade grain goes for that purpose, with additional feed grain purchased as needed, and higher quality grain is sold.

Free-run transition
When the colony started in 1967, members built a barn for 7,000 layers and maintained that number of hens until 1983, when another Hutterite colony was established in the province. At that point, colony members bought a 20,000-layer farm and split the quota in half so, in total, each colony had about 12,000 birds.

“All the hens were housed in conventional cages at the time as this was the going trend,” Wipf explains. “However, in 2009 we decided we needed to build a new pullet barn as our existing one was not big enough to produce all the pullets for our layer operation, and we decided to completely rebuild the layer barns too. The question was what kind of a layer barn do we build, as the growing concern was about whether conventional cages will be good enough in the future.”

To answer this question, Wipf approached Star Egg in Saskatoon to see if they were in need of free-run eggs to fill provincial demand. The company told him there was only one small free-run producer and that, yes, free-run eggs were sometimes in short supply. After a lengthy discussion, all the colony members agreed to pursue the challenge. They also decided that they would convert the old layer barn to a free-run pullet barn, and selected Hellman Poultry for the equipment needed for this and the new layer barn.

Then, in 2016, Star Egg approached Baildon to ask if the colony would be interested in turning half their free-run barn into organic production. There was no commercial organic egg producer in the province and demand was growing.

“Again, after a lengthy discussion, we decided rather than convert half our barn that we would build a completely different barn, as we had some layer quota that we were having to lease out anyway,” Wipf recalls. “This January we started talking with Pro-Cert, an organic certification company out of Saskatoon, to find out what was involved to produce organic eggs and built the organic barn accordingly.”

The heating system is a hot water delta tube design from Europe, which Wipf believes should be both very efficient and also easy to clean. The ventilation system is Hotraco from Holland, chosen because the colony already has this in the layer barn and it is working very well.

The lighting, however, is different. Baildon went with LED lighting for the organic building because of the higher energy efficiency it provides and also because the LED fixtures are placed on the ceiling. What’s more, chickens sometimes break fixtures that hang down by flying against them.

Barn design and placement aside, the colony also had to answer the question of where the organic layer feed would be sourced. The answer was considered in light of the fact that this spring, Baildon had also decided to replace its existing centralized hammer mill used to grind feed for the hogs, dairy cattle, turkeys and layers.

“It had always served the colony well, but we felt it was time to change over to a disc grinder mill, as they are now more common,” Wipf explains. “The organic regulations would have allowed us to use the new mill for both organic and regular feed, but we would have had to flush the system every time we switched from one type to another, so we decided we will produce organic feed with our old hammer mill. It’s still in good-enough shape, and we’ll be making our organic layer feed with purchased organic grains.”

Baildon will achieve organic certification in January 2018. The colony members had gone into the January meeting with Pro-Cert with plans to have their first organic egg layer pullets arrive in early May. However, Pro-Cert informed them of a new organic regulation that had come into effect in December 2016. The new rule requires that the free-range pasture attached to the organic layer barn be monitored for a year before certification is granted. Wipf says it was a bit disappointing to learn about this new regulation, but there is nothing that can be done to speed things up.

In terms of the biggest challenge facing egg producers today, Wipf names hen housing. “The egg producers here in Canada will have to spend a lot of money in the next 15 years to change from conventional cages to enriched housing,” he notes. “However, the system has been good to us in the last 30 years, so it makes it a lot easier to accept that change.”

Once organic egg production is rolling in 2018, the colony will look at its degree of success and consider expanding and growing organic feed grain in the future.