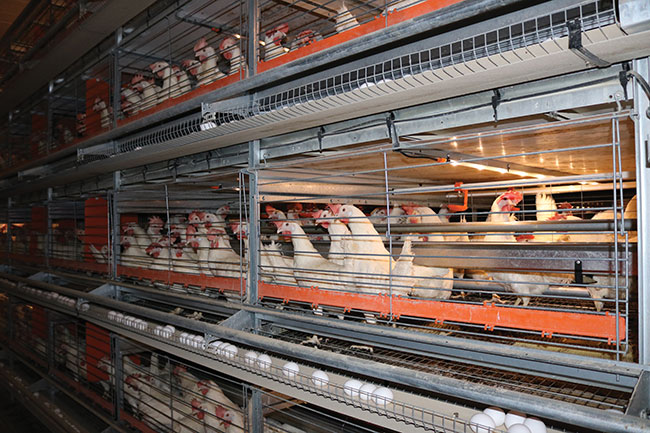 The in-cage lighting allows the Fehrs to adjust the brightness in each colony and, thus, manage where the birds go in the system. Photo: Fehr Venture Farm

The business
The Fehrs have been producing eggs since the early 1970s. That’s when Stan and wife Marie forged a partnership with Stan’s parents. Fast-forward nearly five decades and the couple now has a succession plan in place, with the next generation playing a more active role on the farm.

The need
The family decided to build a new layer barn for two reasons. For one, they were running out of room to fit their growing flock. Secondly, they needed to transition away from conventional housing to comply with the latest code for layers. 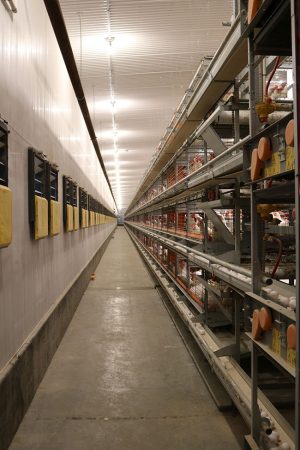 The barn uses modified tunnel ventilation, which includes sidewall inlets with tunnel fans at the back.
Photo: Fehr Venture Farm

The barn
They chose to install an enriched system from Big Dutchman. For Stan, the decision of whether to go with enriched or cage-free was an obvious one. “I grew up with floor birds and don’t really see the benefit of it compared to something in a cage system, be it for animal welfare or other poultry husbandry aspects,” he says. And they went with the Big Dutchman system because while it had similar square footage to others they looked at, they felt the layout would feel more spacious for their birds. They also liked the in-cage lighting. “You can control the lighting where it matters most, in my opinion, which is in the system,” says Tyler Wiens, Stan’s son-in-law who played a leading role in the new barn build.