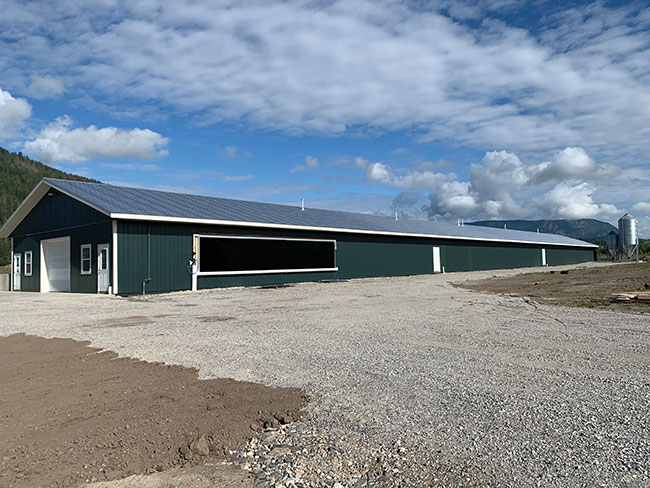 To combat the summer heat, the barn includes evaporative cooling pads, which work by evaporating water to cool the inside of the poultry house. PHOTO CREDIT: Noble Farms.

The business
For 20 years, Ray and Melanie Baylis have managed chicken farms for absentee owners. Dubbed Worksinmotion Consulting, they have three full-time employees. They also own a broiler operation that they opened last year called Noble Farms.

The need
The couple long dreamt of opening their own chicken farm. In 2018, they got that opportunity. That year, they won the new entrant lottery and quickly began planning their own farm using the years of knowledge they’d gained overseeing the construction of three new barns for their clients. “When it came time to build our own barn, I had a very good idea of exactly what I wanted to do,” Ray Baylis says. 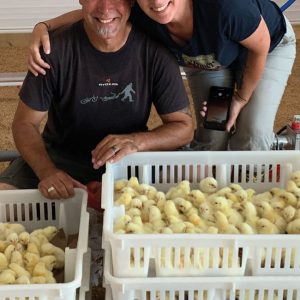 After 20 years of managing other people’s farms, Ray and Melanie Baylis opened their own broiler farm last year. 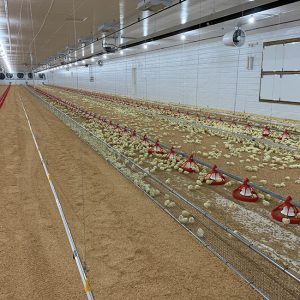 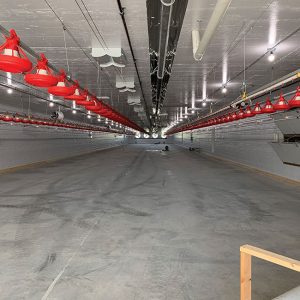 The producers went with tunnel ventilation using SKOV BlueFans, which are 55-inch variable speed fans that gradually turn on and, thus, don’t startle the birds like traditional on/off fans do.

The barn
The producers knew from the start that they wanted to go with insulated concrete forms (ICF) instead of the more traditional stick frame building. The approach appealed to them because they thought a well-sealed barn would be more energy efficient, deliver better protection against pests and allow for more control over airflow. The barn opened last August. A few flocks in, they say it’s performing even better than they’d anticipated. The producers say the insulation value of the facility is around R16 or R18 – whereas the value of a traditionally built barn would be around R10. “I figure my utility bill is probably a good 20 per cent less than a regular stick frame building,” Baylis says.