The “Fly Girl” is studying natural alternatives for fly control 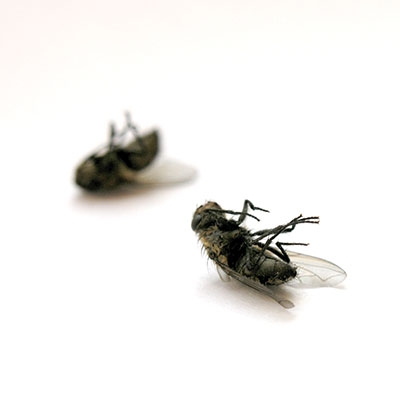 A University of Guelph student, known as the “Fly Girl,” is comparing several naturally occurring products to control populations of the house fly in poultry barns

Justine Shiell has worked hard for her nickname. Studying fly control in poultry barns has become her specialty as she works towards her Master’s degree at the University of Guelph.

What exactly is it about flies that have captured this researcher’s attention?

Flies are a nuisance and not just to poultry. They annoy farm workers and can disperse from barns to neighbouring houses and businesses where health concerns can even lead to legal challenges. Inside the barns, flies can spread filth and disease, reduce feed efficiency and increase production costs. Chemical control has led to resistance concerns.

When combined with other poultry pests such as darkling beetles, a 1994 U.S. estimate puts the cost of pesticides at $.07 per bird, exclusive of labour costs and other fly management efforts.

At a duck barn in Beamsville, deep in the heart of the populated communities of the Niagara Region of Ontario, Shiell is testing the use of various control methods on the fly population. While manure management and pesticides are commonly used to control flies, her research is comparing several natural alternatives that may offer other management tools in the fly fight.

Poultry manure provides a suitable environment for flies to reproduce. The fly life cycle can be as short as ten days in warm temperature; each female can lay 500 eggs in manure or other decaying material where the maggots feed through their larval stages and become pupae, emerging as adults about 4-5 days later. With ten to 12 generations per year in poultry barns, Shiell told delegates at the 2014 Poultry Industry Council Research Symposium in Guelph, Ont., the population increases can be exponential.

Her preliminary work has so far compared the use of naturally occurring products such as boric acid, acetic acid, diatomaceous earth and hydrated lime in laboratory and field tests to control populations of the house fly Musca domestica, the most abundant and annoying fly species in poultry facilities.

In the laboratory, preliminary results point to significantly lower adult fly emergence rates for duck manure treated with two concentrations (1.9 and 4.7 per cent) of acetic acid (vinegar) and boric acid. However, the treated manure didn’t deter the flies from landing or laying eggs. Shiell postulated that the results may be due to a lower pH stimulated by the acetic acid while boric acid can act as a stomach poison to maggots.

Many unanswered questions have emerged as her work continues: does the manure treatment have any environmental impact? Is there any impact of the treatment on the bird’s feet or meat? Will the treatment be economically feasible?

Meanwhile, the Fly Girl’s work will continue to investigate control methods both in the laboratory and the barn through the fall of 2014. At the same Beamsville duck farm, Shiell plans to use infrared technology to look for patterns of fly density in manure of different temperature and moisture levels in this floor-reared, litter-based production system. Do flies prefer to lay their eggs under water lines? Under feeders? We should know those answers later this year.