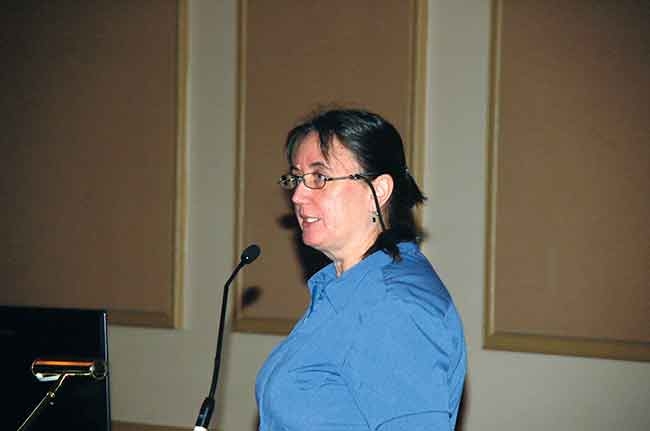 BCMA avian pathologist Vicki Bowes said B.C.’s experience with its 2014-15 AI outbreak is “much different” than in 2004. She was awarded the first B.C. Excellence in Poultry Service and Leadership Award on behalf of a grateful industry at the symposium.

Because AI originates in wild waterfowl, BCMA environmental epidemiologist Michelle Coombe says the BCMA has started collecting and testing “pond scum” in wild waterfowl resting areas to determine the presence of AI. The hope is the environmental sampling can be used “as an early warning system for both poultry and human health,” she told the first annual B.C. poultry symposium, held May 27th in Abbotsford.

Since AI is shed in wild duck feces, testing the droppings is bound to be more efficient than waiting for dead wild birds to show up at the BCMA animal health lab.

“The results will tell us what strains are present in the environment and how prevalent they are,” Coombe said, adding the test results would be used to give industry green, yellow or red alerts similar to what is done during forest fire season.

BCMA avian pathologist Vicki Bowes said BC’s experience with its 2014-15 AI outbreak is “much different” than in 2004. “We had a very successful disease containment result.”

AI was detected on only 11 commercial premises and two backyard flocks in the Fraser Valley, leading to the destruction of less than 250,000 birds. The 2004 outbreak was only contained through a mass depopulation of over 18 million birds.

“Considering the density (of the Fraser Valley poultry industry), this is an incredible success story,” Bowes said. “The initial producers did what was right.”

Dr. Stewart Ritchie of Canadian Poultry Consultants, the symposium’s chief organizers, acknowledged both the lab and Bowes’ own considerable contributions by giving her the first “B.C. Excellence in Poultry Service and Leadership Award” on behalf of a grateful industry.

While B.C. has learned the value of and benefitted from good biosecurity practices, American producers did not appear to heed those lessons.

“The United States is definitely a mess,” said COBB Vantress technical services manager Shawn Carlton of Arkansas. “We have already lost eight per cent of our total egg production.”

Between December and June, AI had been confirmed on over 200 commercial and backyard flocks in 15 US states, leading to the destruction of close to 50,000,000 birds. Almost 80 per cent of the cases were in Minnesota and Iowa, part of the Mississippi flyway. Only 10 were in the Pacific Flyway (which stretches from California to Alaska).

The best way to manage AI and other crippling diseases is to keep them out of a poultry flock in the first place, and that takes excellent biosecurity. Carlton says no one takes that more seriously than Cobb. As one of the world’s main producers of poultry breeding stock, their birds are among the most valuable in the world.

The first line of defense is to distance a flock from other producers. While that is difficult, if not impossible, to do in the Fraser Valley and many other poultry-dense production areas, Cobb has done that by locating its Oklahoma breeding facility on 500 acres in the middle of a 3,600-acre farm. It then restricts all movement on and off the facility and requires all workers to wear protective clothing and footwear and shower in and out of each barn.

“My record is 13 showers in one day,” Carlton said.

While AI dominated the symposium, several speakers touched on other diseases, such as Marek’s disease and IBD (infectious bursal disease), which may not spread as quickly as AI but can also devastate individual flocks.

Marek’s usually shows up when birds are about 13 weeks of age. During the 20 weeks it takes the flock to build up enough resistance to fight off the disease, it can cause reduced performance and up to 50 per cent mortality, says Hyline Chicks technical services veterinarian Dr. Danielle Botting of Iowa.

IBD generally infects younger chicks. It has variable mortality, increases the bird’s susceptibility to other diseases and may even lead to Marek’s. Botting recommends vaccinating birds for Marek’s on the day of hatch and for IBD at 18, 24 and 30 days of age using a live vaccine.

She stressed the need to use good vaccination practices as poor vaccination is sometimes worse than no vaccination at all. In a poorly vaccinated flock, a disease could nestle in unvaccinated birds and build up resistance to the vaccinations. She also strongly recommended thorough cleaning and disinfecting (C&D) and 4-6 weeks of downtime between flocks.

“We can’t reiterate how important C&D is,” Botting said, stressing a barn should be washed and dried before a disinfectant is used.

Saying a barn has accumulated three million units of debris/square inch by the end of a flock, Merial Canada technical services vet Dr. Louis Coulombe of Quebec detailed the effectiveness of various C&D options. Blowing the barn down with air only reduces debris by 3.4%. Airing it out drops it down by 31%. Washing with water and detergent reduces the debris count to 100,000 while finishing up with a disinfectant drops the number below 1,000.

He recommends using a gel detergent, saying it does not drip like a foam detergent, can be left on the walls longer and is easy to rinse off. He also urges growers to use a product like CID 2000 to clean and disinfect the drinking water pipeline.

While University of Arkansas poultry science extension specialist Dr. Susan Watkins also advocates the use of CID 2000 between flocks, she said it should not stop there. She urged growers to add 25-50 ppm of hydrogen peroxide to their water lines as a daily cleaner.

“Poultry water systems are perfect for growing bugs,” she said.

Instead of just using antibiotics, also known as anti-microbials, (AM’s) to treat diseases when they occur, many poultry producers have been relying on them to prevent disease outbreaks and/or boost bird performance.

“We use more antibiotics in Canada than in the US,” asserted Jan Breckman of JEFO Nutrition.

However, that will change as jurisdictions outlaw their use in order to stave off building resistance to those antibiotics in humans and food processors and retailers, such as Pilgrim and Tyson Foods in the US and A&W in Canada respond to consumer concerns by promoting antibiotic free chicken.

“A&W says their current no hormones and no antibiotics campaign is their most successful ever,” Breckman noted.

Even though Saskatchewan epidemiological consultant Dr. Leigh Rosengren said it is “unfair” to point at agriculture for all of society’s ills, noting only three of the 17 resistant infections in humans are food-borne related, she said producers must “reduce your reliance on AM’s so we can retain their use in animals.”

Her list of ways to reduce AM usage includes preventing infections in the first place through good biosecurity, good hygiene and reduced stocking density and increasing disease surveillance to permit early detection.

She urged producers to work closely with their vets to “know what you’re treating, what you’re using and why,” and to support the Canadian Poultry Research Council’s research into alternatives.

Finally, she said producers must step up their communication with and education of consumers.

“Let’s find out what the public thinks or knows and talk about how and why we are using those products.”