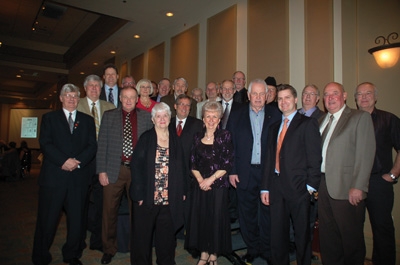 Those in attendance who had served on the BCCMB board over the last 50 years were asked to come on stage for a group photo.

It has now been 50 years since regulated marketing began in the Canadian chicken industry. In March, several hundred people gathered in Abbotsford, B.C., to celebrate the 50th anniversary of the B.C. Chicken Marketing Board (BCCMB), which until 1980 was known as the B.C. Broiler Marketing Board.

Although it was the first meat poultry board in Canada, it was not the first case of regulated marketing in the province, having been preceded by both the B.C. Milk Board and the B.C. Egg Marketing Board.

A host of dignitaries congratulated the BCCMB on its accomplishments, including retiring Chicken Farmers of Canada (CFC) chair David Fuller and Sen. Gerry St. Germain, a former chicken grower and BCCMB chair.

“The chicken marketing board has always had a special place in my heart,” St. Germain said, insisting it has done a “world of good” for the industry.

“You set a high bar for the rest of us,” Fuller added.

Current BCCMB board member and new CFC chair David Janzen spent most of the evening recounting highlights of the board’s history, beginning with the first board of chair Bob Blair and members Ken Nelson and Bill Vanden Born. They noted how far the industry has come since the BCCMB issued its first pricing order on Dec. 28, 1961, setting the live price at 18.5 cents/pound (40 cents/kilogram). At $1.63333/kilogram, the current price is more than four times that. Production has increased even more dramatically. B.C. now grows about 150 million kilograms/year, an increase of over 1,000 per cent from 1961.

Although the board was formed to smooth out production and increase returns to growers, it has had a checkered history.  Despite and sometimes because of its own efforts, history shows the board and the industry has had a series of ups and downs on both the provincial and the national level over the past 50 years.

As early as 1965, the B.C. board indicated a willingness to co-operate with other provinces in implementing regulated pricing and production but stated it would be just as prepared “to compete where competition has been offered.”

The dramatic production increase has not been an orderly climb. The board was forced to make its first quota cut in 1967 when “too many broilers were produced to maintain a stable and profitable market demand.”

This also caused the processors of the day to form an advisory committee to the board to improve relations between growers and processors. Like the industry as a whole, that relationship has been up and down ever since.

By 1972, all provinces had instituted their own marketing boards but this was not enough to manage interprovincial movement of chicken. Although B.C. had initially floated the idea of a national chicken plan to deal with the issue, it ended up opposing the proposed plan, saying it did not adequately address market growth within a province.

After years of discussion, the Canadian Chicken Marketing Agency (CCMA – now CFC) was proclaimed on Dec. 29, 1978. B.C. was an original member but withdrew in 1990 to protest what it felt were insufficient quota allocations.

Almost immediately thereafter, the BCCMB agreed to co-operate with the CCMA. By 1994, old wounds had healed and growers voted overwhelmingly in favour of rejoining the national agency. However, that was stymied by the B.C. government and it was not until 2001 that B.C. actually re-entered the national system.

Although the BCCMB had been an elected grower board since its inception, that ended in 2000. As a result of another period of friction between growers and processors, the B.C. government decided to terminate the five-person elected board and replace it with a three-person appointed board. While it has maintained three appointees, including an appointed independent chair, the government has since added two elected grower positions, bringing the board back to a complement of five members. One of the appointed positions is currently vacant.

Current CFC chair David Janzen is the third B.C. grower to serve in that capacity. He was preceded on the national stage by Bruce McAninch and Arne Mykle.

He faces some difficult tasks, as processors in B.C., like their counterparts in Alberta and Ontario, want more production despite the fact there is only marginal growth in Canadian chicken demand.

That was reaffirmed by two of B.C.’s three major processors.

Superior Poultry could soon also be requesting more chicken. It has embarked on a $7-million expansion that will result in a 35 per cent increase in the capacity of its Coquitlam processing plant.