Features Barn Management Production
Be Air-Aware: The impact of ammonia

Understanding how the gas is formed, its impacts and what can be done to manage it. 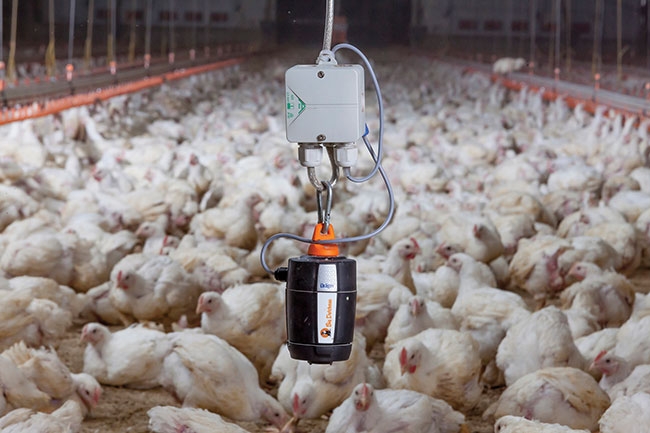 Ammonia sensors are more sensitive and, thus, more accurate than relying on smell alone to detect the gas. photo courtesy of Big Dutchman

One of the biggest complaints surrounding the poultry barn – apart from flies – is the smell of the manure. The excessive amount of ammonia gas released from poultry manure not only contributes to this smell but can be harmful for both the birds in the barn and the workers who frequent the barn.

Understanding how ammonia gas is formed, the major and minor impacts it can have on the bird and what can be done to manage this issue can be helpful for proper poultry management.

How is ammonia formed?
Protein is an essential component of poultry diets, as it is needed for the bird to gain and maintain body weight for the production of either meat or eggs. The building blocks of protein are amino acids, and proteins also contain nitrogen. Some of this nitrogen can be used by the bird and incorporated into tissues or eggs, but most of it must be excreted in the form of urine (the white part of bird droppings) or feces.

The nitrogen in the urine and feces is excreted in the forms of uric acid (around 80 per cent), ammonia (around 10 per cent) and urea (around 5 per cent). Once the uric acid and urea are excreted, they are converted to ammonia through microbial and enzymatic breakdown via the bacteria and enzymes found in the manure. The microbial and enzymatic breakdown process can only happen when the temperature, moisture, pH and nitrogen in the manure or litter fall within specific ranges and levels.

Without any further control, up to 50 to 80 per cent of the nitrogen in manure may be converted to ammonia. After this process, it is readily released into the air as a gas that can be detected by both birds and farm workers. Combined with water, gaseous ammonia can be associated with dust particles or moisture that come into contact with the mucus membranes of the body (e.g., eyes, respiratory tract, etc.).

Several factors can influence how ammonia is formed and released into the barn environment. The release of ammonia into the barn air can be impacted by the litter type, bird activity, stocking density, manure handling, frequency of manure removal and ventilation rate. The main factors that influence how manure bacteria and enzymes break down nitrogen to form ammonia are the nitrogen content, temperature, moisture/humidity and pH.

Often, in the poultry barn, the temperature, moisture or pH of the manure/litter can play an important role in the degradation of manure nitrogen to ammonia and the release of this ammonia into the air. The bacteria that are crucial for the breakdown of manure nitrogen require an alkaline pH of around 8.5. Typically, however, the pH of excreted poultry manure or litter is around a pH of 7.5 to 8.5.

The impact that the manure or litter moisture will have on the release of ammonia is dependent on the housing system used. For example, in floor or aviary systems, litter moisture is the more important factor in the conversion to gaseous ammonia, but in cage or slat systems, manure moisture plays a bigger role.

Regardless of the system, when it comes to their impact on the ammonia level, the ambient temperature and moisture level of the manure or litter are related. An increase of 1 to 2°C can affect ammonia levels, and that impact can be multiplied when combined with different moisture levels.

The relative humidity level of the barn can also impact the moisture level of the litter or manure. Humidity levels of 45 to 75 per cent may increase the release of ammonia. All these factors must be taken into consideration, as the temperature, relative humidity, litter/manure moisture and pH levels must all fall within a range that maintains the welfare of the bird.

What impact can ammonia have on the bird?
The issue of ammonia levels and their impact on birds – as well as humans – has long been a popular topic of discussion. Different countries and certifying bodies have different limits defining what is acceptable.

In Canada, the highest acceptable limit for ammonia levels in the barn is 25 ppm. Some groups advise that safe exposure should fall under 10 ppm of ammonia, but this may be difficult to consistently maintain in a barn environment.

Various groups have suggested that 25 ppm of ammonia for eight to 10 hours should be the maximum exposure for humans, while others suggest that 35 ppm for 15 minutes is still acceptable, and still others suggest that 50 ppm for eight hours is within reason. Every group agrees, however, that exposure of at least 12 ppm in humans can impact lung function and that exposure to 300 ppm or more is considered an immediate threat to human life and health.

When it comes to detecting ammonia, a human nose that has not been exposed to it may be able to perceive levels of 10 ppm or above. The minimum level of detection will increase, however, with prolonged or frequent exposure, as ammonia irritates the respiratory mucus membranes, causing chronic inflammation of the sinuses.

As such, for those who work in a barn environment, attempting to detect ammonia levels based on smell alone will not be effective. Ammonia detectors, which are easily accessible, are more sensitive and, thus, more accurate than the human nose.

Ammonia is toxic to animal cells. High levels of ammonia may lead to observable changes, such as snicking, difficulty breathing, irritation of the trachea (breathing tube), air sac inflammation, inflammation of the mucus membranes of the eye, or a combination of these symptoms.

Many other, less obvious changes can take place upon exposure to lower levels of ammonia. Studies have found that exposure to 20 to 25 ppm throughout production can result in increased susceptibility to secondary challenges (e.g., viral or bacterial), decreased feed efficiency and tissue damage. These changes have been noted in broilers exposed to ammonia levels that consistently fell between 20 to 30 ppm for 16 to 28 days.

Studies of turkeys have found that, among birds dealing an E. coli challenge, those that were exposed to ammonia levels between 10 to 40 ppm had more bacteria in their lungs than the birds that were not exposed to ammonia. In layers, it has been suggested that early exposure to ammonia could have a lasting effect and impact how pullets perform later as laying hens. Additionally, chronic exposure to high ammonia concentrations may impair egg production for layers.

Ammonia sensors are more sensitive and, thus, more accurate than relying on smell alone to detect the gas.

Ammonia and the gastrointestinal tract
At a microscopic and molecular level, researchers have found that exposure to ammonia can trigger changes within the animal. In rats, increased ammonia levels have been shown to reduce oxygen intake and lead to decreased energy efficiency. In these same rats, ammonia had a negative impact on the gastrointestinal lining, which reduced the survival of intestinal cells, thereby damaging the intestinal lining and impairing functions.

REDUCING AMMONIA LEVELS IN THE BARN
There are several strategies for decreasing ammonia in the barn. These strategies can be used individually or in combination and can help encourage good barn air quality. These strategies include ventilation and management of the barn and litter and manure.

Ventilation acts as an in-barn air quality control, removing ammonia from the barn and bringing in clean air. This method does not, however, reduce or inhibit the formation of ammonia. Nevertheless, maintaining appropriate ventilation during all seasons will help reduce the gaseous ammonia levels in the barn and keep the litter dry. Consult with a specialist to ensure that your barn has the necessary ventilation.

Good barn management can help remedy many situations. In the case of diminishing the formation of ammonia gas, proper barn management includes ensuring that the litter or manure is not wet. Several ways to keep litter from getting wet are: Fix leaky drinkers and sprinkler systems; choose the appropriate litter; maintain a suitable barn relative humidity for the age of the bird; reduce the potential for condensation; and properly heat and ventilate the barn.

The choice of litter may depend on what is available or easiest to use. Some litter types, such as long-cut straw, may not absorb moisture as well and, as such, may be more likely to get wetter faster than other litters. A barn’s potential for condensation can be determined by establishing how well the barn is insulated and knowing the temperature of the water entering the barn in the drinker lines and how the barn is heated and ventilated.

Strategies for managing the litter and manure can be separated into two main plans of action: managing the bird and managing the manure once it is in the barn. The formation of ammonia in the manure and its subsequent release as a gas form can be traced back to increased nitrogen levels in the manure.

Fecal nitrogen levels can increase if the bird does not properly break down and absorb the protein in the feed. This can happen if the bird’s diet features too much complex protein, if the bird is sick or if its gastrointestinal tract is not functioning properly. These issues can be remedied or prevented by balancing the protein and amino acid levels in the diet, as nutritionists do, and by maintaining the bird’s gastrointestinal health.

Another method to help prevent the formation of gaseous ammonia from nitrogen within the feces is to use components such as saponins, which are found in certain Yucca schigidera trees. Saponins have several modes of action and play a role in binding ammonia.

They have been shown to reduce blood urea and blood ammonium ions, reduce excessive nitrogen breakdown in the ceca and bind ammonia so it stays in the manure instead of being released as gas. When saponins are used in the feed from the time the birds are placed to the time the birds leave the barn, it is possible to increase the nitrogen levels of the manure without increasing the release of ammonia to the air.

Another method to help reduce the release of ammonia into the air is to manage the manure in the barn. Acidifying agents can be used to lower the pH of the litter (below its usual 7.5 to 8.5), which will help slow down and decrease the activity of the microbes that break down the nutrients in the manure to release ammonia.

Another option is to use odour- and moisture-absorbents in the litter or manure. These absorbents, which are usually clay-based, act to either slow down the microbial activity or lower the moisture content of the litter. Saponins can also be used as a spray over manure to help bind ammonia that has been released and reduce the odour.

There may also be microbial and urease enzyme inhibitors that can be used to prevent the action of the microbes and enzymes in the manure that help to release ammonia.

Conclusion
Managing ammonia release from manure and ammonia gas in the barn is important for poultry production. The creation of ammonia gas and its removal are complex topics but with a combination strategy of good ventilation, good barn management and reducing ammonia gas formation, this issue can be successfully overcome any time of the year.