Be Seen, Be Safe

A new way to track disease 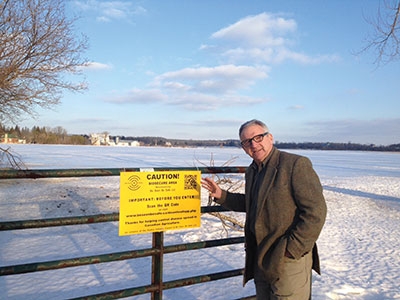 “Be Seen Be Safe”, developed by LRIC CEO Tim Nelson, is a new tool that monitors the coming and going of people and vehicles on and off farms

One of the most important procedures on a farm for protecting the health of both livestock and farmers is the maintenance of strict biosecurity protocols. But following them takes time, money and effort for little or no immediate benefit. On the other hand, however, a disease outbreak can occur with little warning, and it is those procedures that become immensely important, potentially saving individual producers many thousands of dollars, or industries millions. Biosecurity is akin to buying insurance – you hope you never need it, but if you do, you hope you have it.

The risk of an incident is low, but constant vigilance is the best way to decrease the risk as much as possible. Now there is a new Canadian monitoring program that might be able to assist in mitigating disease spread.

Tim Nelson, CEO of the Livestock Research Innovation Corporation (LRIC), has developed a program known as “Be Seen Be Safe,” which monitors the comings and goings of people and vehicles on and off farms and other agricultural properties that could be at risk through an application downloaded onto a smartphone or GPS-enabled device.

The purpose of Be Seen, Be Safe is simple, says Nelson – “It’s a cost-effective smart and simple tool to help mitigate disease spread and stop small disease outbreaks becoming catastrophic.”

An ounce of prevention
This project was developed to fill a need in the Canadian agriculture system for an easy-to-use, accurate, and inexpensive method of tracking visitors who travel to farms and associated properties, and may be inadvertently carrying a disease organism with them. The system utilizes real-time surveillance in order to mitigate the post-outbreak spread of a disease by predicting its movement and enabling a managed response.

The U.S. Food and Agriculture Organization spells out the need for the development of such a system in its Manual on Livestock Disease Surveillance and Information Systems. According to Nelson, the manual states:

While the old method of maintaining visitor logbooks, if used correctly and updated often, is most likely fine at an individual farm level, combining the information into useful data across multiple farms during a serious disease outbreak is impossible, says Nelson. In that case, a faster and automated system was needed to track outbreaks across the entire industry. The Poultry Industry Council has been trying to find a smart, cheap solution such as this for a number of years, he added, but the technology simply wasn’t available until now.

“This program complements good biosecurity protocols; it doesn’t replace them. But to err is human and as a result good biosecurity is simply not done properly 100 per cent of the time. Be Seen Be Safe takes the human element out of keeping visitor records and enables ‘real-time’ movement analysis of disease fomites [people and vehicles], and it’s innovative, nothing like this currently exists anywhere in the world as far as we can ascertain.”

Easy-to-use system
The Be Seen Be Safe app is quickly downloaded through a mobile phone or loaded onto a GPS-enabled device, and the set-up is simple: Sign up, enter your user profile information and that is it. The program runs silently in the background and automatically tracks movement in and out of properties that have previously signed up with the program.

Every property that is registered within the system has an invisible fence known as a “geofence” around it. The “fenced” boundary is set up remotely via satellite and logs each Be Seen Be Safe-enabled device as it enters and exits each property or location. No other locations are monitored or logged in the system. “It’s no different from the visitor record books currently in use. It simply automates the recording process and makes the records useful in time of emergency,” says Nelson. In addition, all records are password protected, and the information reported does not contain any personal information, simply movement into and out of locations on the system.

During an emergency, Be Seen Be Safe can quickly analyze visitor information obtained from a property that has been positively identified as infected. The program then plots the movement of visitors to that property throughout its infectious period, looks at where they came from and where they went in order to identify potentially infected secondary properties.

“These secondary properties can be instantly put on various levels of alert,” says Nelson. “Or, in cases where there is a vaccine for a specific disease, stock could be vaccinated against it, such as with foot and mouth disease. The drivers of potentially infected vehicles could also be notified instantly through the Be Seen Be Safe system and requested to take extra precautions to ensure their vehicles are cleaned and sanitized before going onto other at-risk properties.”

In certain scenarios, regulators may want to establish a “control zone” around an infected property within a few hours of the initial property being declared infected. “Be Seen Be Safe can instantly enable that virtual boundary to signal enabled devices as they enter the three-kilometre quarantine zone,” says Nelson. “Those devices then receive predetermined alert notifications such as instructions to stop and call a disease hotline number.”

New technology is often associated with a monetary cost, which for this program is approximately 32 cents per property per day, while downloading the application for the mobile devices and GPS systems is free. “It’s inevitable that some farmers will see it as simply another cost, so it could take a while for all stakeholders to recognize its benefit, adopt the technology and help build a reliable network. But industry, the progressive producers and those looking to automate and simplify their visitor records will drive it,” says Nelson. “However, we are building other management tools that the system will trigger which we hope will help the system get traction on a greater number of properties much sooner.”

Nelson hopes that once the technology gains a foothold in Ontario, it can then spread across Canada and perhaps into the U.S., so that every farmer and producer could reap its benefits.

“The sooner Be Seen Be Safe has a network up and running, protecting farms, stock and crops, peoples livelihoods and industry sustainability, the better,” he adds.

“In the meantime, we have a large-scale proof of concept pilot just starting up and once that’s done we’ll be showing industry how the system works and what it can potentially save for the little it costs. After that, it is all systems go to prevent the spread of disease.”

For more information on Be Seen Be Safe, visit: www.beseenbesafe.ca