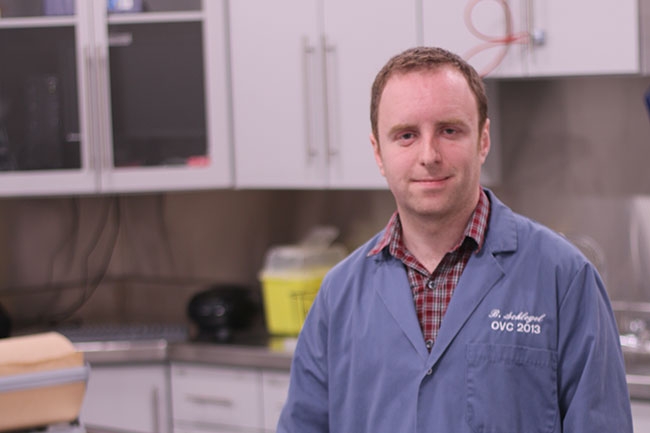 Poultry veterinarian Ben Schlegel’s resume reads more like that of someone who is on the brink of retirement, not someone who’s barely in his 30s.

Not only is he a doctor of veterinary medicine, but he also studied biotechnology and economics at the University of Waterloo and holds a master’s in avian health and medicine from the University of Georgia and the University of Melbourne. For his colleagues and clients, Schlegel was an easy nomination for this year’s Who’s Who issue.

Schlegel grew up on a broiler, swine and cash crop farm near Tavistock, Ont. He has two brothers, both of whom still work on the family farm. Although he still devotes some of his time to the family farm, Schlegel chose to pursue a more scientific career, studying biotechnology and economics at the University of Waterloo. Inspired by a co-op work term with a vaccine company, he later decided to pursue veterinary medicine at the University of Guelph.

Following graduation in 2013, Schlegel began work at Poultry Health Services in Airdrie, Alta. He’s still with the company today, but now works in the newly opened practice in Stratford, Ont.

For Dr. Tom Inglis, CEO of Poultry Health Services, Schlegel was an obvious nomination choice. Inglis said his background in practical production, plus his academic history makes him a top veterinarian.

“He’s got a really diverse and in-depth understanding of production from the farm level through the microbiological level and all of the physiology,” Inglis says. “If he were in entertainment, you’d call him a triple threat.”

Schlegel has been rising as a star for three or four years now. He spoke at a conference with Temple Grandin on humane euthanasia, and has accomplished a lot, but in a very humble, down-to-earth way.

On the diagnostic side, Inglis notes he’s been involved in spearheading a project with a collaborative group in Ireland, looking at chicken astrovirus or white chick syndrome.

“If I had one sentence to describe what Ben’s done that is impressive is, he’s gained the trust and respect of his peers and his colleagues, and he works well with other veterinarians across the industry and across the country. That’s probably the highest compliment I could give another veterinarian, is just that ability to work well and gain the respect of colleagues – that’s kind of what it’s all about on the professional side,” Inglis says.

In another project, Schlegel evaluated all of the different euthanasia methods currently available for poultry. He has also conducted a full evaluation on the physiology and welfare aspects of the low atmospheric pressure stunning (LAPS) system, something that will be implemented in processing plants in the future.

Schlegel has done quite a bit of work with turkeys, including a project evaluating the strains of hemorrhagic enteritis virus (HEV), conducting the fieldwork and collaborating with a PhD student at the University of Calgary.

Having someone who grew up farming on staff “keeps us all honest,” Inglis says. “Sometimes you can start dreaming in Technicolor, and he really adds the practical element of asking whether or not we can accomplish this on the farm. He’s very valuable.”

Alberta-based poultry breeder Mike Klassen agrees. He’s known Schlegel since 2015 as one of the vets from Poultry Health Services in Airdrie that has helped with some of the submissions from his breeder farm.

“What makes Ben stand out for me is his attention to detail and explaining thoroughly what he has found,” Klassen says. “He never made me feel like he was superior and was interested in whatever input I could give him.

“There was a time when we were struggling with our first flock of 708s (Aviagen) that Ben had actually come right to the farm and in my barn to observe my birds and do some postmortems,” Klassen continues. “He was very good at explaining what he was observing and willing to do more testing to back up those observations.”

Through that time, Klassen says Schlegel showed a lot of care and concern for their situation. “Not only was it a pleasant experience to work with Ben, but he also helped us navigate our way through a difficult time in the flock we were dealing with,” Klassen adds.

Perhaps that is exactly what makes Schlegel so good at his job – he thoroughly appreciates working with producers and others in the industry. “I really enjoy working with the people that I get to work with and it’s just really important to me to be involved in producing food for people,” Schlegel says.

“Specifically, as a veterinarian, I get to contribute specialized knowledge and a diagnostic solving approach to problems, and then we’re able to prevent disease in the first place and contribute to better production out there.”