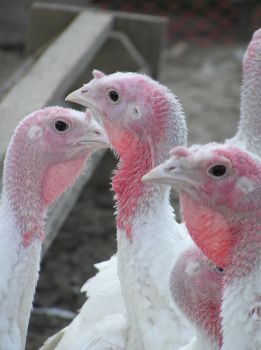 June 19. 2009 -Until recently, Bordetella hinzii was believed to be nonpathogenic in
poultry. But Agricultural Research
Service (ARS) scientists have shown that the bacterium caused severe
disease in turkeys that was attributed to another Bordetella species.

June 19. 2009 -Until recently, Bordetella hinzii was believed to be nonpathogenic in
poultry. But Agricultural Research
Service (ARS) scientists have shown that the bacterium caused severe
disease in turkeys that was attributed to another Bordetella species.


B. avium is a pathogenic bacterium that causes upper
respiratory disease in poultry and wild birds. It is very similar to B.
hinzii, and the two species are difficult to distinguish without using
highly specific, DNA-based tests.


Scientists at the
ARS
National Animal Disease Center (NADC) in Ames, Iowa, used these tests to
examine several Bordetella isolates, including some that had caused 100 percent
morbidity in turkey poults. Although the isolates had been labeled as B.
avium, the scientists found that they were actually B. hinzii,
flouting conventional wisdom that the bacterium could not cause disease in
poultry.


B. hinzii has been found in poultry with respiratory disease,
but was believed to be nonpathogenic because previous attempts to cause disease
in chickens and turkeys with the bacterium have failed.

To test the bacterium's pathogenicity, NADC microbiologist Karen Register and veterinary medical officer Robert Kunkle selected six genetically distinct strains of B. hinzii and
attempted to infect turkeys with them. Four of the strains were able to grow
and persist in the trachea and also caused clinical disease. The strains varied
in severity, although none demonstrated 100 percent morbidity.

This study showed for the first time that some strains of B.
hinzii can cause disease in turkeys. The
results
of the study were published in the March 2009 issue of Avian Diseases.

In a related study with chickens, no birds developed clinical disease,
suggesting that the pathogenicity of B. hinzii does not extend to
chickens.


Now, NADC scientists are examining how the disease-causing strains of
the bacterium differ. They are also working to identify virulence factors that
influence disease development in turkey poults.