Biosecurity and your water system 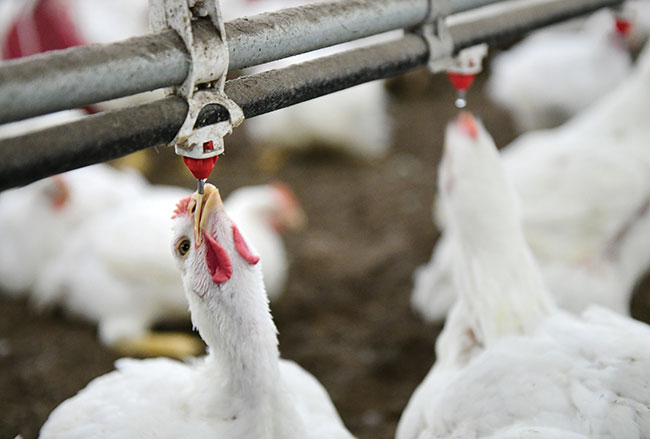 Well sure, I know I’m supposed to clean my water system and treat my water, but how does the biosecurity on my farm affect the water? Let me tell you a little story.

Greg was responsible for almost 100,000 birds every flock. He had been growing birds for over 20 years and was regularly a top performing grower. When it came to his water he would clean between flocks occasionally, but he had a good well and had never had any real water issues.

That’s why he was confused when one morning he opened the door to the barn and noticed some odd activity. As a few birds got up and moved around it stood out to him that none of them were eating or drinking. He had that stomach drop some of us know too well.

“Oh gosh, here it is….” What do you do first? Are they sick? Is it my equipment? Is the air moving? Too hot? Too cold? Is the feed auger working? Greg bent over to trigger a drinker, more out of habit than really thinking anything was wrong. Nothing. He walked 10 feet – still nothing. “No, no, no” he was thinking. He crossed to the other water line. Still nothing. Why would the water be off? Just totally off?

Some quick checking found that the water was not off. The pressure gauge was normal. There was no major leak – in fact his water meter was at a standstill – not a good sign. At the end of a water line, he took off a cap. A slight trickle of water poured onto the litter and then a few chunks of “something” dropped.

Greg started taking caps off the lines, putting buckets under them and flushing them. Immediately there were piles and piles of wet gunk falling into the buckets. The debris looked like red cabbage coleslaw. What in the world was going on his water line?

After a long day of work (raising water lines, putting in a water line cleaner, letting it sit a few hours, flushing it out, triggering every single drinker for fresh water then lowering lines) Greg was finally able to at least get water to his birds. Some of the sample he had flushed from the lines was sent to a forensics microbiological laboratory.

What had grown in his water line was an Auerobasidium spp. This is a yeast-like fungi that is common in the soil, especially agricultural soil. When the soil is dormant and dry the Auerobasidium spp. fungi release spores. Many of us may have seen this species on shower curtains or damp drywall. Young colonies will be pink then turn brown then black as they age. What had happened for this to wind up in Greg’s water line?

After a few days of digging into the issue and asking questions, we found out that Greg had a neighbor that grew soybeans. A week before Greg got the last flock placed his neighbor was tilling under his now-dormant (for the season) crop land. Greg had gone over to the neighbor’s farm in his four-wheeler a few times that same week. Then he came back to his own farm and took his four-wheeler into his barns doing all the things we do to get ready for birds being placed.

If Greg had simply washed his four-wheeler tires before going into his barns and had water treatment going in his water lines, he most likely would have avoided this near catastrophe. No, rinsing some tires does not make them perfectly organism free, but what our biosecurity measures do is reduce the load of foreign organisms we bring onto the farm.

A smaller number of organisms has less of a chance of becoming a dominant population over the flora that is already present on a farm. Any reasonable measures we can take to reduce the size of that foreign population only helps us as growers.

Mary K. Foy is the director of technical services for Proxy-Clean Products. The U.S. company’s cleaning solution is used in Canada as part of the Water Smart Program developed by Weeden  Environments and Jefo Inc.