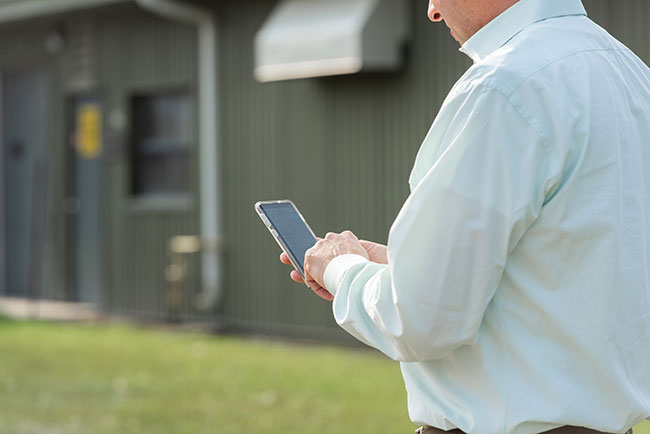 Working in collaboration with the Feather Board Command Centre (FBCC), Farm Health Guardian developers Be Seen Be Safe have chosen the Niagara region in Ontario for its pilot. The program is especially timely given recent avian influenza outbreaks in the east of the country, which highlight the importance of on-farm preparedness.

Farm Health Guardian is a Canadian-made geofencing platform that provides real-time disease monitoring and response technology platforms. The platform uses geofencing, smartphones and GPS technology to track and record the movement of staff, visitors and vehicles in and out of production facilities in real time. The different technologies communicate with an app and provide contactless digital pre-screening, paperless check-in, vehicle passport and GPS tracking.

When individuals within the network get hit with disease the system can track and trace movement around that location in just a few minutes. An alert is then sent to individuals who visited the location, those intending to visit the location and any producers in the area who are registered to receive alerts. In this way, disease outbreaks can be quickly contained and the risk of spread is all but eliminated. The system works best when all members of the supply chain – feed suppliers, catching crews, egg collectors, manure haulers, veterinarians and producers – participate.

Pilot project
The pilot project is designed to be a simple way to test the Farm Health Guardian system in conjunction with FBCC. Its purpose is to determine how digital technology can be used to speed up detection, reduce disease spread and improve communication, explains Rob Hannam, director of business development for Farm Health Guardian.

“When disease has happened in the past, and there are some examples in Ontario, it has inadvertently spread to several farms,” Hannam says, pointing to a recent disease outbreak that quickly spread to 11 farms.

The pilot project aims not only to speed up detection but also to improve communication, something Hannam says is important to producers who want to know where and when outbreaks occur and how they can reduce risk.

The pilot project was launched in early January and will wrap up in early April. Under the project, the Farm Health Guardian app is used to record movement of people and trucks, on and off of the farms, in order to do contact tracing.

The project launched in the Niagara region, a location that was chosen for its relative self-containment and for its farm concentration. The region is home to a mix of chicken, turkey, egg and hatching farms. The region also has experienced infectious disease outbreaks.

“Farmers know about disease and they’re wary of it,” Hannam says.

Response from service companies – feed suppliers, catching crews and hatcheries – has been great, Hannam notes. While a few producers did join the pilot project, Hannam thinks most are waiting to see the benefits before registering on the application. Those who have signed up, however, will get the benefit of receiving instant messages.

Users can turn off the geolocation settings within the app should a producer not want to share their whereabouts. In an outbreak, they will still receive instant messages from FBCC about movement on and off their farm.

Under the pilot project, Farm Health Guardian captures and records the movement of participating trucks and people on and off-farm over a 90-day period. The project also involves a mock disease simulation. Using Farm Health Guardian’s mapping and disease analysis tools, FBCC should be able to assess which trucks, people or farms are at risk and send immediate notifications.

The purpose of the pilot project is to determine how digital technology can be used to speed up detection, reduce disease spread and improve communication. PHOTO CREDIT: Farm Health Guardian

Exciting potential
Tom Baker, FBCC manager, believes Farm Health Guardian offers real potential in terms of helping control the spread of disease. While biosecurity is high in Ontario, he says breaches can and do happen. “The tools for controlling disease spread are still, I think, somewhat primitive,” Baker says. “The idea of having technology like this would allow us to very quickly communicate to at-risk farms and also be able to trace an outbreak forward or backward.”

The traceability aspect is important, especially considering disease incubation periods. Avian influenza, for instance, has a flock incubation period of as much as 14 days. Infectious laryngotracheitis (ILT), an acute, highly contagious herpesvirus infection in poultry, is also of concern. Since many diseases are not federally reportable, the industry is pretty much on its own when it comes to response.

In the past 14 months, there have been two significant disease outbreaks in the Niagara region. Following those outbreaks, industry got together to discuss lessons learned to see where improvements could be made. Baker says one criticism they received was on communication timing. Producers felt email notifications were insufficient and inefficient.

“We’re quite excited about this pilot to see if it can be as effective as we think it can be,” Baker says.

Beyond its ability to foster quick communication, Farm Health Guardian offers a mapping feature. Baker finds this part of the application particularly intriguing. It not only allows the FBCC to map out the farms and small flocks in close proximity but also gives them the potential to map other risk factors, epidemiological links, the movement of equipment, personnel and birds, wind direction and humidity. Currently, FBCC is using the tool experimentally and Baker is optimistic.

“Regardless of how successful the pilot might be, it’s not the magic bullet,” said Baker. “But this could be the next step forward in containing disease spread.”

The pilot project will wrap up in early April. To learn more about Farm Health Guardian, visit: farmhealthguardian.com.