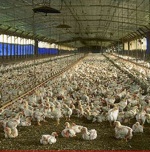 Birds of a feather: commercial producers play chicken with Avian Flu
In the late 1980s thousands of chickens died from a cancer
caused by a virus known as avian leukosis virus J because they were all
descended from a few roosters susceptible to the disease.


In the late 1980s thousands of chickens died from a cancer
caused by a virus known as avian leukosis virus J because they were all
descended from a few roosters susceptible to the disease.

This is just one example of how a lack of genetic diversity can imperil livestock
and agriculture. Similar instances abound from the Irish potato famine
of the 19th century to cattle raised for meat—one bull named Ivanhoe
passed on his genetic susceptibility to an immune system disorder to
roughly 15 percent of all the Holstein bulls in the U.S. today. Now a
new study, published in Proceedings of the National Academy of Sciences USA,
shows that the world's 40 billion commercial chickens—those raised for
their meat and eggs—have half the genetic diversity possible in the
chicken genome, rendering them susceptible to other crippling disease
outbreaks.

Avian disease specialist Hans Cheng of the U.S. Department of Agriculture and his colleagues compared the variety of genes
in more than 2,500 chickens, 1,440 of whom were from commercial farms
in the U.S. Some of these industrial chickens had lost as much as 90
percent of the genes carried by their peers, such as the red jungle
fowl of Asia, which gave rise to all chickens, as well as noncommercial
breeds of chickens like the Chinese silkie. On average, commercial
chickens lacked at least 50 percent of the genes present in the chicken
genome.