B.C. looking for answers after two years of rising cases. 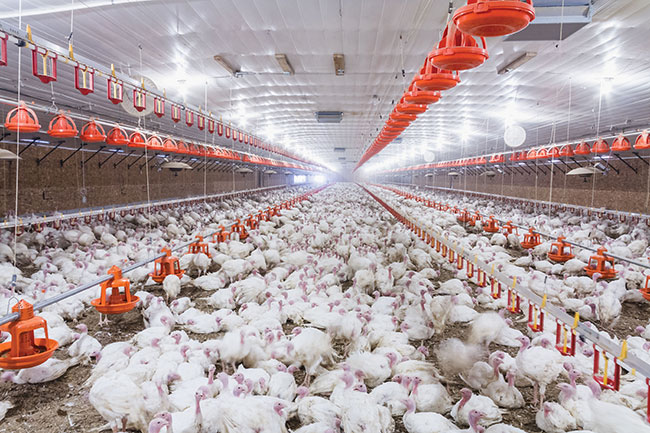 Incidences of blackhead disease in turkeys have been on the rise in British Columbia in recent years, particularly in the Fraser Valley. PHOTO CREDIT: Big Dutchman

Incidences of blackhead disease in turkeys have been on the rise in B.C. in recent years, particularly in the Fraser Valley. Last year marked the second consecutive year where the first case of blackhead disease was reported in March instead of closer to the summer and 2022 is off to an even more unusual start with one case reported in January and two in February.

That’s according to data shared at a blackhead disease industry update at the end of February. Historically, cases have been low, with only a few farms per year reporting infections that were generally seasonally clustered during the summer months. It wasn’t until 2020 that cases skyrocketed to 20 and, although that number dropped to 13 last year, nine of those cases were reported in a single month – August.

“We’re now getting cases all the way through the year more than we would have seen five or six years ago,” notes Michel Benoit of the B.C. Turkey Marketing Board. “There was a week in August (2021) where I think I was getting a case a day almost. It was really, really unusual to have this incredible spike in one month.”

Heat dome connection?
There is speculation that the extraordinary June heat dome in Western Canada that saw temperatures near 50°C in some regions could be a driver of that spike, as the affected birds were poults during the event.

Blackhead is a parasitic disease with mortality ranging from 10 to 100 per cent depending on the flock. Turkeys are most susceptible among commercial poultry, according to Dr. Gigi Lin of B.C.-based Canadian Poultry Consultants Ltd., but layers and broiler breeders can also be impacted.

“The protozoa that causes this disease can be carried by a worm that you can see in the ceca of birds and their eggs can carry the histomona that causes blackhead,” says Lin, who recently prepared a case report on blackhead. “Ceca eggs are very sticky; once you have histomona and ceca eggs, they are very difficult to get rid of and once you have a flock that shows signs of the disease, it will spread within that flock horizontally.”

Looking for answers
There are no real answers so far about what is behind that broad mortality range, but it is thought to be multifactorial. Genetics could play a role, as well as the presence of gut health issues, co-existing diseases like enteritis or E. coli, or even the barn environment itself.

“Blackhead can happen anywhere there is turkey production, but B.C. is unique, especially in the Fraser Valley and Lower Mainland, which is so susceptible to contagious disease because of the density of poultry and the interconnection between hatcheries, feed companies, workers, personnel, wind and water flow,” Lin explains.

The proximity of different types of commercial poultry production is one of B.C.’s biggest risk factors, she adds. Complicating the problem for turkey farmers are multi-age versus all-in, all-out production facilities that make breaking the disease cycle challenging. 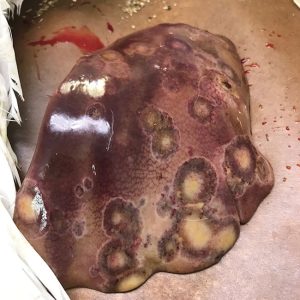 Blackhead is a parasitic disease with mortality ranging from 10 to 100 per cent. Pictured is the liver of a turkey with blackhead. PHOTO CREDIT: Hybrid Turkeys 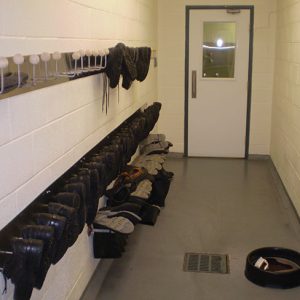 Experts say enhanced biosecurity, such as having barn-specific coveralls and boots, is important for protecting flocks against blackhead disease

Provincial approach
The B.C. turkey industry has formed a committee that includes Lin, government veterinarians and industry and producer representatives to collaborate on finding strategies to deal with the disease. That includes research to identify causes and possible solutions.

By comparison, those without blackhead had barns renovated within the last five years, used partitions in the barn and barn-specific PPE and boots that were regularly cleaned and fully cleaned litter from brooders and growers at the end of each cycle.

Conditional drug approval
In July 2020, Health Canada conditionally approved the use of paromomycin sulfate, a broad-spectrum antibiotic, through an emergency drug release authorization to try and help the industry cope with the blackhead challenge.

This allowed veterinarians to use the drug to treat infected flocks, which Lin did on three farms in the Fraser Valley between August and October of 2020. She had limited success at best.

According to Lin, the drug is approved for blackhead treatment in several European countries, but in a preventative manner, whereas the Health Canada emergency use authorization was only for flocks already showing symptoms of the disease.

“Once they have it and you see symptoms, it is too late. The antibiotic function is in the intestinal tract but most mortality comes from damage to the cecal sack lining and then it spreads systemically, where the antibiotic doesn’t do its job,” Lin explains. “The only way it can help would be as a prevention, but we must consider prudent use when it comes to giving antibiotics preemptively.

Ideally, Lin would like to expand her research with paromomycin sulfate on farms who have a history of blackhead disease to see if strategic, preemptive use could break the disease cycle. This is not an option currently, though, due to Health Canada restrictions on the product.