Blockchain for poultry has arrived

Technology poised to fundamentally change how the industry does business. 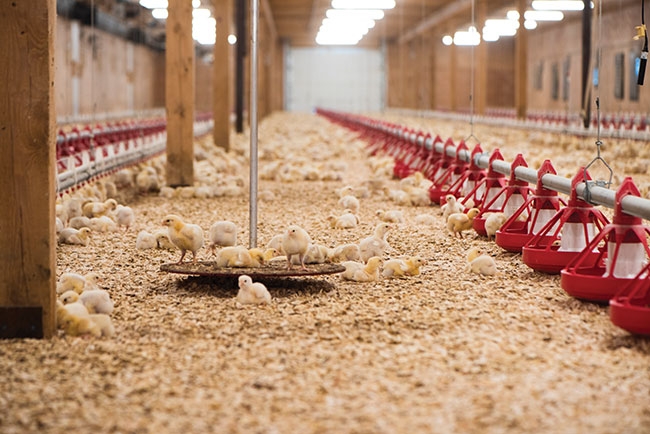 Toronto-based Intellia’s Compass System combines sensors with artificial intelligence to predict when birds will get to their target weight for the purpose of blockchain transparency.

Just two years ago, blockchain was a relatively unknown concept. Today, however, it is being called the biggest technological innovation of the decade and most influential corporate game-changer across industries.

The speed at which it has burst onto the business world leaves many – poultry producers included – wondering what on earth it is and why it suddenly matters so much.

A blockchain is a secure database that automatically and in real time captures fully transparent, encrypted (non-alterable) blocks of data from links in a value chain, and then freely shares that information with all parties in that chain. This data sharing allows increased product security and traceability, maximized efficiency and a resulting reduction in costs, the elimination of human error, and – when the information is provided through to the final link in the value chain – improved consumer confidence.

Blockchain depends on three prerequisites. First, all participating links in the blockchain must be open to complete transparency. Second, because it is a digital technology that depends on data, the processes within each participating company must be digitalized and standardized – every input and output must be recorded according to measurements understood by every other part of the blockchain. Finally, there must be broad participation of stakeholders along the value chain.

What does blockchain look like in real life application? The automotive industry is already using it for the delivery of parts and resources. In the event of a product shortage or defect, blockchain immediately notifies every value chain participant, pinpoints the exact origin of the fault and automatically selects an alternative source for the product to prevent a slowdown or a recall.

Poultry potential
At this point, blockchain is only being piloted or used in limited scale in the poultry industry. However, when fully implemented, a poultry blockchain could track individual birds from egg to dinner plate. This tracking could include every input and output from each link in the supply chain, from breeder, hatchery, producer, slaughter house, processor and retailer, to feed-mill, veterinarians, transporters, certification bodies, etc.

Bird health and growth rate, food and water consumption, origin and transport details, production results and more could all be transparent to the entire value chain. Ordering and payments between suppliers could be automatic and immediate. Even the exact arrival time of the trucks coming to pick up the fully-grown birds could be optimized to precisely maximize efficiency.

Food giants on board
While the benefits of blockchain are obvious and significant, not everyone is keen to jump onboard with new technology. There may be little choice but to comply.

According to a Rabobank report from last December, “Companies that want to remain successful in the future food value chain should start to explore options for participating in blockchain initiatives…” Already, Dole, Kroger, McCormick and Company, Nestle, Tyson Foods, Unilever and many others are working towards implementing blockchain-enabled food tracking systems.

Last June, Walmart announced it intended to be fully blockchain compliant by 2022. Then, in September, it pushed an even tighter timeline for certain suppliers, announcing its leafy green suppliers would be required to participate in blockchain for full traceability within one year.

Blockchain is coming, whether producers choose to push it from within industry or wait to have it forced upon them from above.

Early poultry adopters
Hendrix Genetics Innovations is among the first companies in the world to pilot the use of blockchain in the animal protein value chain. In 2017, the company and several of its value chain links conducted a proof of concept project to investigate the potential and limitations of blockchain as it relates to the animal protein.

Specifically, the project trialled replacing the existing Letter of Credit system with a blockchain based system surrounding deliveries and payments of eggs. In 2018, Hendrix Genetics Innovations began two more pilot projects, one relating to eggs and the other to animal welfare standards in turkeys in the Netherlands.

“For us, blockchain is an interesting technology as it has the potential to make supply chains safer, more efficient and more sustainable,” says Thijs Hendrix, portfolio manager of innovation projects at Hendrix Genetics Innovations.

“It can make the supply chain operate more efficient[ly] by sharing the relevant information. Blockchain also allows secure sharing of real-time data. This has benefits for all parties involved. Consumers will benefit from more transparency and improved food safety.”

“Blockchain technology surely has the potential to impact our value chains in the coming years. The technology is still in development and many applications are being developed. The pace of adoption will also depend on the success of these applications,” Hendrix says.

Next-level transparency
In 2014, Cargill derivative Honeysuckle White conducted a U.S. consumer survey that showed 44 per cent of consumers prioritized companies being transparent in food production. The same study conducted three years later showed results had jumped to 88 per cent of consumers. By the time the second study was conducted, Honeysuckle White had already come up with a way to address the obvious trend: A limited use of blockchain.

Leading up to Thanksgiving of 2017, Honeysuckle White became the first frozen turkey supplier to offer a blockchain-based link between consumers and the farmers who raised their holiday turkeys.

The program was simple: Each turkey in the relatively small farm-to-table pilot project carried an on-package code that linked, via the Honeysuckle White website, to information about the family farm where that bird was raised.

“This opened the door for consumers to know more about the farmers and the farms where their turkey was raised. It allowed us to tell more of a story,” says Kassie Long, Honeysuckle White’s brand manager.

Consumer trust bolstered
The program was a clear success.

“We were able to identify that (the program) provided consumers with a sense of security and trust in the product they were purchasing, allowed them to feel they were buying a higher quality product that received better care, and left them feeling better about choosing a product that comes with an additional level of traceability and accountability,” Long explains.

It’s important to note that the birds raised for this program were identical in every way to Honeysuckle White birds raised outside of the blockchain program: All come from the same kinds of family-based farms and all receive the same minimum standards of care.

While the pilot was not large enough to determine whether the program influenced buying decisions, the fact that consumers feel the blockchain-enabled product is of higher quality and that the farming practices are more transparent is a huge win for the company.

In 2017, approximately 60,000 birds raised on four family farms participated in the Honeysuckle White pilot. In 2018, the company grew the program to include approximately 70 farms and 200,000 birds.

Though Honeysuckle White’s traceable birds are currently only available during the Thanksgiving and Christmas holiday seasons, Long says the company is planning to grow the program in the future.

Bright horizon
Honeysuckle White’s tracking of product from farm to consumer is a very limited-scope blockchain. In its truest form, a blockchain’s data capture should be automatic and fully transparent rather than controlled by corporate messaging for marketing purposes. As such, a more authentic blockchain would offer a transparent, data-driven overview of each turkey’s production, rather than a sanitized story-based information chain.

The uncertainty surrounding just what qualifies as true blockchain is evidence that the technology is too new to have yet been fully understood and embraced by industry.

While the general consensus is that blockchain’s full implementation is still three to five years away, at least one blockchain expert says that timeline is entirely outdated.

John Greaves, the blockchain solutions architect for Lowry Solutions and recently appointed chair of the AIM Blockchain Council, points out that 18 months ago, just two companies had invested in blockchain. Now, he says, there are 2,000.

By 2020, he anticipates 20,000.  Meanwhile, the International Organization for Standardization has already created an ISO standards group for blockchain: An unheard-of speed for a new technology.

Toronto-based Intellia’s Compass System combines sensors with artificial intelligence to predict when birds will get to their target weight for the purpose of blockchain transparency.

“We’re beta collectors for blockchain,” explains Robert Lynn, an independent representative with Intellia. “Where we add additional value is that we also have an artificial intelligence (AI) component that analyzes the data so that what we hand over to the blockchain is already massaged or processed for results.”

Intellia offers broiler barn sensors including bin scales, water meters, gas (ammonia and C02) sensors, humidity sensors, etc. – measurements of virtually anything that could affect the growth of the birds. The data is pulled into Intellia’s central database along with bird weights measured in real time (typically every 15 minutes) by scales built into hanging perches. Based on all of this data, an AI algorithm churns out a constantly adjusting prediction of the exact date and time the birds will get to their target weight.

The system offers real-time visibility and learns through use, Lynn explains. Since every barn offers a different environment, light regimen, water pH, etc., every barn’s growth curve is slightly different. The Intellia algorithm compares the historic growth curves of previous flocks raised in that individual barn to the current flock to improve accuracy of growth predictions and to issue warnings when any sensor records an unexpectedly high or low result.

“There’s a lot of obvious benefit to the grower. You want to ship the birds at just the right time. If they are overweight, you’re going to pay for unnecessary feed. If they are underweight, they might not meet the cutter’s settings,” Lynn says. “Even if you can save a penny per bird on feed or efficiency, that can be millions of dollars in savings.  Depending on your volume, the savings can keep going up and up.”

Lynn says that processors in the U.S. are “all over” this form of data capture because they own the birds during production. In Canada, producers are slower to jump aboard because they are smaller scale and more likely to be concerned about privacy. Still, once they hear the benefits to their individual bottom line, their interest spikes, Lynn says.

He has one other absolutely key message he reiterates to producers:  “As a grower you are supposed to take a water bucket, dump it upside down in the middle of the barn, and sit on it in the middle of your flock. That’s the best way to understand first-hand whether they are well or not. Doing it that way was okay for the volume that growers used to have. Now, with the need to produce more food with less space, these are tools to make it possible while still prioritizing animal health. But nothing is ever going to replace the grower. That’s the first thing I was ever taught. Nothing will replace the grower.”