The latest on innovative technologies featured over the last few years. 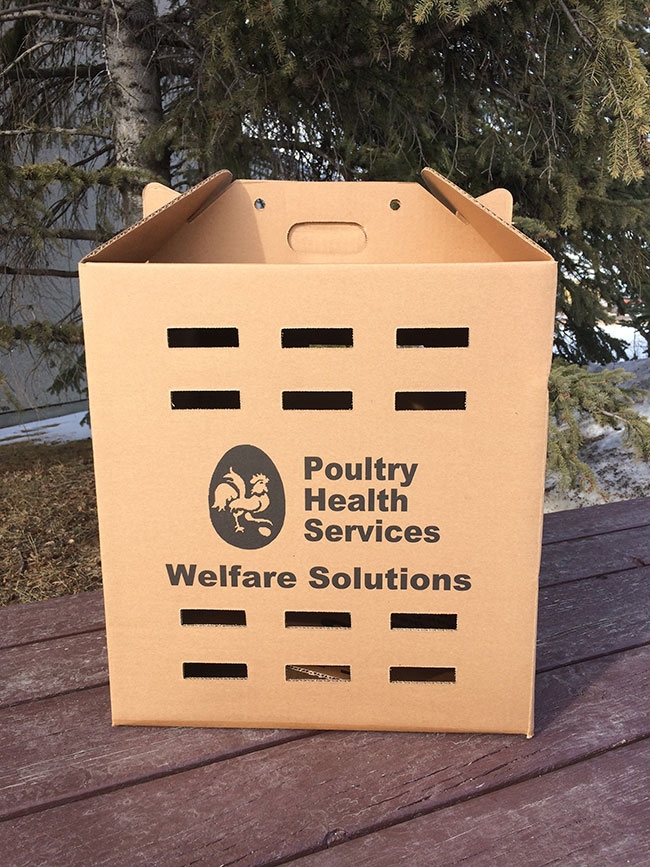 The Humane Biosecure Transport Carrier, developed by the Institute for Applied Poultry Technologies with support from Poultry Health Services, can transport one or several young chickens or turkeys, totalling 15 kilograms.

When Canadian Poultry introduces new technologies for the farm, we often leave readers wondering “where are they now?” months or years later. Well, wonder no more. We’ve tracked several seemingly groundbreaking innovations and now we’re bringing you updates on how those innovations have panned out since we first presented them in our pages.

The CracklessEgg
When the CracklessEgg broke onto the Canadian poultry scene in 2003, it was sorely needed. Before its invention, a way to easily and immediately measure impact jarring of eggs in order to minimize cracking was just a dream.

The CracklessEgg was invented by a young farmer from Prince Edward Island who first created a potato version (the SmartSpud) to reduce bruising during harvest and handling. The CracklessEgg mimics a real egg in shape, size and weight as it travels from the chicken to packing tray and beyond. While travelling along conveyor belts and elevators alongside real eggs, the CracklessEgg wirelessly transmits real-time data on the level of impact, velocity, temperature and more, allowing immediate adjustments to handling equipment – and immediate savings.

The CracklessEgg’s inventor founded Sensor Wireless, which was sold to Moncton, N.B.-based Masitek in 2010. In 2016, Masitek created two divisions: aaggrrii (for agricultural products such as the CracklessEgg and SmartSpud) and MMAAZZ (for beverage and other package handling applications).

CracklessEgg sales grew about 87 per cent from 2014 to 2016, with 20 per cent of sales currently going to the United States and the other 80 per cent going to other countries. Marketing director Teri Maltais says smaller farms do buy the system, but the majority of sales worldwide are to large farms and processors.

Humane Biosecure Transport Carrier
There are significant biosecurity and animal welfare concerns when an individual bird must be transported from a farm to a lab, where samples are taken or a post-mortem is conducted. It’s a potential disease risk to use the same container over and over, and containers can also be too small and have inadequate air flow. For these reasons, in 2014 Poultry Health Services (PHS, an agency contracted to deliver veterinary services in Alberta) supported the Institute for Applied Poultry Technologies’ efforts to develop and manufacture an adequate live poultry transport carrier – now known as the Humane Biosecure Transport Carrier (HBTC).

PHS presented a prototype for feedback and subsequently added modifications such as waterproofing. The box can transport one or several young chickens or turkeys, totalling 15 kilograms.

Lorrie Kadylo, a technician at PHS, says that initially, “As an approach to promote and introduce the boxes to the industry, we offered them free of charge. They were distributed to Alberta, Saskatchewan and Manitoba.” PHS is now ordering more HBTCs for distribution and hopes to keep the cost between $15.00 and $20.00. For more, visit poultryhealth.ca.

Holos
Holos is a free, bilingual, whole-farm software program first tested in 2008 by Dr. Henry Janzen, a soil scientist at Agriculture and Agri-Food Canada (AAFC). It calculates possible ways to reduce greenhouse gas (GHG) emissions by making changes on the farm, but as Janzen explained in a story we published in 2010, “At the same time we are pleased to provide this research-based interactive framework, we recognize that practices that may reduce GHG emissions on a given farm might also affect productivity, profitability and environmental factors such as water quality and soil quality. We acknowledge that GHG emissions are only one factor among many that farmers consider in deciding which practices to use.”

The program is being continually upgraded. AAFC reports between October 2014 and January 2017, Holos was downloaded 1,064 times; AAFC does not track the type of farmers who download the program, nor any changes farmers may have made to their operations as a result.

Holos version 3 is slated for release this year and will include a cost-revenue sub-model that lets users estimate economic effects of management changes affecting GHG emissions. Users will also be able to enter inputs in imperial units. For more, visit agr.gc.ca/holos-ghg.

The Farm Toolbox
In 2010, Costa Aza, a second-generation poultry farmer in West Lincoln, Ont., introduced The Farm Toolbox at the London Poultry Show. He developed the online farm management software for his operation because he wanted help with paperwork, keeping track of profits, complying with various on-farm programs, comparing cycles and so on.

Along the way, the system was purchased by Lyngsoe Systems, a logistics software company out of Maryland. However, The Farm Toolbox remains a tool for Canadian farmers. Lyngsoe has added several new features, including a “benchmark results” tool that lets farmers compare their results to averages achieved by other anonymous users. Farmers can also compare how different feed mills, hatcheries and processors perform on parameters such as weight gain, net profit per chick, feed consumption and survivability. In the daily records section, users can now see how mortality develops and compare mortality between flocks, as well as customize tracking of humidity, water consumption, static pressure and so on.

Potential customers can log in for a demonstration and Lyngsoe Systems says new users can try the system free for three months. For more, visit thefarmtoolbox.lyngsoesystems.com/tft.jsf.

Several years ago, Nelson hired software developers to work with him to create this lightning-fast method to track people and vehicles in a disease outbreak. A farm’s borders are entered in the system (geo-fencing), and then individuals or vehicles visiting the farm are automatically registered on Be Seen, Be Safe through the GPS on a vehicle or a person’s smartphone. Each visitor is welcomed to the farm with a system message, and individual visitor and farm identities are only accessed by authorized personnel in an emergency, when quick tracking of farm visits and establishing quarantine are critical.

In late 2016, a two-year Be Seen, Be Safe project was completed involving every producer of the Egg Farmers of Ontario, the Ontario Broiler Hatching Egg & Chick Commission and the Turkey Farmers of Ontario – totalling almost 900 farms. Things went well and the company continues to develop markets in Canada and abroad.

Nelson and his business partner, Joel Sotomayor, have also developed Farm Health Monitor. Nelson calls it “a true early warning system.” If symptoms or bird deaths are noted on a farm, the farmer or vet can input information into the system, which has mapping, analysis and alert capabilities. It can be used to track serious diseases and manage production-limiting ones.