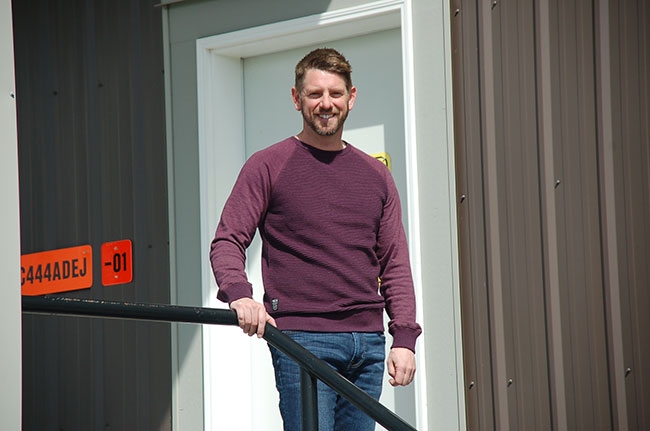 For as long as he can remember, Dan Kampen has been in poultry barns. “My mom introduced me to the barns before I was two years old,” the Abbotsford, B.C. turkey and egg farmer recalls.

After going to university to take teacher training and spending a year in Japan, Kampen returned to the family farm, taking over management of the egg farm with his brother in 1996. “My dad believed in education,” he says. “He even offered me flying lessons.”

In 2000, Kampen bought his dad’s turkey farm. Four years later, he bought his present farm with the intent of moving both the turkey and egg production to the new location. It was not exactly the start he had imagined. “Four months later, I had a newborn child and Avian Influenza (AI) hit the Fraser Valley,” the producer says.

Although his flocks were not infected, he was in an AI hot zone and among the first wave of farms to be depopulated. Eventually, all commercial poultry farms in the Fraser Valley were depopulated, destroying about 18 million birds in the highest-density poultry production region in Canada. “I had a year of downtime,” Kampen states. AI has hit the Fraser Valley several times since but Kampen has not had to endure any further depopulations.

Kampen now grows about 8,000 birds per year for J.D. Although not organic, they are raised without antibiotics and fed an all-vegetable diet. “The flocks are grown for the four main holidays: Easter, the Canadian and American Thanksgivings and Christmas.”

In 2009, he built a new 190-by-48-foot turkey barn. The facility is big enough to grow his quota in two flocks – one for Easter and the other in the fall. “I think RWA (raised without antibiotics) works because I have so much downtime between flocks,” Kampen states, adding the key to such production is to maintain good water and litter quality.

With that in mind, he reduces the pH in his water to reduce challenges, adds Gallinet+ (an organic acid) to the feed and often top-dresses the litter to keep it dry.

Between flocks, the barn gets a full floor wash. When Kampen built the barn, he put a three-inch drop on the floor to the side doors so the rinse water automatically flows to the side. “I am so happy I did that because it reduces the work,” he says.

If turkey quota increases in future, Kampen hopes to grow a third flock in the summer rather than build a brand new barn.

High tech convention
Unlike the turkeys, his egg farm is a conventional caged layer operation. When he built a new egg barn in 2009, it was 15 per cent larger than he needed. However, with all the quota increases egg producers have since received, he has already expanded it to accommodate about 25,000 layers.

The new layer barn has tunnel ventilation, which Kampen says has made a huge difference. “On hot July days, birds were panting in the old barn but I’ve never seen an open mouth in this barn.”

It is also fully metered, with real-time data available on his smartphone. “I was at a meeting in Calgary and noticed lower feed consumption so I asked my worker to check the feed bin. It was plugged. Having that information available makes leaving the farm less stressful.”

He has not decided how and when, or even if, he will transition out of conventional cages but notes he did build an “adaptable” barn. “It was designed so the beams can be removed to create a floor system. It can also be divided into four zones so I can have an aviary in one or more zones.”

Supply management praise
Kampen is a fierce proponent of supply management, saying the future is bright for the Canadian poultry industry if the system is continued and producers can convince consumers of its benefits. He feels that is easier than many believe. “I was involved in a focus group with adult consumers a few months ago. They liked the camaraderie between growers and that we don’t have to compete with each other. They didn’t fully understand supply management but grasped that with it I wouldn’t be forced out of business by a bigger farm.”