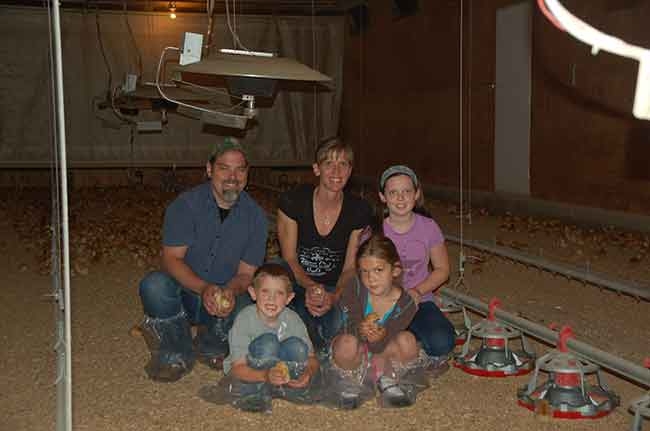 An attempt to earn money for school 25 years ago has led to a thriving specialty poultry business for Trevor Allen of Skye Hi Farms in Chilliwack, B.C.

Growing up on a 3.5 acre hobby farm in Maple Ridge (about an hour’s drive from his present farm), Allen always had an interest in livestock. He began as a 4-H goat pre-clubber, moved to lamb, then ended 4-H with both hogs and beef. At 14, he began hanging around a local feedlot, learning to operate the equipment and some of the ins and outs of commercial agriculture.

When preparing to go to the local college, one of the feedlot owners, Steve Wynnyk, who grew a few turkeys on the side, suggested he grow a batch of turkeys for Christmas.

“I started with 150 turkeys which ended up being 32 pounds each,” he recalls.

He sold them by “cold-calling” on health food and other stores, most of whom had never sold turkeys before. At the same time, he was earning diplomas in livestock production and business management at the University of the Fraser Valley.

As a first-generation farmer and self-styled entrepreneur, Allen “knew nothing about quotas or the supply management system.” He attended a few B.C. Turkey Marketing Board annual meetings (BCTMB) (“I sat in the back”) but basically flew under the radar until 2002, by which time he was growing 1,700 turkeys/year. At that point, then BCTMB-manager Colyn Welsh called.

“Colyn gave me two options: I could cease and desist or I could become the board’s first new entrant direct vendor-producer,” Allen says.

That was his first major turning point. Armed with a permit, he could approach financial institutions for a mortgage, allowing him and his mother to buy his present farm. Although his mother owns half the land and her own home on the property, she has no financial interest in the farm.

By this time, Allen had married his wife Donna. Like Trevor, Donna is a first-generation farmer who went through the 4-H program while growing up on a Fraser Valley hobby farm.

Although “I’m more into large animals,” she is fully involved in the poultry business, noting “turkeys are way easier on fences.”

The Allens now grow about 7,000 hen turkeys/year for Thanksgiving and Christmas.

“We could grow about 2,000 more but I can’t get the quota,” Trevor notes. “I put bids in six times but was only successful once.”

He grows two flocks for each holiday, spaced three weeks apart to offer both 12-week and 15-week-old birds. For the first 4-5 weeks, the birds are kept inside a home-built barn. Once fully-feathered, the birds are turned out onto the range each morning and brought back into the barn each evening. The field is divided into paddocks using movable fencing, with each paddock able to access an open-roofed area the turkeys prefer during inclement weather.

The turkeys are custom-processed as whole birds, then returned to the farm for warehousing, sorting and distribution. They are marketed as certified non-medicated, non-antibiotic free-range turkeys.

“I deliver about 70 per cent direct to retailers myself and the other 30 per cent go through a local meat distributor,” Allen says, noting his website lists all 22 outlets that sell his turkeys. “All my retailers have my number so they can call me with questions or issues.”

In 2004, he put his name on the B.C. Chicken Marketing Board (BCCMB) new entrant list. A year later, the B.C. Farm Industry Review Board’s Specialty Review ordered the boards to increase specialty and regional production by bringing new entrants into the industry. That led the BCCMB to offer him the choice of growing Taiwanese chickens immediately or waiting for a new entrant opportunity in mainstream chicken.

Because FIRB wanted new mainstream production to be outside the Fraser Valley, Allen chose to grow Taiwanese chickens and now grows about 45,000 birds/year. The Taiwanese chickens are grown year-round in 16-week cycles. He was also appointed to the BCCMB’s Specialty Marketing Advisory Committee, along with Rob Donaldson, then the province’s largest specialty chicken grower, and another small grower, Casey van Ginkel.

He and Casey decided they would have more control and perhaps even save some money if they produced their own chicks so they started their own Taiwanese chicken breeder flocks in 2010.

“We bought a barn and equipment from a mainstream breeder going out of business and each took half. Since each of us didn’t need eggs year-round, we formed T & C Chick Sales and arranged our cycles so we could share the eggs,” Trevor explains.

“We learned you need to have at least four breeder flocks with three in production at any time,” he says. Since they didn’t have enough of their own production to make that viable, they started selling chicks to other, mostly new entrant, Taiwanese chicken growers. “We will sell over 600,000 chicks this year.”

Even though Donna insisted she would not pick eggs, Trevor appears to have been very hard-of-hearing that day.

“I ended up doing all the egg picking and still pick 90 per cent of them,” she states, good-naturedly adding, “Trevor’s gotten a lot better the last few weeks.”

T&C’s decision to become broiler breeders got a cold reception from the B.C. Broiler Hatching Egg Commission, even though the commission had decided, following FIRB’s Specialty Review, not to regulate specialty hatching egg production. BCBHEC’s efforts to stymie them resulted in a successful, yet still not fully resolved, FIRB appeal.

In contrast, both the turkey and chicken boards, and their growers, appear to have welcomed Allen with open arms.

He served as a B.C. Turkey Association director from 2003-2015 and has been serving as a director of the B.C. Chicken Growers Association since 2006. Although the BCCGA considers him its “de facto” specialty chicken director, Allen stresses he has been elected by and represents “all growers.”

“Once you get past the marketing, we’re all the same. We all have OFFSAP and we all have biosecurity,” he notes, adding his hatchery, processing and wholesaling experience brings “a different perspective” to the board.

While a director he has chaired the Emergency Response committee, served on the Poultry-in-Motion (educational trailer) committee, the agricultural waste control industry working group, the SE task force and the Sustainable Poultry Farming Group board.

“I try to attend every producer meeting and all the FIRB appeals (even non-poultry) I can. My grandpa told me knowledge is power and I want to be the guy making informed decisions for the betterment of not only my farm but the industry as a whole.”