Controlling the growth rate of broilers is a successful method of improving meat quality. 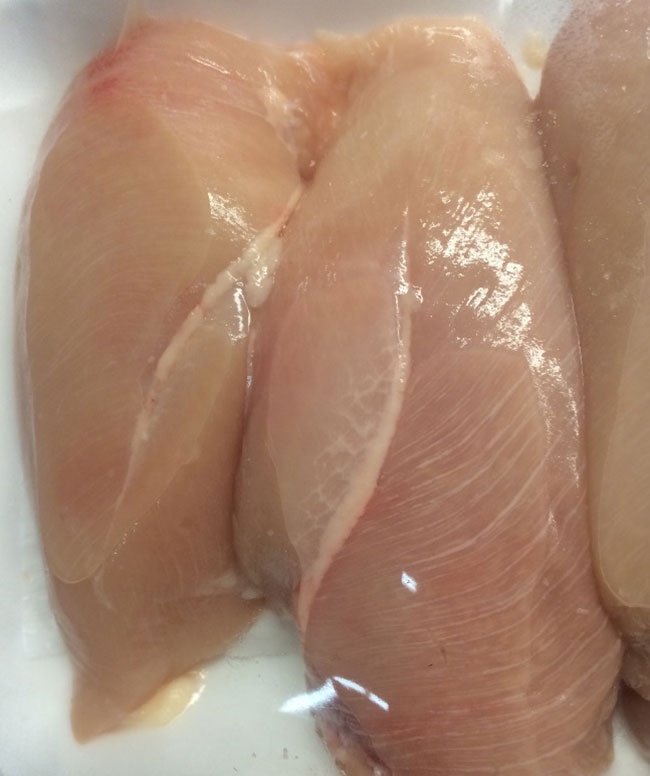 White striping in breast meat found in a grocery store.

According to Statistics Canada (StatsCan), over the last several decades, the per capita consumption of animal protein in Canada has changed dramatically. Figure 1 shows the consumption of three different meats from 1980 to 2014.

The declining trend in beef consumption can be explained by a few factors. Beef production needs a long time to get to market, with a relatively larger carbon footprint. As well, beef products are more expensive. Furthermore, over the last few decades, there have been a few cases of Bovine Spongiform Encephalopathy (BSE) in Canada.

Broiler meat, known for its high protein and low fat content, is viewed as a healthier alternative to red meat. With a shorter production time and a smaller carbon footprint, it has increased its market share over the past few decades. The increase is also due to the fact that broiler meat can be made into value added, convenient products with lower costs at the grocery store level. With its ever-improving performance, the market age of the modern broiler has kept decreasing, whereas the feed conversion ratio (FCR) is continually getting better.

IMPROVEMENT IN BROILER GENETICS
There are many factors that contribute to the low cost of broiler production, such as the prevention and control of poultry diseases, flock management and nutrition, and most importantly, broiler genetic improvement. Figure 2 illustrates broiler performance over the last 20 years, based on 2.9 kilograms cockerel flocks fed by Wallenstein Feed & Supply. The feeding program is a popular feeding program of lower nutritional density. The pre-2013 flock results are based on the Ross 308 breed, and the post-2015 data are mainly from Ross 708 breed.

This genetic improvement has not only greatly affected the growth rate and FCR, but has also significantly altered the birds’ carcass characteristics and physical configuration.

For both the Ross 308 and Ross 708, the percentage of eviscerated carcass weight and breast yield has kept increasing over the last 12 years. Breast meat yield for Ross 308 increased from 18.81 per cent to 22.73 per cent, whereas, yield increased from 20.26 per cent to 24.57 per cent for Ross 708. In 2003, the majority of flocks in Ontario were Ross 308. Currently, most of the Ross flocks are Ross 708. So, the breast meat yield has increased by 30 per cent for today’s cockerel flocks compared to the cockerel flocks from 12 years ago, whereas, the eviscerated weight has increased by 4.6 per cent during this same time period. The FCR improvement referred to earlier did not include the progress in carcass yield; furthermore, the FCR improvement would be much bigger in terms of breast meat yield.

As yield increases and FCR improves, market age keeps decreasing for broilers of the same weight. While the broiler industry is enjoying the progress, there seem to be side effects due to such rapid development. The carcass quality of these fast growing birds has gradually caught the attention of the industry.

BREAST MEAT QUALITY
Over the past few decades, there have been sporadic incidences of two conditions that affect the meat quality of broilers: deep pectoral myopathy and pale, soft, exudative poultry meat.

Deep pectoral myopathy (DPM) is a degenerative muscle disease. It originates from sudden, vigorous and excessive wing-flapping, which leads to a restriction or stopping of the blood supply to the minor pectoral muscle. This creates an oxygen deficiency and causes necrosis or the death of cells and tissues. Depending on the stage of the disease, the lesions vary in colour, progressing from pinkish to grey-greenish. This disease is also known as green muscle disease (GMD).

Pale, soft, exudative (PSE) broiler meat is a problem for the industry of further processed poultry meat. A low pH condition due to rapid glycolysis while the body temperature is still high leads to a pale colour, soft texture and reduced water-holding capacity in the meat.

Both GMD and PSE result in huge economic losses for processing plants. Currently, the most effective way of minimizing the effects of these diseases is through management. To prevent GMD, sudden and excessive activities and loud noises should be avoided during daily practices and when loading the flock to be marketed. To reduce PSE-like meat, preventing and limiting stressful factors such as heat stress before and during pre-slaughter, during transportation should be the main goal of producers. Also, post-slaughter rapid chilling of the carcasses is important to prevent the development of the PSE-like meat.

In the past few years, breast meat abnormalities have been emerging in the industry. It was reported that the occurrence of white stripe (WS) breast and woody breast (WB) have been increasing, as shown in Table 3 (Owens and Alvarado, 2015).

In histology it is observed that the lesions are associated with muscle tissue degeneration, fiber necrosis, and increased connective tissues.

White striping and woody breast abnormalities negatively affect the visual appearance of the breast meat, and thus have an adverse effect on the consumer perception. These muscles tend to decrease marinate uptake and increase cooking loss as a result of increased connective tissues due to fibrosis. This results in increased hardness, gumminess and chewiness in defect fillets, and acceptability to consumers is further lessened. The meat with these defects is downgraded in the processing plant and there is a huge economic loss to the poultry industry.

White striping in breast meat found in a grocery store.

FACTORS AFFECTING BREAST MEAT QUALITY
Due to high growth rate, the breast muscle yield increases mainly with changes in muscle fibre size, because the number of muscle fibres after hatching is fixed. This increased fibre size will lead to a lower capillarization, which may result in an inadequate supply of oxygen and nutrients to muscle cells. In addition, it may also be associated with an inadequate elimination of metabolic intermediate products that can compromise fibre functionality and result in homeostatic dysregulation (Petracci et al., 2015).

In a recent study, Soglia, et. al. (2016) observed that the levels of sodium and calcium in the breast meat with WS abnormalities were higher than those in normal breast meat. Thus, the authors hypothesized that cations can play a role in WS or WB myopathies, due to membrane interruption, which leads to enzyme malfunction. Many factors have been investigated to explore their relationship to these breast meat abnormalities, yet the exact etiology for WS and WB is unknown.

The WS condition appears in all major commercial broiler strains, with higher incidences in high breast yield strains than in low breast yield stains. Flocks with higher growth rates have more incidences than those with lower growth rates. There are higher incidences in cockerels than in pullets. The incidences are increased when the flocks are fed on high energy rations resulting in birds with heavier body weight compared to birds from flocks on low energy diets with lower body weight.

Vitamin E levels in the diets are known to affect the breast meat quality for PSE syndrome, yet recent research has indicated that the WS or WB are not reduced by increasing vitamin E levels in the rations. Also, methionine or total sulphur amino acid levels are not related to these abnormalities. Arginine, an amino acid known as a vasculator that improves blood circulation, had no effect on white striping when added to broiler rations.

SUMMARY
Controlling the growth rate of broilers is a successful method of improving meat quality. Short term measures, including lowering the nutritional density for broiler diets, and marketing birds at a smaller body weight, should be encouraged to optimize broiler production.

As genetics has made progress each year in the past several decades, the growth rate may be close to its biological limit. At the very least, the breast abnormalities should be addressed before any improvements can be made for the growth rate. Thus, as a long-term goal, broiler breeding should be focused on developing high quality carcasses with greater disease resistance, and should keep emphasizing improvements in the feed conversion. More research is necessary to elucidate the muscle defects and improve broiler meat quality. n