Serving up the creation, history and future of Buffalo-style chicken wings 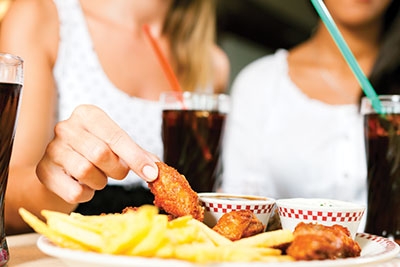 More than 100 million pounds of chicken wings were consumed during the 2012 Superbowl, according to the U.S. National Chicken Council.

It is probably safe to say that Teressa Bellissimo never foresaw that her Buffalo-style chicken would become such an enormous hit.

She created and served the very first plate of wings in 1964 at the restaurant she and her husband Frank owned at the time in Buffalo, N.Y., called the Anchor Bar. The exact facts of just how and why they got on the plate aren’t completely nailed down, and since Teressa, Frank and their son Dominic have passed on, the story will always be a bit murky. Frank used to say it all started because their restaurant had received a shipment of wings instead of other chicken parts, and Teressa created Buffalo wings as a way to get rid of them. Dominic claimed they came about simply because he and his hungry teenaged friends dropped by the restaurant late one night and asked Teressa for a snack. His mom, he says, decided to deep fry some wings and then covered them in her own special hot sauce – serving them with a side of blue cheese dressing and celery because that’s what she had on hand.

And so, Buffalo wings were born.

GOING NATIONAL
For many years, Buffalo-style wings were a regional food in the New York area, but by the mid-1980s, the snack had spread across the country. The city of Buffalo has celebrated Chicken Wing Day every July 29th since 1977, and every year 100,000 people flock to Buffalo’s National Buffalo Wing Festival in early September. And it is not only New York, as Philadelphia is also crazy for wings, and has held a competitive-eating contest known as the Wing Bowl every year since 1993 on the Friday preceding the Super Bowl, where approximately 20,000 people attend the sold-out event every February. Just how many wings are consumed? The 2012 winner set the standing record of eating 337 (yes, 337) wings in 30 minutes.

In 1990, McDonald’s began selling wings at some of its restaurants, with Kentucky Fried Chicken joining in a year later and Domino’s Pizza three years after that. There are currently several restaurant chains with wings as their star offering, and flavours now range from original to lemon pepper, hickory smoked barbecue, cool ranch and many more.

Of course, Super Bowl weekend is unquestionably the time of the year that most wings are eaten. “More than 1.25 billion wings [were] consumed during Super Bowl weekend in 2012, totaling more than 100 million pounds,” states the U.S. National Chicken Council on its website. “If the wings were laid end-to-end they would circle the circumference of the Earth – more than twice – a distance that would reach approximately a quarter of the way to the moon.”

The NCC also says that about 23 per cent of those who watch the big game eat chicken wings, and that they are consumed by three times the number of Americans on Super Bowl Sunday than on a typical Sunday at any other time of the year. About half of the wings consumed are ordered from restaurants, while the rest are purchased from grocery stores.

SUPPLY AND DEMAND
Because the supply of wings is limited to the total number of chickens produced, when the demand for wings is stronger than the demand for other chicken parts – usually every December and January in preparation for the Super Bowl – the price of wings goes up. North of the border, “When the Toronto Maple Leafs do well in hockey, wing sales in the Greater Toronto Area increase,” explains Robert de Valk, general manager at the Further Poultry Processors Association of Canada. He adds, “when the NHL strike was on, the wings piled up.”

De Valk notes that Canadian demand for wings outstrips production by about 30 per cent, and that we import about 30 million kilograms every year, especially during the hockey, football and basketball seasons in the fall and winter. De Valk also points out that over the Super Bowl weekend, Americans consume almost as many wings Canadians do over the course of a year – but per capita, Canadians consume more wings than their U.S. neighbours.

In terms of the actual wing, the NCC says, “proper Buffalo wings should be snapped in half so that they resemble tiny drumsticks rather than their original, harder-to-eat akimbo shape. The vast majority of wings, especially those destined for foodservice, are disjointed, with the third joint (the thin part known as the flapper) being exported to Asian countries and the meatier first and second joints being sold domestically. The wing is usually split into two parts or portions, known as the ‘drumette’ and the mid-section or ‘flat’ and sold to food service or retail outlets.”

WHAT CANADIANS LIKE
Canadians prefer bone-in wings with tip removed, notes de Valk. “Popular sizes in Canada are 10 to 14 wings per kilogram or eight to 10 wings per kilogram, which are a bit bigger,” he says. Whereas jumbo wings from heavier birds are more popular in the United States. However, in both countries, boneless wings (chicken breast meat formed into the shape of a drumette) are gaining popularity.

“They’re catching on in the U.S. more than in Canada, [but] some wing restaurant chains in the U.S. reported 40 per cent of wing sales now are boneless wings,” de Valk reports. “Last year, wings were so popular that wing prices exceeded the price of boneless breast meat for several months.” He adds that, “high wing prices do force wings off the menu, but lower prices quickly result in bringing the item back. This does cause price volatility – but the North American consumer’s love for wings is steady.”

Chicken wings make a great Super Bowl snack, in the opinion of Chicken Farmers of Ontario board member Murray Opsteen, because they are so delicious. “They come with so many types of sauces, they can be dusted or not, they can be small or large, drumettes or wingettes, so everyone can get what they want,” he says. Opsteen remembers a Super Bowl party he and his family hosted many years ago that included five-alarm chili and suicide wings. “Perhaps we went a little far…with a competition to see who could handle the heat,” he recalls. “The person who won really didn’t feel like a winner an hour later.”

The best Grey Cup party Opsteen has ever attended also included wings – and the actual trophy. “It happened after the Argos won,” he says. “It’s nice to wash down wings by drinking out of the Grey Cup. I am sure Saskatchewan fans will have that opportunity this winter.” Opsteen adds – in case you were wondering – that the Grey Cup holds 11 beers. “The most compelling reason wings make a good Super Bowl snack is that they can be eaten with one hand,” he adds, “to allow a free hand to enjoy your favourite beverage.”

Rhonda Tucker, owner of the Millstream Market and Grill in Wellesley, Ont., says wings are by far her best seller. “People want to come in and sit down and have a beer and a plate of wings,” she says. “They love it.”

Every Tuesday is “wing night,” when the restaurant serves a new flavour of wings, and these have included spicy caesar (with hot sauce, caesar salad dressing and parmesan cheese), pineapple curry and sweet chilli Thai. “People text me to ask what this week’s flavour will be,” Tucker says. “At 50 cents each on wing nights, they can try a few and see if they like them without breaking the bank.” Tucker will likely double her order of wings from her supplier again this year for Super Bowl Sunday and hopes the Patriots will be on the field.

To see what sort of wing eater you are, take the Buffalo Chicken Wing Personality Test at www.visitbuffaloniagara.com/food-and-dining/chicken-wings/wing-personality-test/. ■