A look at the environmental footprint of broilers and layers. 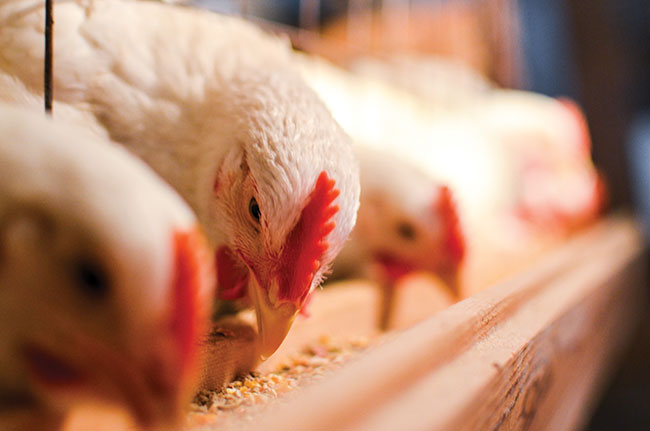 Feed production was found to have some of the highest emissions and resources impacts on the total footprint in broiler meat and egg production. © OLIINYKFOTO/iStock / Getty Images Plus/Getty Images

The term “sustainability” has a lot of different meanings depending on who you talk to and what their opinions are. The United Nations Brundtland Commission’s interpretation of sustainability was developed in 1987 and was defined as “meeting the needs of the present without compromising the ability of future generations to meet their own needs.” In a broad context, global sustainability is an all-encompassing approach that includes natural (environmental), social and economic resources.

Regardless, when people talk about sustainability in the media, the environmental aspect is the one they most focus on, especially as it comes to agriculture. For this article, I will discuss the environmental footprint of poultry, especially broilers and layers. However, it is critical to acknowledge the positive economic and social sustainability that agriculture and poultry production contribute.

Where does poultry production stand?
Several research studies have compared poultry production, egg and meat, in Canada with other livestock sectors. These studies mostly focus on the carbon footprint and greenhouse gas emissions of each sector rather than a full analysis of what each sector can provide.

One of the major differences that makes poultry unique is the bird’s reproductive potential and the resulting creation of consumable protein, whether it is via eggs or meat. A bird generally has a three-week incubation period that is combined with efficient and rapid growth. When we look at protein production, broilers have the highest consumable protein to live weight ratio when compared with other livestock sectors.

All these factors contribute to poultry having low greenhouse gas emissions when compared with other livestock sectors. However, this type of measurement does not take into consideration other aspects that contribute to biodiversity, recycling carbon and other environmental considerations. For example, cattle production (beef and dairy) may have higher greenhouse gas emissions than poultry production, but their responsible grazing helps to maintain natural wildlife habitats and remove carbon dioxide from the atmosphere.

Improvements over time and differences within production systems
Researchers use environmental lifecycle assessments as a tool to study and manage resources and environmental factors in the food supply chain. This type of assessment is most common, most recognized and favoured by the United Nations environmental program. While this type of assessment is a good start to give us an idea of the impact of production, it does not consider many factors such as biodiversity, particulate matter, social and economic impacts as well as consumer preferences.

They have also been done to look at different types of poultry production within a system, such as conventional versus alternative and organic systems in the case of egg production. The values from these assessments can be very region specific, as production in Canada may not match production methods in the U.S. or U.K.

Based on the Chicken Farmers of Canada published data in 2017 comparing the system of broiler production from 2016 versus 1976, there have been strong improvements. Despite a higher demand for chicken meat in 2016, the carbon footprint was 37 per cent lower, 45 per cent less overall water consumption and 37 per cent lower overall non-renewable energy consumption.

A large part of this success can be attributed to factors such as genetics, management and nutrition that have helped to improve broiler production feed conversion by approximately 20 per cent.

Similar positive trends, albeit with different numbers and intensity, have been noted for the USA broiler industry when comparing production between 2010 and 1965. In both countries, feed production (e.g., producing feed, growing grains) made up the largest portion to contribute to the environmental and resource impact.

Different grains had different impacts depending on water use, contribution to nutrient run-off, ecosystem acidification and release of nitrogen. Work completed in the U.K. showed the environmental impact of grains also changed depending if the grain had to imported or was grown locally. Overall, however, the different grains did require less water, land and energy to grow compared to historical grains.

Based on the environmental life cycle assessment of the Canadian egg industry published in 2018 comparing the system of egg production from 2012 to 1962, there have been strong improvements. Due to the timing when this assessment was completed, it focused mainly on layers raised in conventional systems.

Demand for eggs, and resulting egg production, increased substantially during this time period, over 50 per cent, and yet the overall environmental footprint decreased. The industry’s total emissions were decreased by 41 per cent for ecosystem acidification, by 51 per cent for contribution to nutrient run-off and by 57 per cent for greenhouse gas emissions.

Despite the larger demand for eggs, the industry’s total demand for energy, land and water use decreased by 10 per cent, 71 per cent and 53 per cent, respectively. The improvements in emissions and resource use over time can be attributed to many factors that include feed composition and feed efficiency as well as improvements in animal health, productivity and resource use.

The egg system for U.S. production conducted a similar assessment between 2010 and 1960 and found comparable results that were largely attributed to feed efficiency and egg laying potential.

As alternative systems have become more the norm since 2012 in Canada, other environmental life cycle assessment studies were published by researchers at the University of B.C. in 2018 to look at their potential differences. The systems they assessed were conventional, enriched, free-run, free-range and organic.

Overall, the patterns the researchers noticed were similar between the conventional, enriched, free-run and free-range systems. These patterns showed that composition and amount of feed consumed accounted for an average of 35 to 81 per cent of resource use and emissions, while manure management contributed the second highest with 17 to 46 per cent.

We must applaud the poultry industry for constant improvements in production, resource use and emissions. However, it is always important to continue to improve. Some methods could be to work on the largest contributor to emissions, which would be feed and manure management. Aiming to continue to improve efficiency and optimize nutrient cycling can be some example strategies for moving forward.

How can environmental sustainability relate to bird efficiency?
The connection between bird and intestinal health with environmental sustainability may seem far-fetched. The flocks have an amazing capability to turn feed (e.g., grains, by-products of different processes) into food (e.g., meat and eggs). To maintain this efficiency at its optimum level, it is important that the bird has as minimal stresses as possible so the body can be focused on digesting and absorbing nutrients.

The other side of poultry production is that what goes into the bird must come out of the bird as manure. Feeding as close to the requirements to the bird’s needs as possible is one step to reduce an overflow of nutrients being excreted into the manure. However, there is always a fine line to understand what is economically achievable, variation in raw materials used in the diet and the integrity of the gut to make an efficient exchange.

Different feed additives can be used to control overfeeding of some nutrients. For example, phytase can be used to release bound phosphorous from grains to avoid overuse of added phosphorus that can be excreted and contribute to nutrient run-off. Another way to reduce the potential for nutrient run-off is the use of proteinated trace minerals that are readily absorbed by the animal.

Nitrogen emissions to the atmosphere is an environmental concern that some regions focus on which can be partially addressed with feed. Nitrogen is a part of protein that the bird has to consume to grow. This protein is broken down in the bird and then released in several ways into the manure as different molecules that contain nitrogen. One of these molecules is ammonium that can be released into the air as ammonia.

As birds are fed closer to their true nitrogen requirement needs there is less nitrogen excretion and ammonia losses from the manure to the atmosphere. Another way to help reduce ammonia losses to the air is the use of litter amendments or through the feed with different binding products such as from the Yucca schidigera plant. However, if a plant extract is being used to combat this issue then there has to be an environmental sustainability plan in place to offset the harvesting of the plant.

Where to go from here
Overall, poultry production in Canada and in other parts of the world have reduced their total environmental footprint over time. This article only focused on the environmental impact, but it is crucial to highlight the positive economic and social benefits of the poultry industry.

Feed production was found to have some of the highest emissions and resources impacts on the total footprint in broiler meat and egg production. Recent research has looked at methods to formulate feed based on the carbon footprint of the grain, but this adds cost. However, different nutritional strategies can be used to improve different aspects that contribute to the total production environmental footprint.

As of yet, biological systems are not 100 per cent efficient at converting feed to food so there is a limit on the impact of nutritional and health strategies that have to be combined with other methods to improve emissions and resource use.