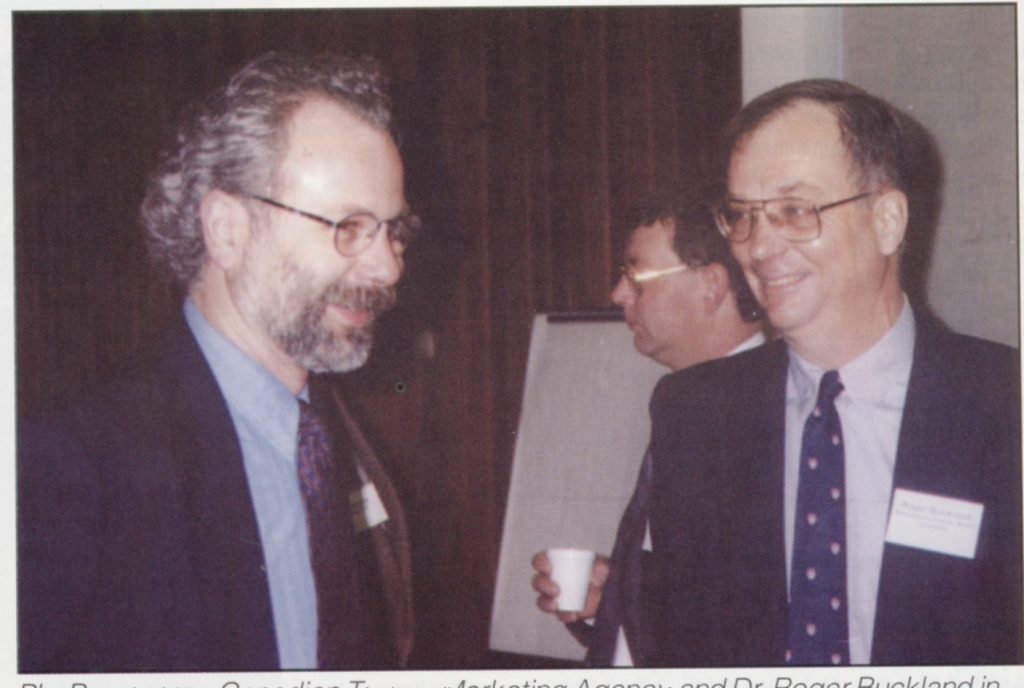 Phil Boyd of the Canadian Turkey Marketing Agency and Dr. Roger Buckland in discussion prior to the meeting on poultry research resources and needs.

By any standards, there’s a lot less activity in Poultry Research and Education than was apparent twenty years ago. Obvious examples are the closing, in 1997, of Agriculture and Agri-Food Canada’s Centre for Food and Animal Research in Ottawa, and the progressive disappearance over two decades, of separate Departments of Poultry Science in several Universities. The federal presence in research with a specific poultry focus is now limited to one scientist working at the Agassiz station in BC. A few others work with birds from time to time, and this is also true in the university environment, but many commercial poultry producers would be hard pressed to identify a scientist they could consult on contemporary industry problems.

Two years ago, the Canada Branch of the World’s Poultry Science Association initiated a process to identify the resources available and the needs of science and industry for the next decade. This program was led by Dr. Roger Buckland of MacDonald College, McGill University. Buckland is a longtime poultry researcher, and former Dean of the College’s Agriculture Faculty.

Surveys were designed to identify all people involved in Poultry Research, Education and Technology Transfer, and to solicit from them their opinions as to the adequacy, or otherwise, of the available resources and output.

Of particular interest was the survey of industrial “users” of poultry science and technology: Do they have an adequate pool of expertise, and are people entering the industry adequately trained?

The results of the survey were presented and reviewed at a workshop held in Ottawa in November, and attended by more than sixty interested participants.

– Confederation of Canadian Faculties of Agriculture and Veterinarian Medicine

– Egg and Poultry Producers of Canada

Dr. Bill Stevens from Guelph, Ont., gave the supplier perspective, and Dave Coburn, a producer from New Brunswick dealt with tech. transfer as a user. Stevens has been involved with another study, commissioned by the Poultry Industry Council, into the specific capability of the University of Guelph in the context of Ontario’s poultry industry, and he presented his results to the workshop. He spoke of the “Technology Train” consisting of basic research, leading to applied research, followed by technology transfer and commercial application.

Basic research is largely devoted to advancing scientific knowledge with little immediate direct application. It is funded largely by federal bodies such as the Natural Sciences and Engineering Research Council (NSERC) and provincial governments (OMAFRA in Ontario.)

Applied research is also funded by these groups but industry contributes in specific areas where immediate benefits in terms of practical knowledge are visible. Technology transfer is often aided by provincial governments but is also targeted by industry in terms of competitive advantage.

Commercial application has resulted in enormous gains in productivity over the past half-century, plus gains in efficiency and competitiveness.  More recently, gains in quality assurance and food safety have resulted from the application of research.

Dave Coburn has enthusiastically embraced new technology in the past two decades, including a computerized layer barn, rapid composting of poultry waste and a state-of-the-art feed mill.

However, Coburn noted the decline in poultry research capacity in the past decade, particularly at the federal level, where expenditures of several million dollars shrunk to $768,000, with just one scientist dedicated to full time poultry research.

Now Is The Time To Rebuild

Coburn commented on lack of inter-University communication, as a serious problem, plus the apparent decline in tech. transfer resources.  He said there is increased reliance on US data when Canadian data are lacking.  Where provincial sources had disappeared, Coburn looked for the emergence of other vehicles for Tech. Transfer, including the Internet and a possible Virtual Poultry Department for Canada, one of the suggestions made by Roger Buckland in his questionnaire

Dr. Frank Robinson, of the University of Alberta, reviewed the results of Buckland’s survey of research resources. He said he found some poultry research in fifteen different institutions.

However, this is somewhat deceptive, because only nine showed one or more person-years of combined research, teaching and extension activity. Only in the Universities of Alberta, Saskatchewan, Guelph and McGill, were there more than four person-years. It was also emphasized that with the exception of Guelph, the majority of the positions were non-tenure, indicating potential lack of continuity if “soft” money is not renewed.

In terms of area of interest, most energy is devoted to nutrition (almost 10 person-years), with genetics and breeding (3.3), disease and pathology (3.6) some distance behind. Poultry production (2.8), physiology and biochemistry (2.7) and poultry meat science (1.3) were the only remaining fields with more than one person-year allocated. When one considers that this effort is spread across the entire country, the extent of Canada’s challenge in poultry science becomes clear.

The survey also reviewed the capacity for research in terms of facilities, and here the situation seems more favourable, with good facilities available for broiler and layer research available in several locations.

Fewer facilities are available for turkeys and broiler breeders, but these species still receive considerable research attention in relation to the size of the respective industries.

Imbalances seem to occur, however; University of Laval has capacity for over 2000 turkeys, yet none were used in the period under discussion.

A review of funding sources showed that slightly more than half came from industry with the balance from other grants. It is assumed that this funding does not include the provision of the infrastructure such as laboratories and animal facilities.

Robert Gauthier of Jefo Animal Health and Nutrition gave the perspective of the research user.

He painted a bleak picture of poor communication of results, inadequate funding compared with other animal species, and lack of coordination in priority setting and resource utilization.

Gauthier offered as solutions, the following:

– Concentrate research among two or three solid institutions within Canada;

In subsequent discussion of this presentation, Martin Pelletier, of the Canadian Poultry and Egg Processors Council, suggested at least one tool already exists for better communication and coordination of research. This is the Index of Canadian Agricultural Research (ICAR), which has recently been updated and is available on-line. From this database, researchers can rapidly extract very specific categories of current research. All scientists were urged to list their current projects on the Index.

Dr. Steve Leeson, University of Guelph, gave the “supplier” perspective on teaching and education in the field of poultry science. Some university agricultural science programs, including those at Guelph, no longer include “production type” courses.  Teaching capability is much reduced compared with two decades ago. However, poultry species are used as examples in course work on scientific disciplines such as nutrition, genetics, physiology, etc.

Leeson, while acknowledging their need, questioned whether production courses were necessary at all institutions. A “Virtual Poultry Science Department” had been proposed in Dr. Buckland’s survey and received widespread support. Dr. Leeson suggested this may be a method of presenting production courses to students at a variety of institutions. He also suggested the same method for presenting industry to students. He has experienced great difficulty in getting access to commercial hatcheries, processing plants etc. because of biosecurity and other concerns.

His company employs a number of university-trained graduates in extension and administrative roles, and is probably typical of many organizations across the country. He underlined the need to inspire an interest in poultry early in students’ academic careers, and noted that success in this area is highly dependent on individual professors’ ability to spark that interest.

Bailey pointed to the Midwest Poultry Consortium, in the US, which had built up a system over the past decade embracing a number of universities which now cooperate in recruiting students and providing poultry production courses. Industry has spearheaded this initiative and supports it financially, as well as providing scholarship and internship opportunities for students.

This presentation further emphasized the need for active encouragement of students to enter the poultry field and then the provision of introductory and advanced courses to stimulate continued involvement pointing to an attractive career path.

While the use of the “Virtual Department” concept could contribute to these ideals, there would still be the need for the “evangelical professor” to get the process started with motivated students.

There is no doubt that these individuals are highly successful where they are active.

The delegates were assigned to one of five working groups to discuss these presentations in depth, and report back to a general session at the end of the day.

During these discussions, the potential role of the Poultry Industry Council for research and education was highlighted. Because it is an industry-funded group, the council is well placed to undertake some of the work of coordination, priority setting, and allocation of research funding.

It may also be in a position to initiate the so-called “Virtual Poultry Science Department,” whose major role might initially be the development of production-type undergraduate courses to meet the expressed needs of industry in the next decade.

Dave Nodwell, recently appointed Executive Director of the PIC, attended the workshop and participated in the discussions. He believes the PIC will rise to the challenge and become Canada’s voice in poultry research and education.

The conclusions of the discussion groups are being summarized and a complete report of the meeting is being developed by Dr. Buckland. Industry and the university community will then be expected to act on these findings to carry Canada’s poultry industry successfully into the future.